Face it: the future is here

Biometric authentication is being rolled out across various industries – and the possibilities feel endless. 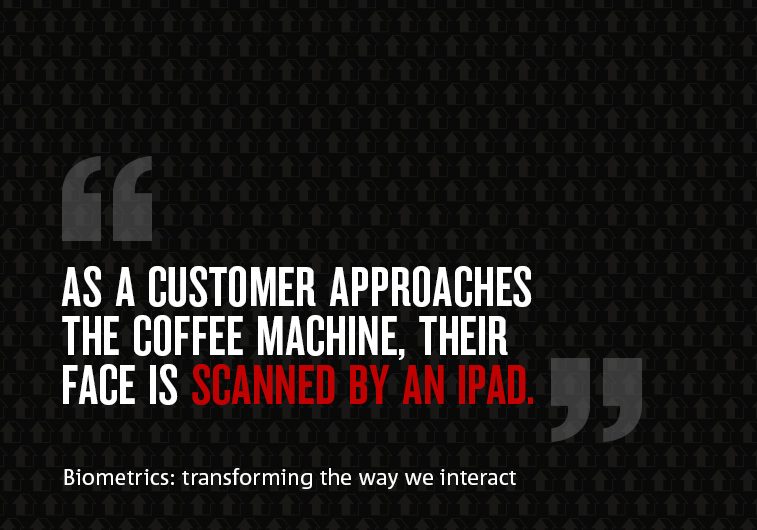 When regular customers approach the counter at the Bahista Cafe in central Sydney, the server already knows their name, their favourite order and whether they’re due for a loyalty bonus. It’s thanks not to the server’s great memory but to technology. As each customer approaches the coffee machine, their face is scanned by an iPad and matched to the cafe’s database of customers.

The technology was developed by cafe owner Geoff Copely with coder John MacLean after he struggled to remember customers’ names. It will be rolled out to other cafes and businesses in Australia and around the world under the name NoahFace.

It’s just one example of how biometrics is transforming the way businesses transact and interact with their customers.

Biometric authentication involves verifying an individual’s identity with their unique physical characteristics, such as their face, fingerprints or voice. In future, it could also involve behavioural attributes, such as the unique way each individual holds their smartphone.

The technology is already widely used by most Australians, even if we don’t think of it as biometrics. Consider how many people log on to their smartphones dozens of times a day using their fingerprints, or press their fingers to their phones to confirm the purchase of a song or app.

Biometrics has a couple of compelling advantages. Firstly, it’s often faster than entering a PIN or password, which are prone to be forgotten. Secondly, it’s more secure, although experts point out that, like all security systems, it isn’t totally foolproof.

Until now, the technology has primarily been used to make payments more seamless and for logging on to devices, but it will be used much more widely in the years to come. In future, bus and train passengers are set to pay for their journeys by clicking on and off with their thumbprint rather than with transport cards as they do now.

Government services will also be transformed. In fact, the Australian Taxation Office (ATO) gives taxpayers the option of recording and saving their voiceprint when they ring the ATO to eliminate the need to answer security questions every time they ring.

The Department of Immigration and Citizenship, meanwhile, requires certain visa applicants to submit a facial image with a digital camera and a 10-digit fingerprint scan with a digital finger scanner when they apply for a visa, which it says will help protect visa applicants from identity fraud and strengthen Australia’s border security.

Financial institutions and credit card companies are experimenting with biometric identification, with some allowing users to snap a selfie to prove their identity for online purchases and others using fingerprint identification for in-person purchases.

NAB customers can now perform tasks such as requesting their account balance simply by asking their Amazon Alexa-enabled device. NAB for Amazon Alexa lets customers who have connected Alexa with their NAB account to ask their device questions such as: “What’s my savings account balance?” or “Did I get paid this week?”. This is one way that biometrics can improve and even transform the customer experience and points to new ways that customers will interact with businesses.

In the future, instead of using apps or websites, some businesses might need only a minimal user interface (or even possibly no user interface) to interact with their customers. In what’s known as zero user interface, users will transact with a wide range of businesses through an application like Alexa, using just their voice.

It’s a technology that will present huge challenges to many businesses to adapt, but also huge opportunities.

My inspirational mum: CEO keeping family at heart of her business

Re-Affirming our rate view and an update on the outlook for QE.