US equities and commodity currencies boosted by President Xi’s calming talk overnight – but @NAB’s Ray Attrill warns we can continue to expect periodic risk off sentiment.

The working title for today’s missive when I went home yesterday was ‘Go Your Own Way’, following the news that Lindsey Buckingham has been fired from Fleetwood Mac ahead of their upcoming world tour. But seeing the global market reaction to yesterday’s comments at the Boao Forum from President Xi, Big Love seems wholly more appropriate (incidentally, a song also written by Buckingham originally intended for a solo album after leaving the Mac the first (or was it the second?) time round. Anyway, having had the privilege of seeing and listening to one of the world’s finest guitarists in the Hunter Valley in 2015, I’m not surprised that Mick and Co. has enlisted two guitarists to try fill his shoes in Neil Finn and former Tom Petty and the Heartbreakers guitarist Mike Campbell. Good luck to then both.

I digress. So, the impact on markets during our time zone yesterday of President Xis comments, in particular the references to reducing car import tariffs and protecting intellectual property rights of foreign entities, was accentuated offshore.  Seeing is believing of course, especially on the latter, but for now the market chooses to believe that Xi’s words will prove to be more than mere platitudes in coming months. They prompted President Trump to tweet “very thankful for President Xi of China’s kind words on tariffs and automobile barriers…also, his enlightenment on intellectual property and technology transfers. We will make great progress together!”

US stocks have just closed with gains of close to 2%, US bond yields are about 2bps higher on average and the three dollar-bloc commodity currencies (AUD, NZD and CAD) are vying for top spot on the G10- FX leader board with gains of between 0.75% and 0.9%. Predictably, the risk sensitive JPY sits at the bottom (thus AUD/JPY is 1.25% up on this time yesterday). The AUD evidently came to no harm following yesterday’s NAB business survey, which showed both business conditions and confidence pulling back, though in the case of conditions from record February levels.  They still remain well above average (and in trend terms, in all five states). We’ll here more on the latter from RBA Governor Phil Lowe later today from Perth.

Commodity prices are mostly higher (platinum one exception) led by oil with both Brent and WTI crudes p over $2 or 3.5%, Brent is trading close to $71, a new post-2014 cycle high. As well as drawing support from the perceived reduced threat to global growth of a US-China trade war, gains have also come off the back of source reports that Saudi Arabia wants to get oil up to $80 a barrel to support its fiscal spending programme and ahead of the float of its state energy giant Aramco

Elsewhere in currencies the EUR has experienced a round trip up and down. It shot up 50pips after the ECB’s Ewald Nowotny, the Austrian central bank governor and a known hawk, indicated that he’d prefer rates to move sooner than mid-2019 (the current consensus) and potentially at 20bps increments. Following these comments an ECB spokesperson emailed a statement that “Governor Nowotny’s views are his own….they do not represent the view of the Governing Council”.  A sharp rebuke it has to be said, and which saw EUR give up all the earlier gains, though it has since pulled back up.

GBP also caught a bid from central bank commentary, in this case the BoE’s Ian McCafferty who told Reuters there was some modest upside risk to the wages and inflation outlook and that the Bank “shouldn’t dally when it comes to tightening policy modestly”.  A rate hike in May is priced at around a 90% probability. We expect one to be delivered.

US data overnight saw PPI coming in above expectations in both headline and core terms (to 3.0% and 2.7% y/y respectively) and which at the margin implies some upside risk to CPI tonight (see below). The NFIB small business optimism survey slipped to a still elevated 104.7 from 107.6. 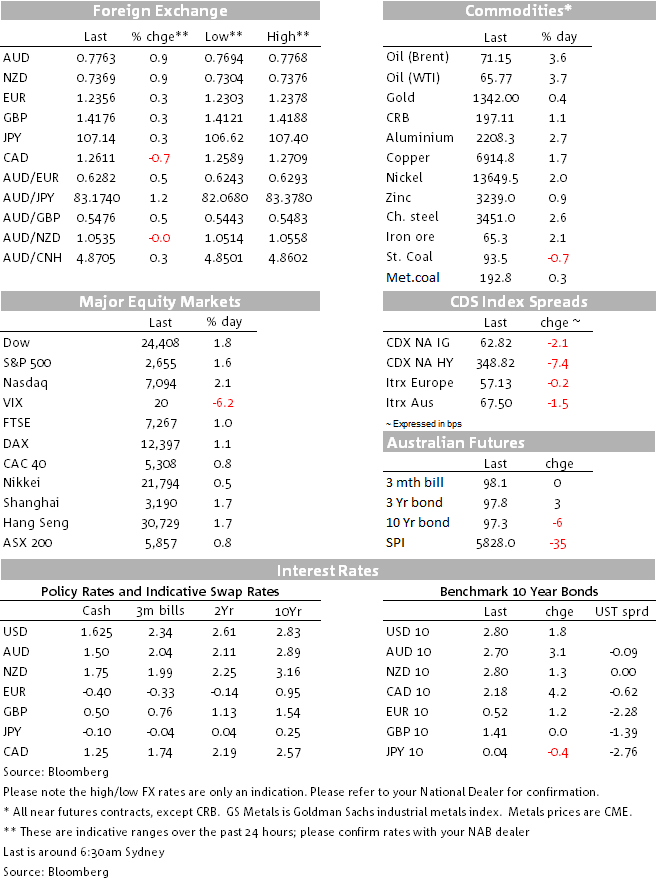