Another day of equity gains and commodities prices. Markets are still basking in the glow of the Pfizer/BioNTech vaccine having received regulatory approval on Monday. China’s delta outbreak also appears to be under control with two consecutive days of no new domestic cases.

“I can’t stop the feeling; So just dance, dance, dance, come on; Ooh, it’s something magical; It’s in the air, it’s in my blood, it’s rushing on; I don’t need no reason, don’t need control; I fly so high, no ceiling, when I’m in my zone”, Justin Timberlake 2016

The tide of optimism seems to have set in, with another day of equity gains (S&P500 +0.1%), rising commodity prices (Brent Oil +3.5%), and higher commodity linked currencies such as the AUD (+0.7%) and NZD (+0.8%). Markets are still basking in the glow of the Pfizer/BioNTech vaccine having received regulatory approval on Monday, which is paving the way for organisations to mandate vaccines for workers and thus lift vaccination rates higher (e.g. US Military and New York City’s school districts mandated jabs). China’s delta outbreak also appears to be under control with two consecutive days of no new domestic cases (only one suspected case), while the PBoC vowed to boost credit support for smaller businesses and the real economy.

The Fed’s Jackson Hole Symposium looms as the next key test, though expectations are not high after uber hawk Kaplan on Friday clipped his own wings , stating he may need to adjust his immediate call for tapering if the Delta variant slows economic growth materially. Given the uncertainty it is likely the Fed needs to see another one or two stellar payroll prints, though a taper announcement in 2021 is still likely (September, November or December). Ahead of Jackson Hole US Treasury yields lifted with the 10yr +4.2bps to 1.29%. A stellar 2yr bond auction with the highest indirect participation since 2009 at 60.5% helped the curve steepen.

In terms of market moves, the S&P500 is currently up 0.1% having reached an intra-day record high earlier in the session. Gains were led by cyclicals, particularly energy (+1.6%) and materials (0.7%) which were boosted by gains in commodities. Travel and leisure stocks were also up on the day. As for commodities, Brent oil is up 3.5% to $71.16 per barrel, now up about 9% for the week so far. Iron ore traded on the Singapore exchange rose 11.9% to USD152 per tonne. Most commodities in Bloomberg’s index are higher, with the index itself up 1.4% following yesterday’s 2.2% gain.

Commodity sensitive currencies have unsurprisingly outperformed, with the AUD +0.7% and NZD up 0.8%. The other majors show little movement against the USD (EUR +0.2%, GBP +0.1% and USD/Yen -0.1%), though the broader BBDXY is down -0.2% overnight. One factor behind the NZD’s outperformance on top of commodity prices was the lift it got after Bloomberg reported an interview with Assistant Governor Hawkesby. The comments were not new, though noted a 50bps hike was still a possibility. Most commentary from the RBNZ post the August meeting has been on the hawkish to very hawkish side. My BNZ colleagues note monetary policy needs to be directed towards getting the economy on a more sustainable footing by removing policy stimulus to get the OCR back to at least a neutral level of 2% to contain inflationary pressure. BNZ’s economics team is fully onboard with this view, with a long series of rate hikes expected beginning October.

Finally one piece of data worth contemplating that wasn’t market moving was the US Richmond Fed Manufacturing Index which fell back more than expected. The headline index fell to 9 from 27 against 24 expected. While still well positive, the comments to report noted “several manufacturers reported deteriorating local business conditions”. The lower than expected report follows a weaker run of regional fed surveys and suggests downside risks to the wider Manufacturing ISM next week. As consumers pivot from goods to services, manufacturing conditions could start to ease.

Domestic focus will remain on virus numbers, while Q2 Construction figures will be one of the first partial indicators for Q2 GDP which is out on Wednesday 1 September. Offshore it is very quiet with only the German IFO and US Durable/Capital Orders of note. Details below: 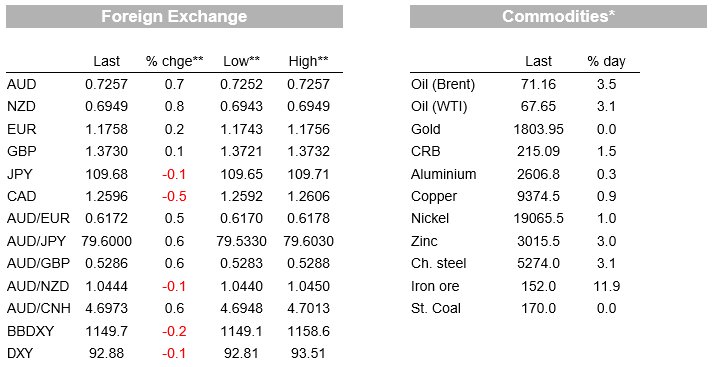 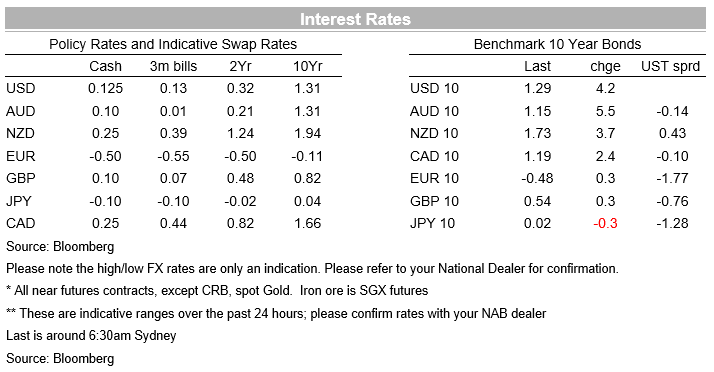