It’s gonna be a burn out, All around this town, The South North is up, But the North South is down – The Clash

The FOMC meeting and travails of Chinese property developers Evergrande hogged all the headlines last week. The net effect was outperformance (and net small scale gains) for major northern hemisphere stock markets, while all major APAC bourses lower. The Hang Seng, on which Evergrande and other Chinese property developers are listed, was by far the biggest loser. The USD ended Friday – and the week – slightly higher and the AUD virtually unchanged on the week, after giving back a good chunk of Thursday’s gains on Friday. US and other benchmark bond yields were all higher on the week – Australia more so than elsewhere – while the US yields curve exhibited both strong flattening and steepening tendencies between the FOMC decisions being handed down on Wednesday afternoon US time and Friday’s New York close – curves ending the week little changed overall.

Looking across stock market globally, of some note is that all major European and US stock indices ended higher (or at worse flat in the case of the NASDAQ) while all Southern Hemisphere stock market were lower (but with a hat tip to the NZX50, which finished the week +0.2% and was the exception). Arguably this does reflect some contagion from the travails of Evergrande – who by all accounts did not meet its coupon payment obligations on a dollar bond by close of busines of Thursday, but who cannot be declared in default on the bond until 30 days from the date of the missed payment.

Evergrande and broader Chinese property sector worries showed up in iron ore prices hitting a low of $90 on the Singapore futures exchange on Monday, before ending the week at $116.50, while Japanese stocks have reversed some of the recent strong outperformance – earlier driven by hopes for stronger fiscal support for the economy into and out of the upcoming elections.  Japanese firms with exposures to Chinese property sector all suffered last week (paint, toilet and air conditioner makers most notably). Hang Seng aside (-2.9%) the ASX 200 and Nikkei were the worse two performing stock market globally last week, both down by 0.8%.

Bond markets enjoyed a proverbial roller-coaster ride last week, with significant curve flattening in the immediate aftermath of the FOMC (e.g. the 5s30s curve down to around 95bp from above 100bps) most of which was reversed on Friday to leave US curves little changed overall but yields smartly higher in outright terms (e.g. 2s up 5bps and 5s through 30s all up by 8-9bps). No doubt the relatively hawkish utterances out of the Fed have been a major driver, while at the global level the likes of the Norges Bank, being first cab off the G10 rank with a rate rise and promise of another by year end, and another twist to the lately more hawkish Bank of England tale, both contributing. While the RBA continues to buck the trend of other central banks in its signalling,10 year Aussie bonds fared amongst the worst in G10 last week, 10s up 10bps against 8-9bps for Gilts and Treasuries and 6bps for Bunds.

Fed Chair Powell didn’t make any market moving remarks in the town Hall he hosted on Friday, while Cleveland Federal Reserve Bank President Loretta Mester and Kansas City Fed President Esther George both said that the economy had made “substantial further progress” toward the Fed’s maximum employment and 2% inflation goal. “I support starting to dial back our purchases in November and concluding them over the first half of next year,” Mester said during an event organized by the Ohio Bankers League, while George told the American Enterprise Institute, “The rationale for continuing to add to our asset holdings each month has waned”. Mester also admitted hers is one of the 2022 rate hike dots.

The PBoC response to Evergrande and fears of financial sector contagion (read credit crunch) has been to make generous liquidity provisions to banks, with a further net addition of CNY50bn announced on Sunday, following a net Y70bn addition on Friday and closer to Y100bn at mid-week. The Yuan has so far been notably unaffected, still trading comfortably inside a 6.40-6.50 range, consistent with our view that the authorities have no interest in a weaker Yuan at this point (and also suggesting we are not seeing large scale capital outflows sufficient to counter ongoing strong inflows from current account surpluses).

In G10 currencies, Friday saw the USD regain some of its mojo lost after the FOMC meeting and which had seen AUD lift to as high as 0.7315 on Friday morning. The DXY and BBDXY indices both ending Friday about 0.25% stronger and on the week just over 0.1% firmer. AUD (-0.5%) and NZD (-0.75%) were the worst performing major currencies Friday but on the week AUD/USD is little changed and NZD/USD off a lesser 0.4%. USD/JPY was the largest G10 mover on the week thanks to the lift in US Treasury yields, while GBP continues to give back outperformance won early in the year.

GBP weakness, in the face of an unexpectedly hawkish Bank of England last week – is in the context of ongoing chronic supply chain issues in the UK, with something like half of UK petrol stations having ‘no fuel at the inn’ and long queues outside those that do have supplies. The UK government at the weekend announced that up to 4,000 people will be trained up as HGV drivers and short-term visas will be offered for foreign hauliers, as part of a package of measures aimed at helping tackle the driver shortage. How much of a dent this can make on the estimated 100,000 shortfall remains to be seen; we suspect not a lot.

Finally, in commodities and despite the travails of Evergrande that saw iron ore in particular under strong additional downward pressure at the start of the week, everything we track, bar lead, had an up-week while gold was flat. Iron ore ends the week some 9% stronger than when it began, crude up 2.8-3.7% and base metals ex-lead all higher with the LMEX index +0.9%. Hardly consistent with the Chinese property sector collapsing in a heap. 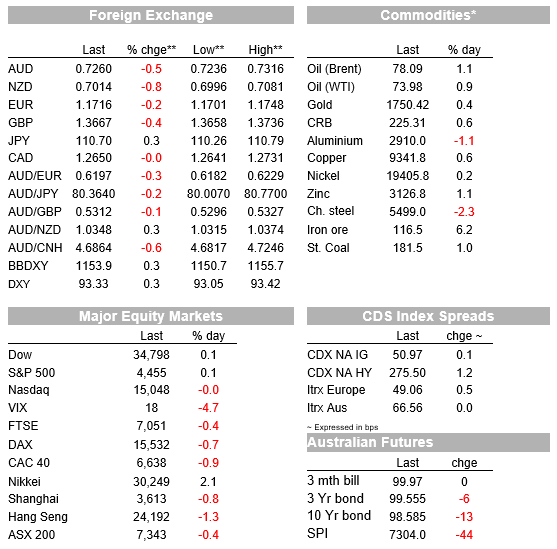 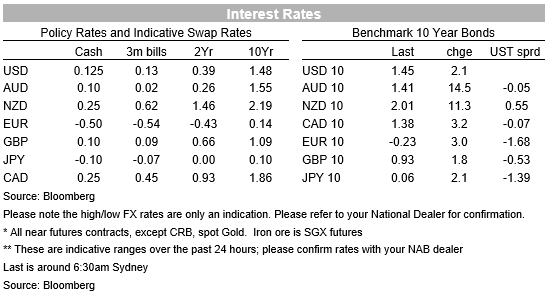