US equity losses accelerate into Thursday’s close; worse month for S&P500 since March 2020

Written shortly for before his untimely demise, long time New York resident David Bowie here expresses his lack of regret at leaving England. Global investors have thought similarly this week, GBP/USD one of the worse performing major currency pairs, albeit pipped to the wooden spoon by the flightless bird that is NZD, the latter off 1.5% since last Friday’s NY close.

Markets are ending a fairly torrid week, month, quarter, half-year (Japan) and full fiscal year (United States) with the USD back from its intra-week highs but still up 1.25% on the week (DXY) and equities still losing ground in what has been the worse month for the S&P since March 2020, the very early stages of the pandemic. It’s down 4.5% in September, with the last ‘hour of power’ on Wall Street seeing the S&P’s daily loss extending from -0.4% to -1.2% and every sub-sector deep in the red led by Industrials (-2.1%).

10-year Treasury yields were still sitting above 1.50% (1.51%) before the late-day fall in stocks pulled the yield back to 1.495%, down 2.2bps on the day. This is still some 20bps up on the month and following the Fed’s perceived hawkish pivot the week before last and which has received limited push back from Fed officials this week, not least Fed chair Jay Powell in various Congressional testimonies. Overnight, Powell alluded to the “difficult trade-off” which the Fed would face if inflation doesn’t subside, as it is expecting.

There’s been no lack of news overnight, none of it instrumental in driving the performance of equities or bonds, though support for commodity-linked currencies has come from a Bloomberg report that China’s Vice Premier had ordered state-owned energy companies to secure supplies for winter “at all costs” to avert any blackouts. Oil prices rebounded after the report, with Brent crude oil trading near a three-year high, while Chinese coal futures earlier hit a record high. So as well as the direct support for AUD from firmer energy prices, the news goes some way to allaying fears that rolling power outages in China will be adding more weight to China’s current growth challenges, on top of sporadic covid-related lockdowns and the structural changes China is bringing to bear on various sectors. At least yesterday’s China Services PMI yesterday was of some comfort in this regard, rising from 47.5 To 53.2, even though the official manufacturing PMI fell into contractionary territory (49.6) for the first time since February last year.

As for the Evergrande saga, to no-one’s surprise media reported it had failed to make coupon payments on another USD bond on Tuesday. With its USD bonds trading at around 25 cents in the dollar, investors have already priced an almost certain default. There is keen interest in what if anything provincial governments might do over the week-long Golden Week holiday regarding protection for those who have paid deposits for houses as yet unfinished, unpaid suppliers, etc. In the meantime the PBoC has continued to provide chunky net additions to money market liquidity this week, and has reportedly urged banks not to unnecessarily tighten lending standards for other developers and homebuyers.

The influence of month-end flows on currencies proved to be USD negative, in that the DXY USD index lost about a quarter of a percent in the hour running up to the 4pm London fix (and AUD/USD up 0.5%), moves which were largely retraced during the New York afternoon. The DXY index nevertheless is down 0.1% on the day and AUD/USD still up 0.7% to be Thursday’s best performing G10 currency. Yet having failed to hold what was looking like decent support building just above 72 cents earlier in the week, we start the new month with limited confidence that we can necessarily now build on Thursday’s rally.

Economic news overnight included French and German inflation figures. France’s EU harmonised CPI for Sep fell by -0.2% but rose in annual terms to 2.7% from 2.4%, a tenth less than expected. In contrast German CPI rose by a tenth more than expected, 0.3% on its harmonized measure, to be 4.1% yr./yr. from 3.4% (big base effects at play here). This is the first time Germany inflation has been above 4% since 1993.

In the US, weekly jobless claims rose to 362k last week from last 351K and 330k expected. Rather than necessarily implying that the underlying trend in claims is now rising, with implications for future non-farm payrolls numbers, our friends at Pantheon Economics suggest it may just may be that the numbers are still elevated as a result of delayed claims triggered by Hurricane Ida, together with currently unhelpful seasonal factors. US Q2 GDP growth was revised up to 6.7% (saar) from 6.6%. the Atlanta Fed’s latest GDPNow estimate is currently picking 3.2% for Q3, slower than the 5.0% consensus. 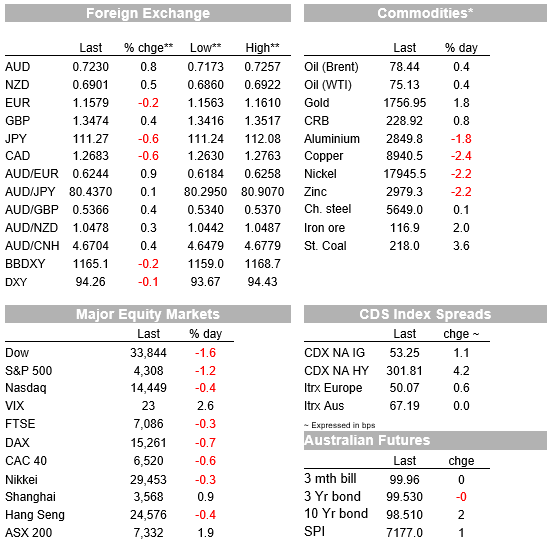 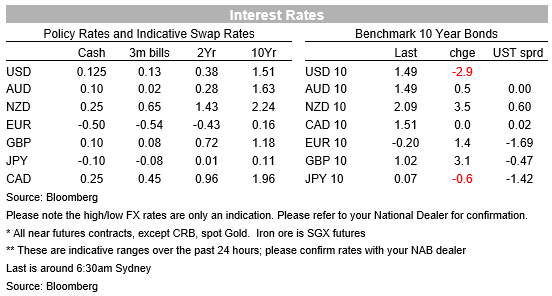