Markets Today: Stagflation consternation as OPEC sticks to the plan

NSW meeting the 70% full vaccination target may be announced as early today (more likely tomorrow) in which case it may well attract more local media headlines than the RBA meeting.

When do you think it will all become clear, ‘Cause I’m being taken over by the fear – Lily Allen

Big-tech is leading a decline in global stocks on the first day of the week, today seemingly more on the fear than actuality of higher interest rates given US bond yields, though up a couple of basis points up ion the day, are still beneath last week’s highs above 1.50% at 10-years. The global energy crisis meanwhile, and arguably today’s main source of broader stock market weakness, is being aggravated by the failure of OPEC+ to agree to  production increases beyond the 400,000 rise already slated from November. Brent crude is at its highest since October 2018 and thermal coal at new record highs above $240 a metric tonne. The USD is, perhaps a little surprisingly, softer not stronger, and while the Swiss Franc and stronger commodity -linked currencies are part of the story, both the GBP and EUR are also firmer, begging the question of whether a lot of USD-positive news is now already priced? (spoiler alert – that question remains unanswered in this missive)

At the NYSE close – now an hour later for us (ex-Queensland) Australian folk – losses for the NASDAQ outpacing the S&P500 almost by a factor of two, with all of the FAANG stock taking a beating, symptomatic of higher interest rate fears – now within the context of the raging ‘stagflation’ debate. The latter has been given a further leg up by the latest rise in oil and other fossil fuel prices, after the virtual OPEC + gathering agreed only to maintain the existing agreement to lift production by 400,00 barrels per day in monthly increments – the ne xt one slated to start in November. Brent crude hit a high of $82 (up $3.5 on Friday’s close) before coming back to $81.30 at present. Thermal coal (Newcastle benchmark) closed at $240, a rise of $12 on the day. As a result and supporting the S&P500 relative to the NASDAQ has been a near 2% rise in the Energy sub-sector and rise of more than 1% for Utilities, partially offsetting the 2.7% fall for IT (and falls all other S&P sub-sectors). Earlier Monday, European stocks all ended down but none by more than 1% (the Eurostoxx 50 fared worse, -0.96%)

China remains very much in the spotlight notwithstanding the Golden Week holiday. Developments here include the suspension of Evergrande’s shares on the Hong Kong Stock Exchange prior to yesterday’s open, pending an announcement – according to one Chinese media source – that a rival Chinese property developer (Hopson) was poised to take a 50% stake in Evergrande’s Property Services u nit (and possible to its Electric Vehicle unit). No additional news on this front overnight.

Also to note is a speech from US Trade Representative (USTR) Katherine Tai In which she says the US intends to have frank conversations with China on its trade ties, including discussion over Beijing’s performance under the Phase One Agreement (which, US officials say pointedly, have not been met). Tai claims that the Biden Administration’s objective is not to inflame trade tensions with China (good luck with that). Late last week there were reports the White House might be planning to row back on some of the tariffs currently placed on imports from China, but that is evidently not about to happen. Rather, Ms Tai said only that the U.S. will reopen a process for U.S. companies to seek exemptions from tariffs. Recall that the Trump administration created an exclusion process for companies that could show they had no viable alternative to Chinese imports, but the Biden administration had allowed that process to expire.

The FX market sees commodity linked currencies faring better, predictably led by NOK (+0.7%) followed by CAD (0.6%) with AUD ‘only’ up 0.4% but having spent a brief time back above 0.73 (0.7290 now) and NZ bringing up the commodity currency rear (0.2%). That the USD is softer not fimer (DXY -0.25%) owes something to this, as well as a 0.7% rise in the safe-haven CHF, though of note too is that the GBP (+0.5%) and EUR (+0.2%) are both up without any obvious positive news drivers.  A sign, perhaps, that both currencies may have got a little bit oversold last week, in which respect also note that last Friday’s IMM positioning data shows a further slight extension of speculative net short positions in the AUD from what were already record levels. 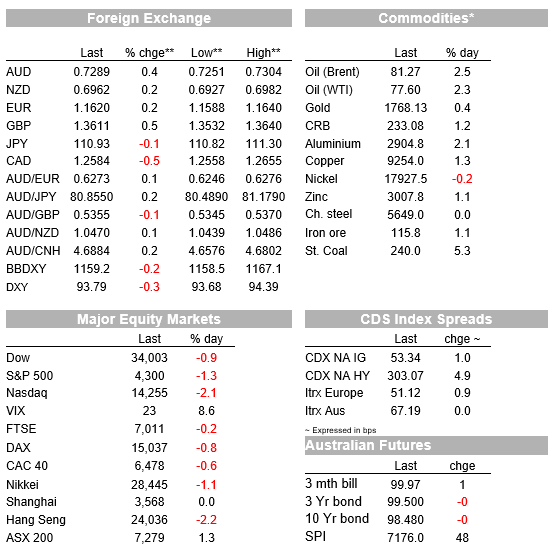 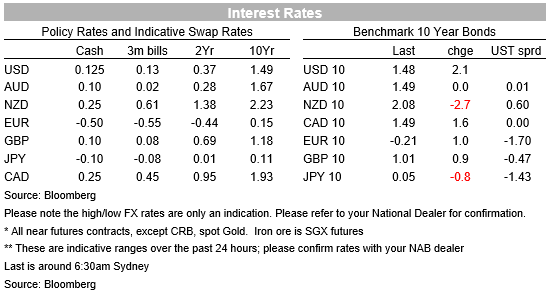