The ‘Quit Rate’ is the highest on record, reflective of the ease which workers are switching jobs, in part at least for better pay or conditions elsewhere.

‘Twas then he felt alone, And wished that he’d gone straight, And watched out for a simple twist of fate – Bob Dylan

Amid a mixed performance from currencies overnight but which has left the USD at new YTD (and indeed 13-month) highs via slippage in EUR,  JPY and CHF and a rather flat US equity market performance, so too most commodities, some of the more interesting market moves have been in bond markets where the US yield curve has twisted round the belly of the curve to see the 2/10s curve some 7bps flatter and 5s/30s by 8bps. US money markets are now entertaining the prospect that Fed rates lift off come sooner than late 2022, with a now close on 50% chance a first move comes as early as July. US CPI is the main economic draw in the coming day and which has the potential to see Fed rate hike expectations move again, one way or another.

There’s been plenty of economic news flow and commentary from officials overnight, including the IMF unveiling its latest forecast as part of its Autumn gathering. The IMF expressed concern that the global economy has lost momentum and that different economies are more divided in their performance. It cited the impact of Delta, supply chain strains and strength in inflation – particularly for food and fuel – behind downgrades, despite which the IMF says that central banks ‘should move quickly if the risks of rising inflation expectations become tangible’. It downgrades global growth to 5.9% for this year from 6% in July but 2022 is kept at 4.9%, within which the US estimate for this year is cut to 6% from 7% (2022 up to 5.2% from 4.9%) China to 8.0% from 8.1% (2022 to 5.6% from 5.7%) and with downgrades elsewhere for 2021 in Germany, Canada and the UK amongst others.

Fed speak has come from Atlanta Fed President Raphael Bostic, who said he’s be comfortable commencing taper in November but that rates lift-off is ‘more than a year off in my forecasts’.  Fed Vice Chair Rich Clarida, who incidentally and vis-à-vis recent revelations about stock trading says he had conducted himself honourably during his public service – sounded, overall, rather centrist in his remarks, still playing the ‘largely transitory’ card regarding inflation and repeating the mantra that tapering is not a signal about the timing of rate rises.

From the ECB side, Chief economist Philip Lane is still having none of it regards current high inflation and the central bank’s reaction function, saying ‘fundamentally (supply chain) bottlenecks will resolve themselves and that a one-off shift in wages does not imply an inflation trend’.

On the data front, The latest JOLTS (US job opening) numbers, for August, showed a fall 10.44 million from 11.1 million In July 2 – below the 10.95 million still far in excess of the numbers currently looking for work. More telling perhaps the ‘Quit Rate’ at 2.9% of those in work is the highest on record, reflective of the ease which workers are switching jobs, in part at least for better pay or conditions elsewhere. And while the NFIB small business optimism survey dipped to 99,.1 from 100m, below the 95.5 expected , 30% of small business owners in the US said they expect to lift wages.

In Germany and apropos the IMFs growth downgrade, the ZEW survey showed the ‘current situation’ falling by much more than expected, to 21.6 from 31.8

Yesterday, the latest NAB Business Survey showed a sharp lift in business confidence, up 19 points to +13 in September. The lift in confidence was driven by NSW (to +27.2 from -14.9) and by VIC (to +5.2 from -10.8) ahead of re-opening given re-opening plans were unveiled in the month. Conditions of course fell due to the lockdowns to +5 from +14. With NSW re-opening yesterday and VIC set to in a few weeks, the business survey suggests activity should rebound strongly. The prices components of the survey remain elevated with retail prices 3m annualised running at 6.1%, well above its long-run average of 2.0% and suggests some underlying inflation pressures. Purchase costs are also very elevated with the 3m annualised running at 7.8% and well above its long-run average of 3.7%.

In the UK, Labour market data were much as expected with a big rise in employment (23k in the last 3 months) and the (ILO measure) of unemployment down to 4.5% from 4.6%, while wages growth remains very strong if down on July (6.0% in 3m Y/Y terms versus 6.8% previously). UK Brexit minister Lord Frost speaking in Lisbon says the Northern Ireland protocol isn’t working and has lost consent, though overall his remarks come across as somewhat conciliatory, talking of putting the protocol onto a ‘durable footing’ He says though it is up to the EU if it wants to insist on no change, but if it does the UK has Art.16 at its disposal (to end the NI protocol) – though says the UK won’t use this gratuitously. The risk of a complete breakdown in November, with the UK outright refusing to subjugate itself to the ECJ in any disputes, remains live and with that the threat of the EU imposing tariffs on UK exports.

US stocks have just closed with the mainboard indices a touch lower and nothing to write home about; ditto no outsized moves in commodities.. 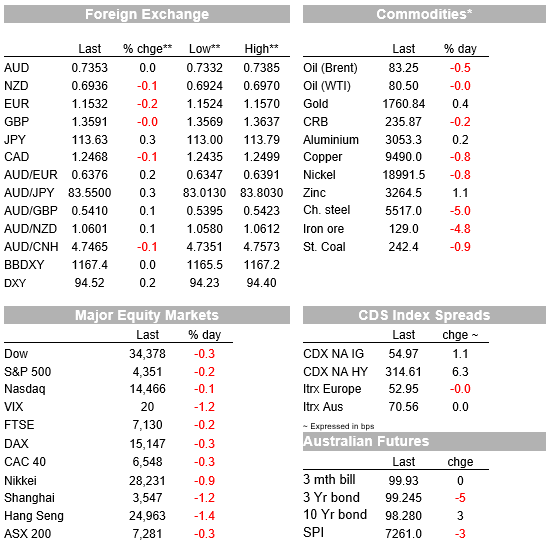 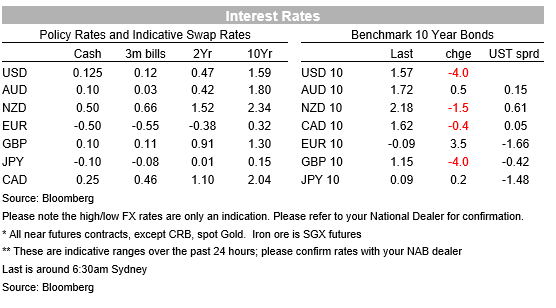