The BoE shocked markets overnight with its thunderous silence.

Unreliable boyfriend number two shocked global rates markets overnight with the BoE keeping rates unchanged after Governor Bailey and Chief Economist Pill had walked markets up the rate hike hill (the decision was 7 v 2 with Ramsden and Saunders dissenting). UK yields tumbled with 10yr Gilt yields -13.7bps to 0.93%. Those moves were echoed globally with the US 10r yield -8.8bps to 1.52% and the implied yield on the Aussie 10yr bond future is -9.0bps. Real yields bore the brunt of the move with the 10yr TIP yield -9.1bps to -1.05%, while the implied inflation breakeven was little changed at 2.57%. Curves flattened with the US 2s10s curve down -2.3bps to 110.49bps with the 2yr yield down by less. In FX, GBP was unsurprisingly the global underperformer, plummeting 1.2%. Other FX pairs with well-priced hike expectations also fell with AUD -0.6%, along with NZD (-0.8%) and USD/CAD +0.5%. The USD rose with the broad BBDXY +0.4%.

First to the BoE which shocked markets overnight with its thunderous silence. The BoE MPC held rates unchanged in a 7 vs. 2 decision, sharply surprising markets which had fully priced a 15bp rate hike at the November meeting after having been walking up the hill by Governor Bailey and Chief Economist Pill since October. UK press headlines have dubbed Governor Bailey ‘unreliable boyfriend number two’ after the initial moniker was applied to his predecessor Carney in 2014. Governor Bailey though rejected the accusations, noting his earlier comments of the BoE “will have to move” was contingent on inflation expectations becoming unanchored which the BoE did not think was happening and Governor Bailey described market pricing as “overdone”.

The reason for the BoE in holding rates was to see additional information around the labour market after the end of the furlough scheme, while it also appeared demand prospects were weakening from inflation hitting household real incomes. The BoE’s inflation projections show inflation peaking by 5%, but then retracing to be back marginally below 2% at the end of its forecast horizon. Note the BoE assumes a market path for rates. Nevertheless, the BoE is still signalling the need for higher rates with markets now pricing around an 85% chance the BoE will hike in December (See BoE MPC Minutes for details).  The UK rates market was completely wrong footed by the decision, with the 2-year bond rate tumbling 21bps and the 10-year rate down 13.7bps, to 0.93%. The GBP is the standout mover in the currency market, down 1.1% to 1.3501.

Norway in contrast stuck to its rate hike path, flagging a December rate hike after it held rates as expected overnight. Governor Olsen was explicit “Based on the Committee’s current assessment of the outlook and balance of risks, the policy rate will most likely be raised in December”. Note the Norgesbank was the first developed economy central bank to hike back in September. While global supply chain disruptions could contribute to higher inflation, the recent krone appreciation could curb the rise in prices. Across the border in the Euro Area ECB officials continue to push back on the prospects of a 2022 hike with the ECB’s Schnabel stating “ conditions…for raising rates are very unlikely to be satisfied next year” and that there were “good reasons to believe that inflation in the euro area will visibly decline over the course of next year”. Schnabel’s comments follow ECB President Lagarde on Wednesday who said it was “very unlikely” the conditions for a rate hike would be met in 2022.

FX moves were dominated by the reaction to the BoE with GBP down a sharp 1.4% to 1.3503. The sharp fall in GBP spilled over to other markets where rate hikes are well priced with the NZD -0.8% and AUD -0.6%. The EUR also fell, down -0.5% with more pushback by ECB speakers overnight on the prospect of hikes as early as 2022. The broad BBDXY was up 0.3%, with USD/Yen -0.2% outperforming. The policy divergence between the ECB and the Fed is back in investors minds with the Fed tapering on Wednesday and Powell opening up the prospect of hikes by saying it is possible maximum employment could be reached by mid-2022. It appears there has been a dovish pushback by some central banks in recent weeks against market pricing (e.g. ECB, RBA and now BoE).

Risk sentiment nonetheless remains positive with equities up . The S&P500 rose +0.4% with technology stocks outperforming (NASDAQ +0.8% and the S&P500 IT sub-index +1.6%. The profit reporting season continues to shine with chip maker Qualcomm up some 13% after seeing a 56% rise in smartphone chip sales. Equities have shown little reaction to the Fed’s decision on Wednesday to taper asset purchases with the S&P500 up +1.4% for the week so far.

Oil prices fell overnight with Brent -1.6% to $80.69. The fall came despite OPEC+ keeping to its current plan of increasing monthly production by 400k barrels per day. Analysts attributed the fall to profit taking after earlier positioning and headlines of Saudi Arabian oil output soon exceeding 10m barrels per day for the first time since the pandemic. The US Administration criticised the decision. The next OPEC meeting will be on December 2.

As for data, ahead of US Payrolls tonight the NFIB reported 44% of businesses had raised compensation, a record high level for the survey which dates back 48 years, and another record 32% expect to raise compensation in the next three months. The survey broadly aligns with the official data with US Jobless Claims overnight lower than expected at 269k against the consensus of 275k and well down on 283k previously. The US Trade Balance was broadly as expected at -80.9bn against the -80.2bn consensus. Negotiations around the US infrastructure packages continue with Democrats set to vote again as early as Thursday on the social infrastructure package and on Friday on the already Senate-approved $1tn infrastructure bill ( WSJ: Pelosi Pushes House Toward Votes on Infrastructure, Social-Spending Bills). Ahead of Payrolls tonight though

Finally, in Australia quarterly retail sales volumes for Q3 were very strong outside of the states that were in lockdown during the quarter, showing the economy was strong in Q3 ahead of the easing of restrictions in Q4. At the headline level retail volumes fell 4.4% q/q (consensus -5.0%). Meanwhile the trade balance dipped on lower iron ore prices, but the trade surplus still remained very elevated at $12.2bn from $14.7bn.

The RBA SoMP is domestically. Details below: 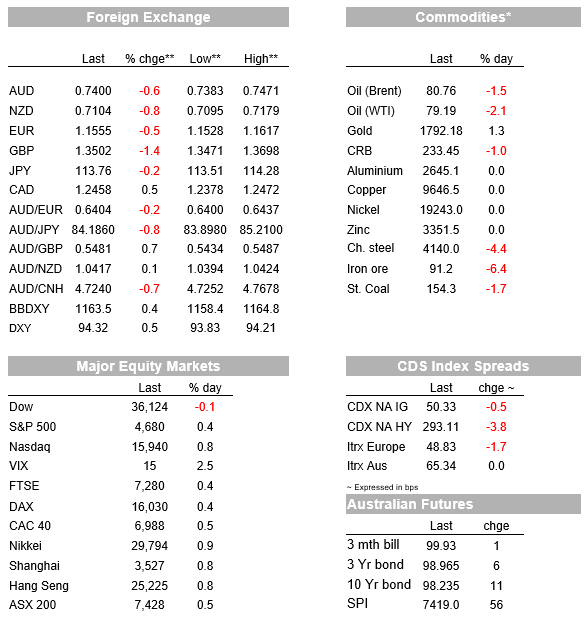 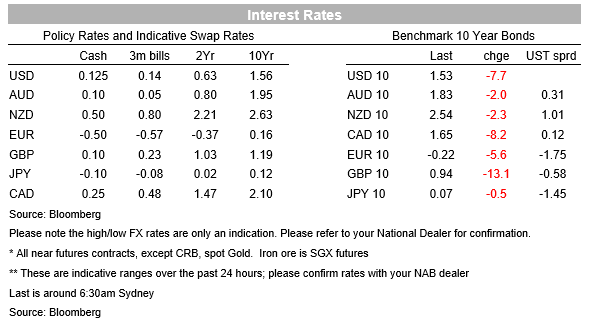