President Putin spoke to the media saying that “of course” Russia does not want war in Europe, but then added that his security concerns must be addressed and taken seriously .

It’s on a rumour mill, the word is on the street, I
I don’t know how to feel about what you say to me – Rudimental

Markets continue to blow hot and cold fanned by the Russia-Ukraine winds. On Tuesday the risk off move was instigated by reports satellite images were suggesting Russian troops were on the move, then after Sydney went home yesterday (or moved from the study to the living room) headlines hit the screen noting  “Russian troops partly returning after drills are completed” followed by reports that  “Putin tells Scholz Russia a reliable energy supplier”. Then adding to the rumour mill, later in the overnight session Stoltenberg head of NATO confirmed they have not seen any signs of troop withdrawals. Markets have gone with the initial overnight headlines, embracing the good news, the equity board is a sea of green with the Eurstoxx 600 closing 1.43% higher while main US equity indices are up between 1% and 2%. Oil has had a decent decline and the US Treasury curve is steeper ahead of the FOMC Minutes tomorrow morning. The USD a tad weaker, softer against European currencies and a tad stronger against safe haven pairs. AUD start the new day at 0.7153.

Following a four-hour meeting with Germany’s Chancellor, Olaf Scholz, President Putin spoke to the media saying that “of course” Russia does not want war in Europe, but then added that his security concerns must be addressed and taken seriously . Russia’s military said that some troops were withdrawing from the border near Ukraine, but then NATO and Western leaders said they have not seen no evidence of the withdrawal yet. And on a less conciliatory tone, Putin then added that NATO had so far failed to address Russia’s “basic” security concerns, demanding the issue of Ukraine joining NATO be addressed now. The Ukraine is in NATO’s Membership Action Plan (MAP), a long intricate process that may pave the way for the Ukraine to eventually join NATO, years down the line and assuming it meets all the requirements. Importantly, however, NATO’s position is that it is Ukraine’s right to determine its own future and foreign policy, without outside interference. Thus, for now there appears to be no change in both Russia’s and NATO’s positions.

All that being said, markets have embraced the positive headlines (and ignore the more intricate details) with European and US equities enjoying a nice rebound after three days of negative returns . In Europe the Euro Stoxx 600 index gained 1.43% while most regional indices closed up between 1%. and 2%. As I type main US equity indices are up between 1 % (The Dow) and 2% (NASDAQ) with the S&P 500 up 1.45%. Tech stocks (1.96%) and Consumer Discretionary (1.93%) are leading the gains with Energy (-1.27%) and Utilities (-0.5%) the only two sectors in the red. The fall in energy is explained by the sharp decline in both Brent (-3.30%) and WTI (3.6%), a war premium unwind has helped ease some of the pressure, that said the oil market remains tight with supply concern issues challenged by an increase in demand as economies look to rebound from the latest (Omicron) covid wave.

After flattening over the course of the previous 6 days, the 2s10s US Treasury curve is enjoying a decent rebound, steepening from 41 to 48bps over the past 24 hours. Following recent hawkish Fed talk (Bullard in particular) the 2y note is down 1.3bps to 1.564% while the 10y tenor is back above 2% (2.03% to be precise) and up 4.7bps since this time yesterday. Geopolitical headlines and jump in equities have been the main drivers for the price action with US data releases not eliciting much of a market reaction.

US January PPI jumped 1.0%mom, double the consensus, 0.5% with the core reading also beating at 0.8% vs 0.5% expected. Rising food and energy prices lifted the headline PPI, but the big surprise was the uptick in the core reading from the jump in both the goods and services components, up 0.8% and 0.7% respectively. Goods prices were boosted by a 1.1% jump in capital equipment prices, the biggest in 41 years while services prices were hit by big jumps in hospital charges. For now, the narrative is that price pressures have not yet peaked, although there are still good reasons to expect an ease in pressures come April or May and for the remainder of 2022.

After a sharp decline in January, the Empire manufacturing survey rebounded by a smaller amount than expected . Climbing to 3.1 from -0.7 and well below the 12 expected by the market. New orders and shipments rose only modestly, to 1.4 and 2.9 respectively; both were in the high 20s in November and December. The survey remains suppressed and it remains to be seen if this is the start of a weakening trend.

Moving onto FX, the USD a tad softer in index terms with the DXY and BBDXY indices down around 0.25% and 0.37% respectively. European currencies have been the outperformers, reflecting a higher degree of sensitivity to the Russia Ukraine news. SEK is up over 1% and the euro is up 0.47% to 1.1358, after trading to an overnight low of 1.1280. Almost two weeks ago the ECB pivot lifted the euro close to 1.15, so is worth remembering the potential for the euro to rebound if the Russia Ukraine news continue to improve.

The AUD and NZD have also benefited form the uplift in sentiment, both up around 0.3% over the past 24 hours, but still remain well within their recent trading ranges. The AUD opens the new day at 0.7152 while NZD is at 0.6638. Meanwhile languishing at the bottom of the leader board, JPY and CHF are down around 0.1%, loosing some of their safe-haven appeal.

Looking at commodities, in addition to the fall in oil prices, iron ore is the other big mover, down 8.42% to $135. Prices on the bulk commodity tumbled yesterday as China intensified its campaign to rein in prices for the steelmaking material after big gains in recent months. Authorities in Beijing have stepped up actions to stop prices overheating amid renewed efforts to keep inflation in check.  In the latest warning, officials have summoned iron ore trading companies to meet Tuesday to “ensure the smooth operation” of the market, state media Futures Daily reported, citing a document it said was circulating among market participants. As it has been the case for some time, AUD showed little reaction to big move down in iron ore. 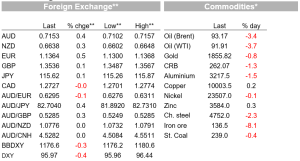 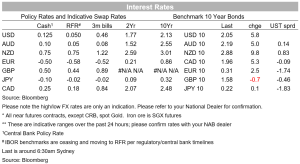