US equities reached new highs again on Friday even though the jobs numbers were lower than anticipated.

Friday’s weaker than expected US employment report failed to dent the bullish enthusiasm in US equity markets or the upward trajectory in US bond yields of recent days and weeks. On the contrary, the data merely served to strengthen expectations that Congress would reach an agreement very soon on a fiscal support plan that can be in place before year-end. The net result was equities closing at new record highs and 10-year US hitting 0.97%, so knocking on the door of 1% and at the highest levels since March. The USD was little changed overall Friday but down over 1% on the week in index terms, Friday’s FX outperformer being the CAD on a stellar Canadian  employment report and with tailwinds from higher oil price still blowing. A post-Brexit UK-EU trade deal has still not been done and GBP has opened softer this morning.

Nonfarm payrolls growth in November was a disappointing 245k, lower than the 460k consensus and down on October’s 610k (revised from 638k). Private payrolls were 344k, with some 100k census workers falling off the government employment register to depress the headline number.  In any other year, a near 250k monthly employment gains would have been celebrated as good news, but not this year when you consider this still leaves employment some 9.8 million below pre-pandemic levels, and the unemployment rates of 6.7% more than 3 percentage points above its pre-pandemic lows. The surge in Covid-19 cases in the US in recent months has evidently put the brakes on hiring in certain sectors, with retail seeing a net 35k job loss on the month and job growth in the leisure and hospitality sector falling from 270k to just 31k. Average hourly earnings rose a stronger than expected 0.3% with annual growth now well above 4%, but the numbers are distorted by compositional effects (slower growths growth in relatively low paid sectors – the data is not mix adjusted).

In Canada in contrast, where covid-19 infection rates remain much lower that across the border, its labour market data was unequivocally good news, with 62k jobs added more than three times the 20k expected (+99k full time jobs) with the unemployment rate by down by 0.4% to 8.5%, well below the 9.0% expected and with a mere 0.1% drop in the participation rate.

The positives of vaccine roll out – we might hear from the FDA on approval of Pfizer-BioNTech’s vaccine this week – and stimulus hopes – where over the weekend reports are that Senate leader Mitch McConnell may now be on side with the $908bn bipartisan-crafted bill – meant that the S&P 500, NASDAQ and Russell 200 indices all went out at record highs Friday, up 0.9%, 0.7% and 2.3% respectively on the day. These indices are all up +/-2% on the week, with lesser gains elsewhere in the world and the German Dax actually lower. The latter was despite the strong German October manufacturing orders data on Friday (+2.9%) led by a 3.2% rise in foreign orders (+4.8% from outside the EU) and which brings them pretty much back to pre-pandemic level – testament to the strength of China’s recovery

Bonds had a big week last week, the US 10-year Treasury yield closing in on 1%, a level that hasn’t been reached since the March crisis.  The 10-year yield was 6bps higher, finishing the week at 0.97%, while yield curves continued to steepen.  There was no change in 2-year yields, with the Fed still expected to remain on hold for the foreseeable future, but an 8bp rise in the US 30-year rate. Market-based inflation expectations continue to push higher as well, with the US 10-year ‘breakeven inflation’ rate rising 4bps, to 1.91%, its highest level since mid-2019.

The US 10-year breakeven inflation rate increased 16bps last week, driven by improving global growth prospects and higher commodity prices. It is now within sight of the 2% milestone that hasn’t been seen since late 2018.  The increase in breakeven inflation last week was greater than the 13bp increase in 10-year US nominal yields meaning US real interest rates actually fell on the week –  a factor relevant to the ongoing decline in the US dollar, even though nominal spreads over Bunds and other international benchmarks are widening out. Australia bond yield felt the pull from US markets last week, the 10-year futures equivalent yield up by 9bps.

FX moves were relatively restrained on Friday bar the CAD which was the top performing currency, up 0.6% on the day and also the best performer on the week (+1.6%) with the aforementioned support from Friday’s strong employment data augmenting the earlier tailwind of higher oil, the latter on vaccine roll out hopes and after OPEC cobbled together a compromise deal to gradually lift production by increments of no more than 500,000 over coming months. The USD was overall little moved Friday while AUD and NZD were both softer, AUD by 0.2% and NZD down 0.4%. The AUD/NZD cross looks to have established a base above 1.04 last week. On the week, USD indices are a little over 1% lower, a 1.3% rise in EUR/USD the main contributor.  AUD was 0.5% up on the week and NZD 0.3%

GBP was flat on Friday but still up 1% on the week but has opened lower this morning after weekend talks between UK PM Johnson and the EU’s von der Leyen failed to produce a breakthrough. Negotiators are now back at the table. Some reports this morning suggest that a deal may be in the air regarding fishing, but who knows and also whether those countries with closest trade ties with the UK – France, Belgium and the Netherlands, will be ready to accept anything other than UK agreement to a genuinely level playing fled regarding the UK’s inability to ‘unfairly’ subsidise any of its own industries. Enforcement mechanisms also remains a key sticking point. If a deal is to be done, it will almost certainly have to come in time for this Thursday and Friday’s EU Summit.

The progress or otherwise on agreement to a US fiscal support bill aside, Europe should be hogging the headlines this week, with the ECB on Thursday and EU leaders holding a Summit on Thursday and Friday. Will the EU have the outlines of an EU-UK trade deal to sign off on, can Hungary and Poland’s objections to the EU Recovery Fund be overcome or will the other 25 member states decide to go without them, and how aggressive will the ECB be vis-a-vis additional stimulus measures? Consensus is for more TLTROs and an additional EUR600bn (+/-) being added to the PEPP bond buying programme (QE) and to extend from June 21 to at least the end of next year. Vaccine headlines will also be closely watched with the US FDA currently assessing the emergency use applications for Pfizer/BioNTech and Moderna with the FDA’s vaccine committee meeting on Thursday.

Australia has the NAB Business Survey on Tuesday and the W-MI Consumer Sentiment Index is on Wednesday.

Today, we get the China trade figures where the consensus sees Exports +12.0% y/y and Imports +7.3%, up from 11.4% and 4.7% respectively in October. China CPI/PPI (Tuesday) should continue to show disinflationary forces with the PPI remaining in negative at -1.8% y/y and CPI down to 0.0% from 0.5% on weaker food prices (pork in particular). 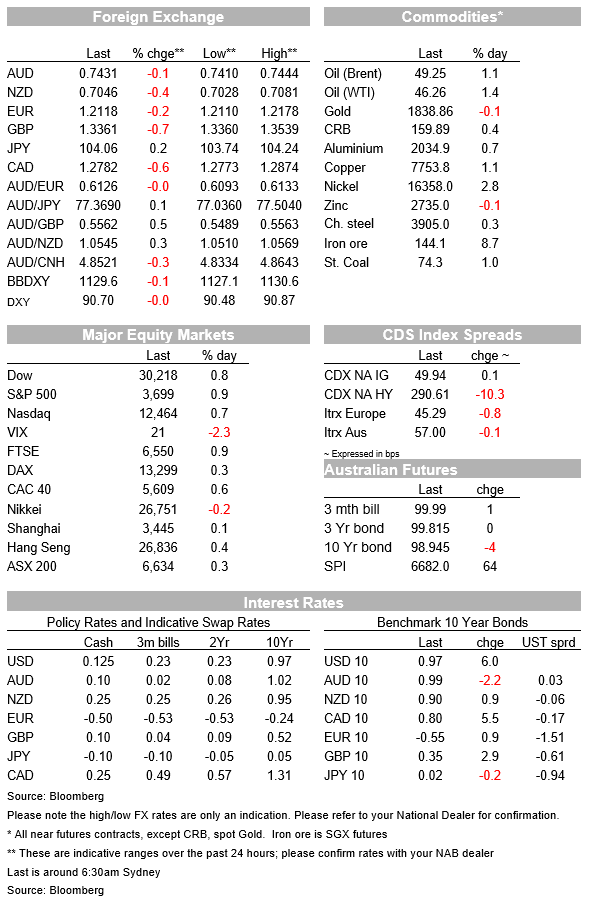