Biden announces range of sanctions on Russia, but not including SWIFT.

Politicians and markets already seem resigned to Russia taking control of the Ukraine capital Kyiv (they already have control of Chernobyl just to the north) and presumably instituting a regime change even if it is the case, as President Putin claims, that Russia doesn’t plan to ‘occupy’ its neighbour. US stock markets have mounted an impressive recovery off the opening crunch lower, the S&P 500 and NASDAQ are both in positive territory with half an hour of NYSE trade to go (NASDAQ +2.4%).

Assisting the recovery has been the news from President Biden than the wide ranging sanctions just announced, covering Russian banks and elites,  technology exports, etc., do not include excluding Russia from SWIFT global payments system . Biden does though says that Russia will not have access to ‘dollar’, euros, pounds or yen’ from a sovereign debt perspective. Here, to note is that it is European banks which have the largest exposure to Russian sovereign debt (the BIS estimates some $25bn each for Italy and France and $17.5bn for Austria, versus $14.7bn for the United States). Little wonder then that it was the financial sector that was worse hit (-5.8%) within the 3.6% overall decline in the Eurostoxx 50 index.

The biggest moves in markets during yesterday’s APAC session and overnight have been in commodities. Oil and gas prices have rocketed higher with spot Brent crude oil hitting $106 for the first time since 2014, but currently back just below $100 after President Biden announced his willingness to release further reserves as needed from the SPR.  European natural gas futures have exploded 36% higher (having been as much as 65% higher at one point); this after Germany earlier cancelled the Nord Stream 2 gas pipeline and European leaders are pledging to reduce their reliance on Russian oil and gas.  Other commodities have also been affected. Aluminium and nickel prices are by 2-3%, with Russia being a major producer of both metals, while wheat and corn futures are both up sharply  on the back of potential disruption to both Russian and Ukrainian supply.

Bond markets have  in most cases undergone bullish steeping, with obvious flight to safety into US Treasuries but where yields are currently well back from the intra-day lows (10s just 2bp lower  at 1.97% and 2s -5bps on the day at 1.56%). Earlier German bunds finished their day 6bps lower at 0.166%. Money markets have seen some  further paring back of central bank tightening expectations, but not by much. US Fed Funds futures now only ascribe about a 10% chance to the Fed moving by 50bps next month and have ‘only’ 6 25-point hikes priced over the course of 2022 from nearer  7 hikes at the end of last week. In Europe pricing for the ECB’s Deposit Rate by the end of this year has come in from about 35bps of tightening a week ago to 23bps now. In this respect ECB official Holzmann, seen as one of the more hawkish Governing Council members, said the situation in Ukraine could mean the ECB’s plans for normalising monetary policy “may now be somewhat delayed.”  In NZ, RBNZ Governor Orr has just been out reinforcing the hawkish messages from this week’s OCR decision and MPS.

In currency markets , while the USD is understandably enjoying a flight to safety bid (but much less so CHF and JPY which are both lower against the USD) the DXY index is still within what we identify as  abroad 94-09 range (high of 97.73 overnight, a new local high, but down to 97.0 now). AUD/USD has made a low of 0.7095, risk-sentiment finally overriding the impact of higher commodity prices and which has been helping AUD hold up last week and earlier this, but at 0.7165 it is almost bang in the middle of the 0.6968 – 0.7314 year to date range. 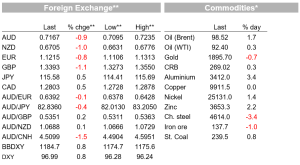 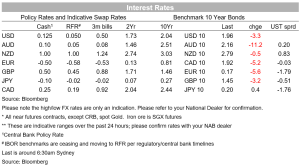