Markets Today: Hiking away from the fighting

Overview Ready or Not

Ready or not, here I come, you can’t hide
Gonna find you and make you want me – Fugees

Risk assets are back in favour following reassuring remarks from Fed Chair Powell. Rate hikes is the medicine the US economy needs to promote a long expansion. Fed Chair Powell is in favour of a 25bps hike this month but warns a more aggressive approach may be needed if inflation pressures don’t abate. US equity markets loved Powell’s reassuring remarks with the S&P 500 now trading above 2% while the VIX index has eased back towards 30. Meanwhile the Russia Ukraine war rages on, further roiling commodity prices with record moves in coal, oil, gas wheat and aluminon. The risk positive and uber hot commodity backdrop sees commodity linked currencies outperform with CAD at the top of the leader board after the BoC begins a new tightening cycle. AUD now trades above 73c and NZD is testing 68c. Core bond yields have been sold across the board, real rates have led the move in the US while breakevens are the culprits in Europe.

Speaking before the House Financial Services Committee, Fed Chair Powell said that he supported a 25bps hikes this month, but warned that if inflationary pressures remain elevated he was prepared to be more aggressive, “by raising the federal funds rate by more than 25 basis points at a meeting or meetings.”

In his rationale for hiking, Powell noted that the US labour market is “extremely tight,” implying the Fed’s maximum employment target has been met and now the Fed objective is to “promote a long expansion, and that is only possible in an environment of price stability,”. Commenting on the Ukraine invasion, the Fed Chair noted that the war, sanctions and ‘events to come, remain highly uncertain.” and together they imply that US economy could react in “unexpected ways”, thus the Fed needs to be “nimble in responding to incoming data and the evolving outlook.”.

As for the balance sheet reduction, Powell reiterated the view that once rate increases start, trimming assets “will proceed in a predictable manner primarily through adjustments to reinvestment,”.

Speaking at separate events, Fed Bullard repeated his call for “rapid withdrawal of policy accommodation” while Fed Evans was more cautious, saying that although monetary policy is “wrong-footed” and needs to be moved toward neutrality, he isn’t expecting increases exceeding 25 basis points apiece.

After a period of elevated uncertainty triggered by geopolitical tensions, US equity markets reacted positively to Powell’s reassuring remarks. The S&P 500 now trades up over 2% with all major sectors in the green. Energy and Financials have led the surge, currently up around 2.77% with communications and utilities lagging the move up around 1%. The NASDAQ is up 1.59% as I type while the Dow is 1.90%. Earlier in the session, European equities also closed higher with the Euro Stoxx 600 index +0.90%.

Meanwhile the Russia Ukraine war rages on with headlines reporting Russia advancement in the south of Ukraine while resistance in Kyiv remains staunch. The Ukrainian confirm a delegation is planning to attend talks with Russia in Belarus on Thursday but hopes of a truce remain low.

Russia’s Ukraine invasion and sanctions continue to roil commodity markets which were already tight given the increase in demand from a reopening global economy and low inventories. Aluminium set a fresh record of $3,590.50 a ton on the LME and nickel climbed as much as 5.6% with oil prices recording similar gains. Brent now trades at $113 while WTI is at $110 . OPEC+ agreed to stick to a gradual output increase of 400,000 b/d in April, as expected. In the U.S., crude inventories dropped last week, with imports from Russia falling to zero. All that being said, thermal coal takes the price for the most impressive move on the day, Coal futures for next year rose as much as 51% to $288 per ton on Intercontinental Exchange Inc while the Newcastle contract gained 28% to $400.

The risk positive and uber hot commodity backdrop sees commodity linked currencies outperform with CAD at the top of the leader board after the BoC started a new tightening cycle. The BoC hiked 25bps to 0.5% as expected by most with the Bank saying it expects to a series of hikes in order to arrest elevated inflation pressures. This was the first BoC hike since 2018 and the market is now bracing for the Bank to lift the cash rate rather quickly with the OIS market pricing a cash rate of 1.668% by the end of the year, that is a 132bps or just over five 25bps hikes by December. The loonie is up 0,75% on the day and now trades at 1.2648.

AUD now trades above 73c and NZD is testing 68c benefiting from both decline in risk aversion evident in equity markets as well as the rise in commodity prices. The AUD traded to an intraday high of 0.7307, 7bps from its YTD high. From a technical perspective, a break above the ytd high will have many targeting levels back above the 75c. For now, commodity gains are trumping the AUD and NZD’s sensitivity to market volatility.

In contrast EU currencies remain under pressure buffeted by concern over Europe’s energy dependency with Russia. Overnight the EUR made a fresh 18-month low of 1.1064, but now has recovered somewhat to trade at 1.1125.

In Europe, core inflation again surprised to the upside, coming in at 2.7% y/y, above the ECB’s 2% target.  Headline inflation hit a new high of 5.8% y/y and, given recent moves in oil and gas prices, is likely to rise further in the coming months.  Meanwhile the German unemployment rate fell to 5%, matching its pre-Covid level and indicative of a tight labour market.

Finally, ahead of payrolls on Friday, the US ADP employment survey showed 475k new jobs created in February.  The survey hasn’t had a good track record in predicting nonfarm payrolls in recent months and the market reaction was limited.  The market is looking for Frida night’s payrolls report to show a 410k job gain. 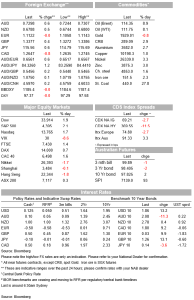