On #TheMorningCall today @NAB’s Rodrigo Catril on the impact of trade war rhetoric and the fallout from Syria. Plus softer payrolls from the US on Friday.

After the APAC headlines noting President Trump’s instructions to look for an extra $100bn in China trade tariffs, Trump’s tweets Friday evening added more fuel to the fire. A soft payrolls report didn’t help sentiment and shortly after China’s response that it was ready to make a “fierce counter strike”, accelerated the selloff in US equities and buying of US Treasuries. The USD traded lower with CAD, NZD the underperformers and GBP the big winner (AUD was a bystander). US officials’ attempts to calm markets came to no avail and Fed Chari Powell’s speech didn’t have any surprises.

While an outright US-China trade war is not on the cards yet the war of words is definitely on and it is likely to keep markets on edge over the coming weeks and potentially months. Officially the process of tariffs impositions includes public hearings (on 15 May) followed by an opportunity for rebuttal comments (22 May) before The Office of the United States Trade Representative (USTR) reviews all comments ahead of a final decision. Then a 60 day period noticed period follows and assuming no amicable deal is achieved behind doors, then the earliest tariffs could be imposed is somewhere around late July/early August. The US-China war of words has only just begun.

So after news that President Trump had instructed USTR to look into an additional $1000bn in China trade tariffs, Chinese Ministry of Commerce spokesman Gao Feng said that “If the U.S. announces tariffs on $100 billion of imports, we will have no hesitation and fight back hard immediately; and we don’t rule out any option.”. Key Trump advisors tried to allay investors’ fears, but with no success. Indeed Treasury Secretary Mnuchin made things worst acknowledging that “there is the potential of a trade war.”  In a  Sunday interview, Mnuchin tried to back away from that comment saying “but I don’t expect it at all” in reference to the potential for a trade war. President Trump also tweeted overnight (again), saying that “China will take down its trade barriers because it is the right thing to do. Taxes will become reciprocal and a deal will be made on intellectual property. Great future for both countries!”

Trade tensions were the main theme on Friday, overshadowing the US labour market report. Non-farm payrolls were weaker than expected at +103K in Mar (+185K consensus), however, gains still averaged 202K in Q1, up from 182K in 2017. The unemployment rate held at 4.1% and hourly earnings were +0.3% m/m, matching the consensus and taking the yoy to 2.7% from 2.6%.

US equities ended Friday sharply lower (S&P500 -2.19%, NASDAQ -2.28% and DJ -2.34%) and the sell-off was broadly based in nature with all 11 sectors of the S&P500 ending in the red. Early in the session European and Asian equity indices closed with modest declines, suggesting both markets are likely to open under pressure on Monday. News of a chemical attack in Syria over the weekend is also likely to weigh on sentiment at the start of the week. President Trump has lashed out at Syrian President Assad and his allies Russia and Iran saying there will be a “big price to pay”.

The USD underperformed in index terms with both BBDXY and DXY down 0.22% and 0.39% respectively. The risk off mode saw the JPY (0.43%), CHF (0.46%) and EUR (0.33%) outperform, but somewhat surprisingly given the soft data releases in recent days, GBP was the outperformer, up 0.64% with cable closing the week at 1.4092. The market appears to have dismissed the soft UK data releases as temporary (weather related) with GBP also one of the outperformers on the week.

In contrast CAD (-0.25%) was the underperformer on Friday despite better than expected labour market data (32.3k against expectations of +20k). The sharp decline in oil price amid trade tensions appears to have been the offsetting force. Still, on the week CAD was the outstanding outperformer, up 0.91%. NZD also underperformed (-0.19%), but after reaching a low of 0.7243 shortly after the US labour data release, against the decline in risk sentiment, NZD rallied to close the week at 0.7271.

Meanwhile AUD was essentially a bystander, ending the day little changed. AUD now trades at 0.7682. If more of the same is to be expected in terms of trade tension, NZD and AUD are likely to stay confined to their recent ranges (NZD 0.7154-0.7355 and AUD 0.764-0.7785) and with the AUD caught in the US-China crosshairs, NZD probably has more upside.

In his first speech as Fed Chair, Jay Powell said “The absence of a sharper acceleration in wages suggests that the labor market is not excessively tight,”  and also noted that participation among of those aged 25-54 was still not back to its pre-recession levels. In the Q&A Powell said that it was “really too early” to estimate how tariffs will impact the economy.

The ECB’s Coeure had more to say on the issue of trade wars, indicating that its risk increases the burden on central banks by dimming global growth prospects.  Protectionist sentiment has already “contributed to tighter financial conditions”, he said.  He later said in a CNBC interview that the ECB can for now look past the market impact of the trade spat as “it all comes against the backdrop of a very strong growth momentum.”  He noted that the ECB had seen “some uptick” in recent inflation numbers and that ECB rate guidance will gain in importance. 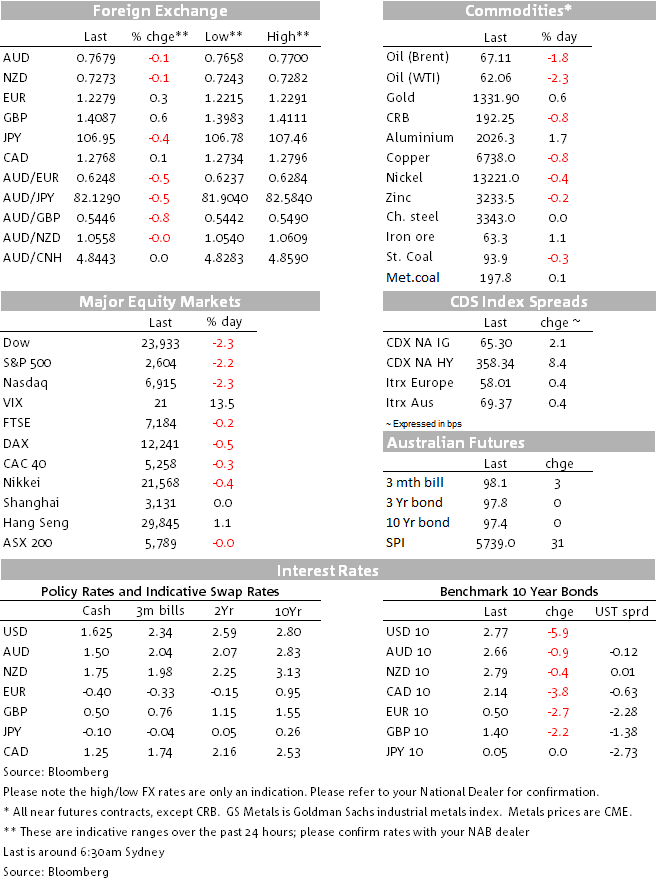