Risk sentiment failed to bounce convincingly overnight with US equities only eking out small gains in what was a volatile session. The S&P500 rose 0.3%, having traded in a wide -0.9 to +1.3% range, and is still down -2.2% on week. The continued lack of progress on passing another US stimulus package is becoming a more prominent concern amid signs of stalling in the US labour market. The latest signal overnight was Jobless Claims which missed expectations (870k v 840 expected). Economists are now starting to factor in the lack of fiscal stimulus into their forecasts with Goldman’s the latest to cut their US Q4 growth forecast to 3% annualised from 6%. The chances of passing another stimulus package appear to be dimming given the supreme court nomination is taking away much needed oxygen, while the Democrats latest proposal of a $2.4tn plan is still well above where Republicans want to land. A disputed election is also becoming more likely given Trump’s comments yesterday about refusing to commit to a peaceful transfer of power if he lost the election. Meanwhile the virus resurgence in Europe also has the potential to also stall the recovery seen to date. On the positive side, phase-3 vaccine results are due to roll in over coming weeks which would be a game changer for the outlook. Markets accordingly are likely to remain volatile.

G10 FX has also become more volatile in recent days, reflecting the increased uncertainty. The USD (DXY) though was little changed on net at +0.0% with some stability emerging in EUR (-0.1% to 1.1672) , GBP (-0.1% to 1.2749)  and USD/Yen (-0.0% to 105.40). The most immediate factor for that stability appears to be the policy divergence at play whereby Europe appears to be willing to undertake further stimulus, while the US is unwilling/unable to agree. In the UK Chancellor Sunak unveiled a mini stimulus plan that included a six-month job support scheme for part-time workers, support for the self-employed, extended and more flexible loans for businesses and a reduction in VAT to 5% for the hospitality and tourism sectors. Meanwhile in the Europe Eurozone banks have taken up €174.5bn in cheap three-year funding at the ECB’s latest TLTRO, suggestive of monetary stimulus finding its mark given it was at the high end of expectations, though well down from the record €1.3tn at the last operation three months ago. It is possible that Europe’s fragmented political makeup could allow for a greater immediate continuation/pick-up of stimulus (at least in the short term), whereas the US’ federal structure requires approval by what is an increasingly partisan Congress.

Reflecting the weaker outlook, G10 FX growth proxies fell with the AUD hitting a low of 0.7016 and although recovering to 0.7052, is still down -0.7% over the past 24 hours. The moves in the AUD are being seen in other key global growth proxies including in the SEK (USD/SEK +1.0%) and NOK (USD/NOK +0.4%). The Norges Bank also met overnight, with rates unchanged. While expected, there was some filling that the guidance on rates could be moved towards tightening in 2021 given the milder recession. That was not the case with the rates track showing the Norges Bank on hold in 2021.

In contrast to FX, yields were little moved. US 10 year was -0.7bps to 0.67%. Delving deeper, there has been a substantial paring back of the reflation trade over recent weeks with US 10yr breakevens testing August lows at 1.58% and were down -1.2bps overnight.

On the economic front, US jobless claims  showed little change last week against expectations for a modest improvement (870k v 840 expected and 866k previously). The very high level of claims still being printed points to a very weak labour market. One area of strength in the US economy remains the housing sector with new home sales surging in August (+4.8% m/m v -1.2% expected). One Fed member not buying the stalling growth story is St Louis Fed President Bullard, who thinks the US economy may be close to a complete recovery by year-end. Chair Powell meanwhile reiterated his comments in a second day of testimony in front of lawmakers, urging more fiscal support, saying that households risk running out of money with no further stimulus action.

A quiet day domestically with only a prelim read of merchandise trade for August. Looking to the weekend, some relief is in store for Victoria with Premier Andrews likely to ease lockdown restrictions on September 28 given the 14-day moving average for Metro Melbourne at 26.7 has moved below the 30-50 benchmark required for easing of restrictions. Also be watchful for a revised re-opening schedule given the sharper than expected fall in virus numbers – the AFR notes Victoria only recorded 5 new virus cases yesterday, which was the third single-digit day of reported cases this week when accounting for reclassifications (see AFR for details). Offshore it is quiet with only US durable/capital orders and the Fed’s Williams of note. Further details on what’s coming up is below” 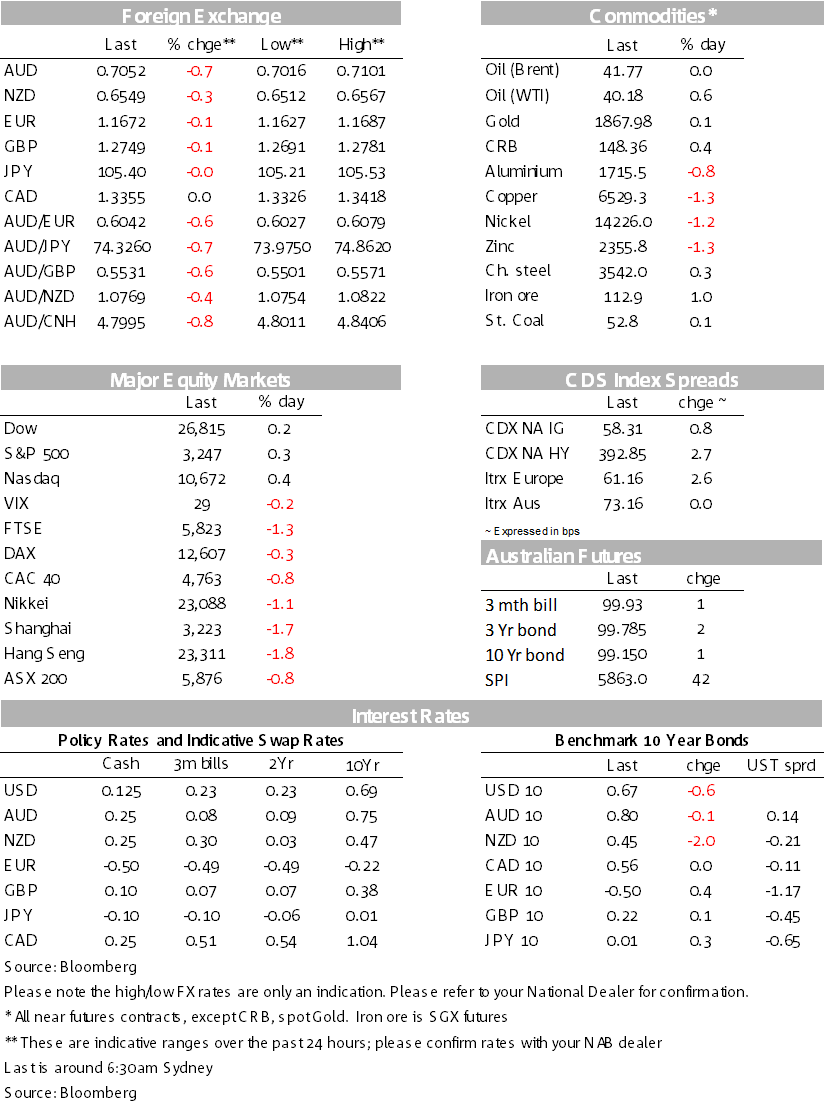