Overview:  I knew you were trouble

“Cause I knew you were trouble when you walked in”, Taylor Swift 2012

COVID-19 continues to stalk global markets with downside surprises for both US Payrolls and European Services PMIs. Despite that, market reaction was measured with a sharp economic deterioration largely having been flagged by more high frequency data such as Jobless Claims. Latest high- frequency analysis by WSJ/Moody’s suggests US activity has now fallen by some 29% (see WSJ link). US 10 year yield were flat (-0.2 bps to 0.59%), while equities were moderately in the red (S&P500 -1.5%). The USD continues its ascendancy in line with the dollar smile thesis with DXY +0.6% on Friday and is up 2.4% over the week. One of the biggest G10 FX movers was GBP, down some -1.3% to 1.2238 and opens trade on the backfoot with reports of PM Johnson taken to hospital with persistent COVID-19 symptoms (he tested positive 10 days ago). The AUD (-0.6%) fell in line with USD strength, though has edged slightly higher this morning to 0.6015.

Despite the negative headlines

Risk sentiment appears to be stabilising with USD/Yen +0.4% to 108.42, while the VIX is back down to 41, after having been as high as 82 in mid-March. Some of that stabilisation no doubt helped by the oil price, where oil prices continued to climb (Brent +13.9% to $34.11) with hopes high ahead of the OPEC+ meeting on Thursday. Weekend reports suggests more optimism on a deal with Norway and Canada’s Alberta expressing willingness to cut production, while Iraq’s oil minister said he was optimistic about a deal. COVID-19 also appears to be reaching a peak in Europe with Italy seeing the number of patients in intensive care falling for the second consecutive day. Note Italy imposed a countrywide lockdown on March 9, and so is supportive of the view that the virus peaks and peters out after 15-30 days following a strict lockdown. Focus in markets will now turn to the path out of lockdown and to what extent containment measures can be lifted without risking a second wave of infections (more on that below).

First to US Payrolls

March Payrolls were much worse than expected at -701k against the -100k consensus with downward revisions to prior months of -57k to boot. Unemployment jumped to 4.4% from 3.5% (consensus 3.8%). True unemployment was likely even worse with the BLS also noting the “true” unemployment rate was one percentage point higher than published due to a misclassification of workers, while the participation rate also helped temper the rise with participation falling 0.7 percentage points to 62.7%. While a shocking result, April numbers will be dramatically worse given Jobless Claims have risen 10m over the past two weeks and the consensus is for another 5m this week. As such April Payrolls could fall between 15-20m! and drive the unemployment rate up to the mid-teens. Reinforcing the contraction in economic activity, analysis by the WSJ/Moody’s on high frequency data suggest there has been a 29% drop in activity (see WSJ link).

Global Services PMIs were largely weaker than expected as well with Eurozone services activity contracting to 26.4 from 52.6 against a consensus of 28.2. Readings for Spain (26.7) and Italy (17.4) were woeful. Weak European Services PMI initially helped lift the USD, and later in the session the US Non-manufacturing ISM bucked the trend, coming in better than expected because of a rise in supplier deliveries. The US Non-manufacturing ISM was 52.5, against the 43.0 consensus. China’s Caixin Services PMI was also better than expected at 43.0 against 39.0 expected. Though while beating expectations, the rise was less than the whisper number given official measures earlier last week.

China continues to massage down expectations for the economy

Over recent days a number of press articles have emerged quoting officials downplaying a strong rebound in activity. The latest was a China State Council official who predicted a 10% decline in Q1 GDP and that 2020 growth was likely to be 3.5%. Significantly he also noted COVID-19 impacts could be long lasting. Key to a strong rebound in China will be the ongoing lifting of containment measures with Wuhan – the epicentre of the outbreak – set to lift containment measures on April 8. Fears of a second wave of infections though has seen some degree of social distancing measures remain in place and last week it emerged Wuhan residents are still being urged to stay indoors to avoid a resurgence in infections despite the imminent lifting of containment measures. Markets will be watching closely to see to what extent containment measures can be lifted, without risking a second round of infections.

Finally, across the Ditch

The RBNZ announced that it would increase it pace of government bond purchases, targeting $1.8b in the week ahead, up from $1.35b last week and $0.75b in the first week of QE. This comes ahead of the syndicated tap of the 2031 bond this week. On Friday, both Governor Orr and Assistant Governor Hawkesby spoke to the media, signalling that the RBNZ is prepared to upsize and expand the scope of its QE programme.

The week starts with a whimper with no top-tier data scheduled today in an Easter shortened week. The week though does have a few important events. Domestically all eyes will be on ANZ Job Ads on Tuesday for the first hard signs of COVID-19 impacting the labour market. The RBA also meets Tuesday, but is unlikely to add much having only recently eased – a discussion of their recent measures is likely.

The two most important events will be the OPEC+ meeting that has been tentatively scheduled for Thursday given the sharp rally in the oil price on production cut hopes, as well as whether China goes ahead and lifts containment measures on the city of Wuhan – the epicentre of the COVID-19 outbreak. Also out in the week is the FOMC Minutes (Wednesday) and ECB Minutes (Thursday). EU finance ministers also meet to hash out spending plans. The week though will end early on Thursday with markets expected to close early ahead of Good Friday (SIFMA in the US is urging markets to close at 2.00pm). Data though will keep coming with US CPI and Chinese CPI due on Friday. 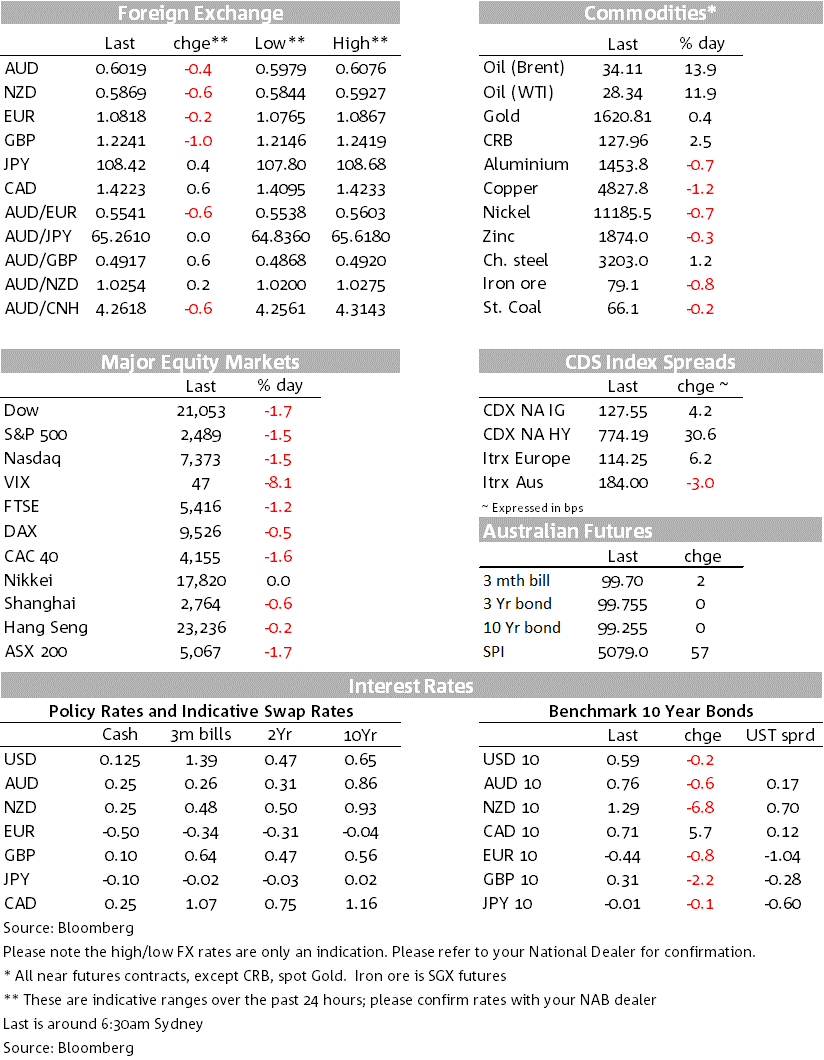