The Australian dollar – and emerging markets more broadly – were hit by further concerns over the spread of the coronavirus.

Overview: Cover me up

Cover me, come on baby, cover me – Cover Me Up Bruce Springsteen

The cold, then hot pattern in equity markets evident since the start of the Coronavirus scare, took a very cold turn on Friday with sharp declines in US and European equity markets amid concerns over the impact from the virus outbreak on the global economy. Core global bonds rallied with short dated UST yields leading the decline. GBP was again the big G10 outperformer with the UK officially leaving the EU at month end. c but outperformed EM and growth sensitive currencies such as the AUD and NZD. Both Antipodean currencies ended January close to their month lows at 0.6691 and 0.6467 respectively.

Concerns over the 2019-nCov outbreak heightened on Friday night as China and other countries increased their actions to contain the spread of the disease. While the relative low death rate of this new virus (just above2% currently) compare to SARS (~10%) has been used by many as a measure to appease concerns over its potential economic impact, the current speed of contagion along with the drastic containment measures are forcing a reassessment over its likely negative impact on the global economy.

Sadly, the human impact from the disease continues to rise as the number of infected accelerates and the death toll increases. China recorded 2,590 new cases for February 1st, and 45 deaths. Total infections are now over 14600 with 305 deaths including the Philippines recording the first death out of China. Australia and other countries have joined the US in restricting travel to and from China to contain the spread of the disease. China has also introduced widespread travel restrictions while factories have closed and export orders have bene cancelled. Evidence that the speed of contagion is decelerating would a positive as it would signal that the containment measures introduced thus far are starting to have an effect. Unfortunately, we are not there yet, but once we have confirmation of a deceleration, then more credible estimates can be made on the overall impact to economic activity and the eventual prospect for a rebound. In the meantime, taking cover looks like a wise strategy.

The virus outbreak uncertainty and its impact on economic activity has resulted in a big pullback in risk appetite with sharp falls in equity markets, commodities and rates. The S&P 500 Index erased its 2020 gains (down 1.77% on the day and  -0.16% ytd) while the VIX Index (a measure of US eq market volatility) spiked to an almost four-month high (18.84). Caterpillar shares took a hit as its outlook trailed estimates while a solid report from Amazon cushioned the decline in the NASDAQ to “just “ 1.59%. European share also had a bad day with all major regional indices down between 1.0% to 1.4% while the STX Europ 600 closed at -1.07%.

With risk aversion on the rise, data releases took a back seat. The flash Euro area Q4 GDP report was soft, with real GDP up just 0.4%q/q, saar, the weakest reading since the last quarter of recession in 2013 Q1. The Q4 report was something of a mix of “unders” (France, Italy) and “overs” (Spain), with Germany’s growth seemingly not worsening judged by the full 2019 estimates released a fortnight ago. In addition to the impact from Coronavirus, the forthcoming EU-US trade negotiations suggest a choppy period ahead for the EZ economy.

The US 10-year Treasury yield also steadily fell during Friday’s overnight session, ending the day near its low, down 8bps to 1.51%. The 2-year rate fell by a greater 10bps to 1.31%, consistent with expectations that the Fed will need to cut rates, with some 50bps of easing now priced this year. Fed vice-chair Clarida called the coronavirus a “wild card” and it was too early to determine whether it will significantly affect the US economy.  He argued that if the virus were to result in a one-two quarter slowdown in growth that’s “probably not something that changes the big picture”.

US data was also largely ignored, but for the record the Chicago PMI plunged to a four-year low, defying market expectations for a small increase. The fall defied the rise seen in other regional indicators, being likely depressed by Boeing’s woes with the 737-Max. On a more positive note, the final reading of the University of Michigan’s consumer sentiment index edged up to an 8-month high, suggesting a resilient US consumer, buoyed by strong income growth. On the inflation side, the core PCE deflator ticked up to 1.6% y/y, still below the Fed’s 2% target. Annual inflation in the employment cost index was 2.7%, continuing at a fairly steady, unthreatening pace, over the past twelve months.

The USD still managed to outperform  EM and growth sensitive currencies. Unsurprisingly the AUD and NZD were the G10 underperformers on Friday, down 0.45% and 0.37% respectively. The AUD traded to a low of 0.6683 early in the overnight session, closing January at 0.6692. After trading to a high of 0.7032 on the last day of 2019, the AUD has been on a steady decline with the move accelerating over the past two weeks, the pair closed the month 4.69% lower and with the Coronavirus uncertainty still unresolved, the AUD it still facing more downside risk near term.

NZD/USD ended Friday down 0.4% for the NY session to 0.6465, taking its monthly decline to just over 4%, almost fully eroding the sharp recovery seen through December. With the 100-day and 200-day moving averages breached, the next line of support is around 0.6400. 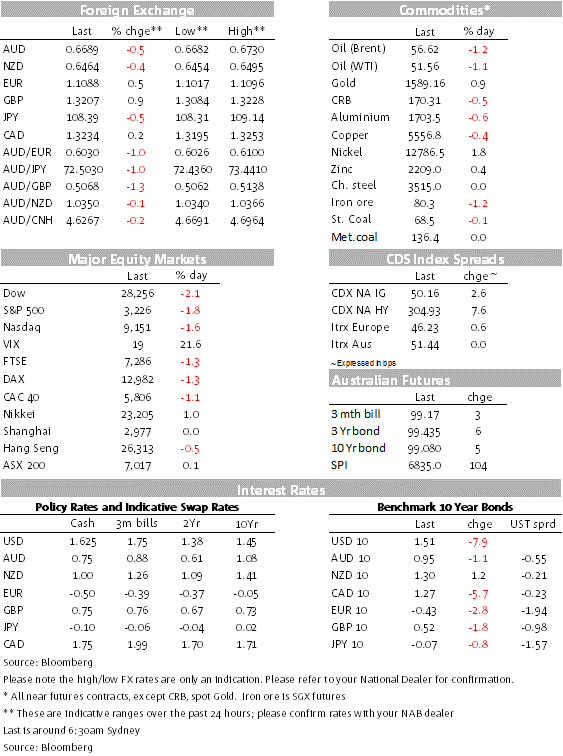 Australian Markets Weekly: The case for a rate cut in February