Overview: The hour of power

The power of love is a curious thing, make a one man weep, make another man sing
Change a hawk to a little white dove, more than a feeling, that’s the power of love ……. Huey Lewis & the News

A dose of reflation hopes seems to have lifted investors’ spirits into a last hour of power in the US equities market on Friday. The US vaccination rollout has been proceeding well. As of Saturday, 140m doses had been administered, some 42% of the population. That’s on track to meet President Biden’s announcement Friday to double his vaccination rollout target in the first 100 day from 100m to 200m. And for banks, there was also the tailwind from the late Thursday Fed announcement (released after the market closed) to free most US banks from dividend and buy-back restrictions after 30 June, after completion of the current round of stress tests and subject to adequate capital. An announcement is also expected this week from the President on his further $3tr stimulus plan while in Europe, the German Ifo was better than expected as were UK retail sales to some extent.

As for the Aussie specifically, the announcement on Friday from China imposing anti-dumping tariffs on Australian of between 116.2% and 218.4% for five years came and went for the AUD. Supporting the AUD was the further confirmation of Australia’s recovery from a $50bn improvement to the Budget’s bottom line, also aiding Australian bonds on Friday. Weekend residential auction results continued to power on, price gains ahead of last month’s rise.

What the market is most interested in is the big boost that will arrive in March and ensuing months from the $1,400 cheques, and other stimulus payments, further economy re-opening and the vaccine roll-out. The first estimate of March US Retail Sales is released 15 March.

An upward revision to the University of Michigan late month estimate of Consumer Sentiment was also beneficial, the final estimate revised up from 91.5 to 93.0, incorporating the first positive balance between those expecting good times and those expecting bad times for a year.  We also note that the medium to longer term estimate of surveyed consumer inflationary expectation (5-10 years) was nudged higher to 2.8%, something the Fed will be content to see, to the highest level since 2015.

Across the Atlantic, Germany’s Ifo Survey for March told a similar upbeat story to last week’s March PMIs that were better than expected, both for the Manufacturing and the Non-manufacturing sectors.  The headline Business Climate Index came in at 96.6, clinically back to pre-pandemic levels of February last year, benefitting from an improvement in expectations and the survey’s current assessment component.

Unfortunately, while it’s likely that businesses have been finding ways to manage through the current lockdown, and with the Chancellor last week ditching the proposed hard lockdown over Easter, another lockdown of sorts is on the cards, something the French President is also giving thoughts to. Angela Merkel’s chief of staff, Helge Braun, warned over the weekend that the country still finds itself “in the most dangerous phase of the pandemic.”

Braun called for the imposition of stricter measures and night-time curfews in regions with high numbers of new infections. He spoke out in favour of additional curbs in regions where the number of cases per 100,000 people in the last seven days is more than 100. “That’s where regional curfews in the evening and at night can help, because we have the highest infection rates at meetings in people’s homes.”

It’s going to be interesting to see how the EUR performs at the first part of the week in the wake of this news. The EUR closed at 1.1794 on Friday, toward the lower end of its trading range last week in some contrast to sterling that made up some lost ground toward the end of last week, closing at 1.3789.

While Europe’s vaccination rollout is lagging, the UK program has been continuing apace. Just under half the population has now had their first jab. Culture Minister Oliver Dowden said on the BBC’s Andrew Marr show on Sunday that the Moderna vaccine is being rolled out in April.  Dowden confirmed the government is aiming to offer immunisation to all over-50s by the middle of April and all adults by July despite some delays in the delivery of the Oxford/Astra Zeneca vaccine from Serum Institute of India and ructions with Europe over potential vaccine export curbs from the continent to the UK. While infection numbers are levelling out – in part from intensified testing of school students – deaths and hospitalisation numbers continue to fall.

First up in this Easter-shortened week for Australia is weekly payrolls for the week ended 13 March, out tomorrow. Labour market indicators will be potentially hot property for the local market in coming weeks and months as the economy traverses the end of JobKeeper.

Later in the week comes building approvals, trade, a later estimate of retail trade, all on Thursday, and job vacancies just ahead of JobKeeper ending.  All these releases are for February. It would be remiss of me not to mention the full March house prices report from CoreLogic, out Thursday too and set to see capital city prices rise around 2¾% over the month.

Offshore, China releases its official PMIs for March on Wednesday, both the manufacturing and non-manufacturing indexes to rise 0.6 index points. Friday’s non-farm payrolls are out on Friday and should reveal some quickening in the pace of new job creation alongside re-opening and the vaccine rollout. Payrolls growth is expected to be 643K, after February’s 379K, while the unemployment rate is expected to fall to 6.0% from 6.2%. The Eurozone release their March inflation report mid-week, preceded by tomorrow night’s Germany’s inflation.

The market will also be on the lookout this week for President Biden expected outline on his $3tr infrastructure-plus package, partially funded from tax rises, expected Wednesday in a visit to Pittsburgh. OPEC+ meets on Thursday to consider May output levels. Ever Given’s still stuck state blocking the Suez Canal also added a bit more to the inflation story and continuing supply chain disruptions. 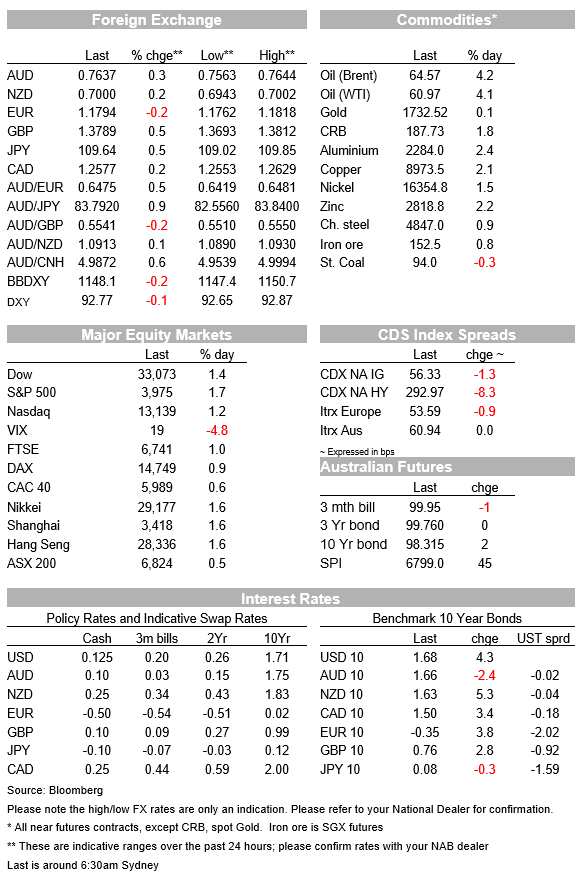