Still hope a Brexit deal can be found, fears of a US response to the death of a journalist in Saudi Arabia seem to have been put on hold, keeping oil prices in check. And a look ahead to today’s NZ inflation figures.

Local news has centred on the news of a new confinement in the Royal household, Harry and Meghan arriving yesterday.  Good luck to them.  Equities made some gains in Europe while it’s been a whippy session in the US, stocks out of and into positive territory, before closing down, led by tech.  In the FX space, in another rather subdued session, the USD has been losing some grip in a drifting market, most major currencies making some gains against the big dollar, led by the NZD and the AUD, the NZD up 0.65% since late yesterday to 0.655, the AUD +0.35% to 0.713, AUD/USD this morning trading around 1.09.

When Asia closed yesterday, the mini-accumulation of news seemed to set the scene for a risk-off session to start the week in the Northern Hemisphere.  As my BNZ colleague Jason Wong noted this morning, there was hard talk between the US and Saudi Arabia on the back of the mysterious disappearance of a Washington Post journalist inside the Saudi embassy in Turkey; there were reports of Brexit negotiations coming to a stalemate over the weekend ahead of this week’s EU summit; and Trump made a number of anti-China comments in a TV interview, reiterating his threats to impose more tariffs and arguing that China is meddling in US elections.  Against this backdrop S&P futures were negative and down by 0.8% near the close of Asia trading.

European equities did open weaker on the back of sizeable losses in Asia-Pacific equities, but managed to rally as the morning session progressed to close up for the day, the E600 European index up 0.1%, the FTSE by 0.48% and the DAX by 0.78%.  It’s been a choppier session in the US, with only Bank of America among the main names to release their results last night, headline EPS beating the consensus, but their stock closed down 1.9%.  The tech sector has been under-performing in the US, not surprising perhaps because of lofty valuations and tech-related US-China trade tensions.  The Nasdaq has closed down 0.88% and the FANG stocks down 1.14% in a weak close to proceedings,

The NZD has been leading the mini-charge against the USD ahead of the Q3 CPI this morning and a market that, according to the latest Chicago futures report, revealed spec positions at record shorts.  For the USD, US Retail Sales for September missed the market consensus, headline sales barely growing (+0.1% against the 0.6% consensus), but on further inspection it was evident that the main culprit was a 1.8% decline in food service establishment spending, quite possibly the dislocation from Hurricane Florence.  (More in October from Michael?)

The Atlanta Fed trimmed their Q3 GDPNow estimate from 4.2% to 4.0% on now-assumed 3.3% growth in consumer spending, down from their previous 3.6% estimate.  Still handy growth overall nevertheless, even if supported by tax cuts.  The USD took the numbers in its stride, dipping slightly on the release (as did bond yields) before stabilising.

Also released overnight was the September month and full-year Budget deficit figures for the US, the full-year 2018 FY deficit coming in at 779bn, up from 666bn for FY17 and the largest since 2012.  Receipts managed to eke out a 0.4% gain despite tax cuts, while outlays rose 3.2% as the fiscal boost plays through.

President Trump spoke with the Saudi King on a phone call, who strongly denied his government was behind the killing of the journalist.  This led Trump to suggest that it might have been “rogue killers” and he sent Secretary of State Pompeo to investigate further.  This has taken some heat out of oil prices, which opened higher, but have lost some grip since.  Whatever the truth on Kashoggi, oil prices have subsequently softened, well off intra-day highs.  Base metals eased, though gold rose. Bond yields have closed close to square. 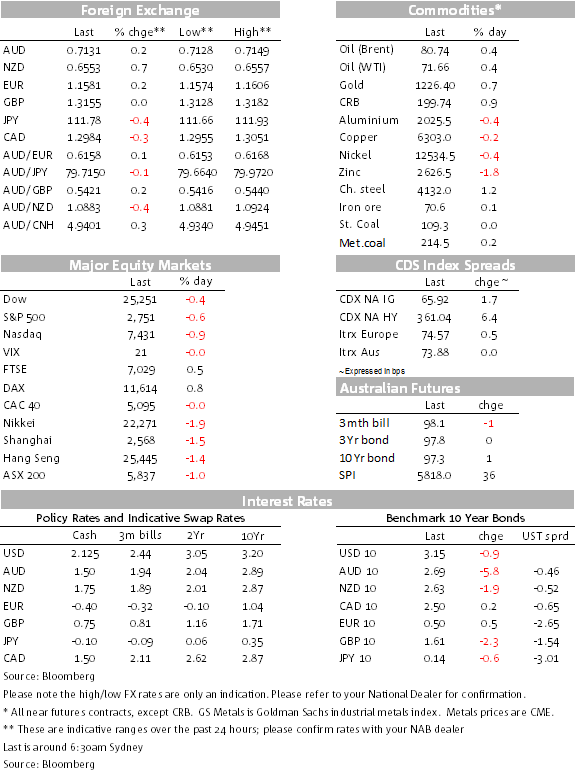