Overview: The Empire strikes back

I’m altering the deal. Pray I don’t alter it any further – Star Wars: The Empire Strikes Back

It has been a quiet start to the new week with equities on both side of the Atlantic eking out small gains while core global yields have drifted lower with longer dated tenors leading the way. The USD looks to be consolidating last week’s decline -GBP the notable underperformer while AUD and NZD have modestly extended yesterday’s post China data gains. After printing a record low decline in June, the NY Empire Manufacturing index is back in expansionary mode, but details in the survey were not as rosy.

Ahead of a busy weeks of earnings reports , US equities have begun the new week in a passive and cautious mood with the S&P 500 barely in positive territory while the NASDAQ is 0.17% higher. Defensive sectors such as utilities and consumer discretionary have outperformed (~0.35%) while financial and energy closed in negative territory (-0.53% and -0.93% respectively). The move lower in oil prices didn’t help the energy sector while the flattening of the UST curve likely weighted on financials. Overnight Citigroup reported its Q2 earnings with the US consumer helping offset slow trading and corporate activity. Net income rose 7%yoy, Q2 profit came at $4.8bn , compare to  $4.5bn from a year ago. EPS were $1.95 vs $1.81 expected by the market. Citi shares closed a tad lower at -0.08%, while other major banks were down between 0.9% and 1.37%. JP Morgan, Wells Fargo and Goldman Sachs report tonight.

The decline in core global bond yields have been led by 10y Bunds -4.1bps to 0.251% while the UST curve bull flattened as 30y UST decline by 3.7bps to 2.61%. The move lower in core yields probably reflect some concerns over the outlook for China after yesterday’s Q2 GDP and activity reading for June while the move lower in oil prices probably didn’t help longer dated tenors either. Although bang in line with market expectations China’s Q2 GDP growth of 6.2% yoy was the weakest since quarterly data began publishing in 1992. The market was more focused on the monthly investment, retail sales and industrial production indicators, which were all stronger than expected, perhaps a sign that stimulus measures are working their way through. Still, there’s an air of caution about China’s economy and the rest of Asia, as US import tariffs were only ramped up in May, becoming effective mid-way through June. This suggest more pain is likely ahead and therefore further easing in monetary and fiscal policy will be required, a positive offsetting force for domestic demand ( a good story for AUD and NZD) while the China’s external sector is likely to remain under pressure (not a good story for Germany).

The NY Empire state survey was the US data highlight and as expected the main index return to expansionary mode (4.3 vs. 2.0 exp.) after its record decline in May. The index’s increase reversed the prior month’s record 26 point drop that had sparked concerns about a sudden contraction NY state business activity. That said details in the report were mixed with the new orders index coming at  -1.5 from -12 while the employment sub-index fell deeper into negative territory to -9.6.

Looking at currencies the USD looks to be consolidated the declines recorded last week with USD indices showing small gains over the past 24hrs, largely reflecting GBP weakness. Cable is down 0.44% and now trades at 1.2516. There has not been any major UK data release or Brexit news, but as we start the second half of July, the market looks to be preparing for a new PM with a strong Brexit agenda. Boris Johnson remains the probable winner in the Conservative leadership contest and his likely agenda at least initially is to go hard and see if he can get a better deal with the threat of a hard Brexit as his main bargaining chip. GBP is set to struggle in this environment.

Meanwhile as mentioned above, the positive China activity readings, boosting its domestic demand, has been good news for the AUD and NZD. The AUD now trades at 0.7039, up  0.3% over the past 24hrs while NZD is 0.37% higher at 0.6719. 0.7050 remains the big test for the AUD, a break above that level technically opens a fair bit of free air for the pair to make a move above 71c, US retails sales and US earning reporting is the imminent market focus while AU labour market data on Thursday is the domestic event to watch.

Looking at commodities, yesterday iron ore had a good day, gaining 0.78% to $121.2 probably boosted by the details in China’s activity readings which included a 10% jump in crude steel production. Oil prices on the other hand lost between -1.5% and 0.8% following news that hurricane Barry has now move ashore and is weakening allowing drillers restaffing offshore installations in the Gulf of Mexico.

Our BNZ colleagues anticipate a 0.5% increase in the Q2 CPI, partly as fuel prices rebound from their drop in the prior quarter, which would nudge annual inflation up from 1.5% to 1.6%.The market and RBNZ both expect a 0.6% rise, with annual inflation at 1.7%. Meanwhile annual core inflation is likely to remain around or just below the 2% mark in Q2. We don’t see the data getting in the way of a likely RBNZ rate cut of 25bps next month, which is currently well priced at 21bps.

In July the RBA lower the cash for a second consecutive months to a record low level of 1%. Focus on the Minutes from a market’s perspective is likely to be on the rationale for lowering the cash rate and on any colour re the conditionality for further easing. The minuets are likely echo Governor Lowe’s recent remarks that the outlook remains “reasonable” with further easing depending on the data. Based on the RBA’s May SoMP, NAB thinks the Bank’s outlook for the labour market, economic growth and inflation remain on the optimistic side.

Lower gasoline prices suggest upside to the retail sales control measure. Market is at 0.3% vs 0.5% prior. 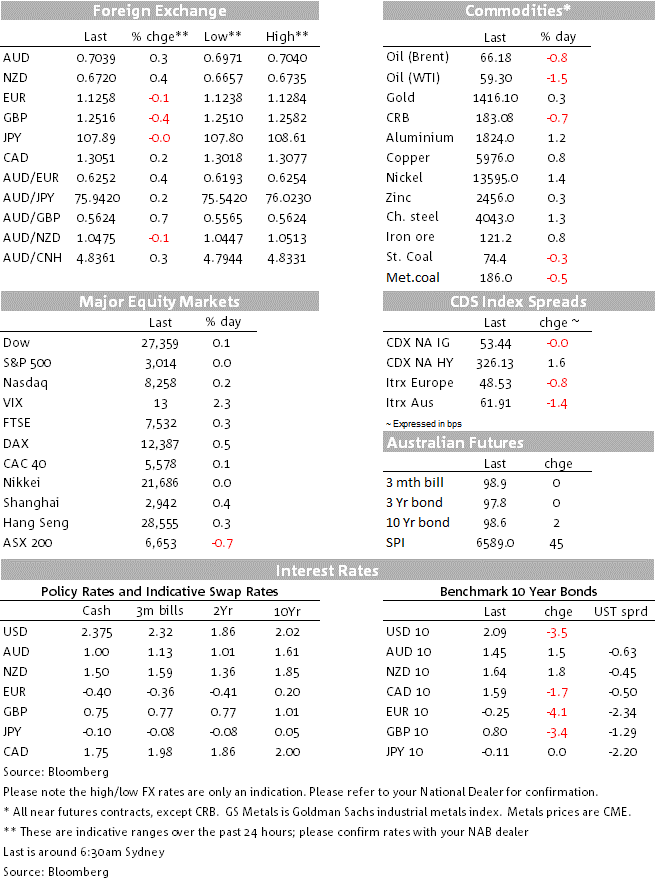