The Russian Rouble and the Turkish Lira hit hard over US sanctions.

Local markets yesterday were dominated by the drubbing meted out to the New Zealand dollar – accompanied by a fair amount of carnage in the NZ swaps market – in the wake of the RBNZ making clear that it does not expect to move rates before at least mid-2020. Offshore, pressure on the NZD has been compounded by acute weakness in several major Emerging Market currencies, notably TRY and RUB (also ZAR) and which is now bearing down on AUD while supporting the likes of CHF and JPY. US stock markets come into the NY close showing the first (small) sign of concern for a while at global developments, as too bonds where 10-year Treasuries are 2.5bps lower.

The Turkish Lira is closing in New York down almost 5% on the day, after latest diplomatic efforts by Turkey to lift sanctions on two government ministers – deemed by the US as responsible for the failure to release an American pastor detained by the Turkish authorities on accusations of being involved in a failed coup attempt – came to nothing.  The backdrop to endemic Lira weakness is of course the familiar one of an economy suffering rising inflation and a burgeoning balance of payments crisis alongside a central bank that has in effect been stripped of much of its independence since PM Erdogan was re-elected to power in June.

The Russian Rouble, Argentine Peso and South African Rand are all showing losses of between 1.5% and 2% (RUB because of the new sanctions imposed by the US over the nerve agent poisoning of an ex-Russian agent and his daughter in the UK earlier this year). Alongside which, the NZD is doing a very passable impression on an EM currency, as the third worse performing ‘expanded majors’ currency of the past 24 hours.

The significance of this for the AUD is that the JPM Emerging Market Currency index is off over 1% (-1.2% as a type) given the 8%+ weights afforded TRY, RUB and ZAR. The start of the fall in AUD/USD from above 0.78 back in April can be dated almost to the day to the start of the sell-off in global EM FX and which pre-dated the CNY-led fall in the Asia-only ADXY. This only really started coming under significant pressure in June.  AUD has proven itself to be the market’s preferred global, not just Asia EM, risk proxy. Hence a decent 0.7% drop in AUD/USD overnight, most of losses coming in the New York session and after AUD/USD was drawing support during our day yesterday from AUD/NZD demand in the aftermath of the RBNZ.

NZD loses, incidentally, were compounded just as we were heading for the door yesterday after RBNZ Assistant Governor John McDermott suggested the chances of a rate cut had increased (“we’ve been pushed nearer to that trigger point”) and that the Bank would need to see core inflation above 2% to hike.

Elsewhere among G10 currencies the EUR is faring badly, EUR/USD off 0.7% to its worse level since late June.  Last night’s ECB monthly bulletin warned that US tariffs are in danger of reaching their highest levels for half a century and expressed rising concern at the impact of Trump’s trade policy on Eurozone growth. It understandably noted particular concern at the prospect of Trump going ahead with tariffs on the auto sector (albeit currently on hold after the Trump-Juncker meeting last month) warning that given the complexity of auto-sector supply chains, this would particularly affect Canada, Japan, Mexico and South Korea as well as key economies in the EU.

GBP got a lift during the London session on an unsubstantiated newspaper report that European leaders are preparing to negotiate a deal that would let Britain remain in the single market for goods, while opting out of free movement of people. This would involve the EU abandoning one of its red lines and require concessions from the UK, reportedly on environmental, social and customs rules. No official UK or EU response thus far.

CHF and JPY top the G10 leader board, symptomatic though are both still fractionally softer against a stronger USD dollar that closes in New York with the DXY index above 95.50 and at its strongest since mid-July.

US equities were in positive territory for much of the New York session, but fell away quite sharply during the final ‘hour of power’ with the Dow finishing off 0.3% and the S&P 0.14%, energy and industrials leading the charge lower.  Earlier, European stocks closed narrowly mixed with the Eurostoxx 50 virtually unchanged.

Both WTI and Brent crude are about 0.4% lower, gas also down. Precious metals are flat while industrial metals are mixed (aluminium, nickel, lead weaker but copper, zinc stronger). 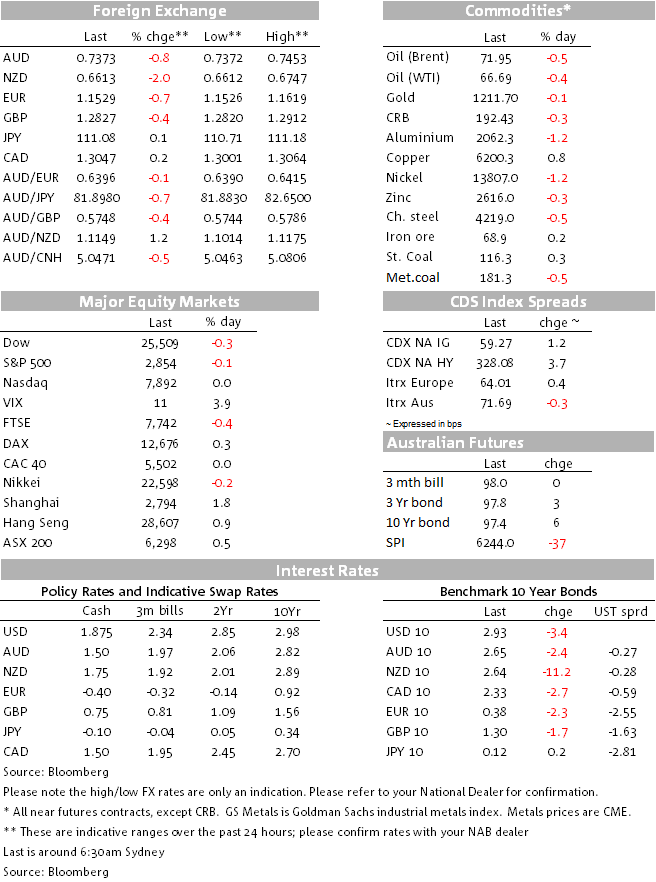