The jump in US annual average hourly earnings in January, to 2.9% from an upwards revised 2.7% in December, stole the limelight on Friday albeit there were a number of extenuating circumstances suggesting the number shouldn’t be taken completely at face value.

The jump in US annual average hourly earnings in January, to 2.9% from an upwards revised 2.7% in December, stole the limelight on Friday albeit there were a number of extenuating circumstances suggesting the number shouldn’t be taken completely at face value. Together with a 200k headline non-farm payrolls print (but with net negative revisions) and unchanged 4.1% unemployment rate, the data served to ratchet up 10 year Treasury yields, the latter freaking out stocks. The higher yields/risk negative tone propelled an across-the board extension of a nascent early-week USD recovery, led by more AUD weakness. AUD/USD ended the week 2.2% lower at 0.7931, half a percent more than any other G10 currency.

At 2.9%, US average annual earnings are now growing at their highest since June 2009. The jump in the y/y figure was mostly due to revisions, where the prior month’s y/y figure was upwardly revised by two tenths to 2.7% from 2.5% (there was also a base effect from the January 2017 level being revised down by 0.1%). Contributing to the recent rise is the recent minimum wage increased in 18 states and upward revisions to annual benchmarks. The weather may also have impacted via a fall in hours worked.  Average weekly hours were down in the month by 0.2 to 34.3, thereby possibly boosting average hourly earnings (it’s also the case that those not working because of the bad January weather will likely mostly have been lower wage earners, biasing up the average of those in work).

So all up, it’s a little premature to conclude that the upswing in earnings growth is quite as strong as the headline figure suggests. That said, resident FOMC dove Neel Kashkari opined after the figures that if wage growth continues, “it could have an effect on the path of interest rates”.  Kashkari was a voter last year, remember, and dissented against all three rate rises.  Dallas Fed president Bob Kaplan was also out Friday, saying he’s comfortable with three rate rises this year but that he sees risk of the need to do more, though this was not news (he said similar in mid-January).

It was pretty much one-way traffic in equities, bonds and the dollar post payrolls, equities already slated to be under pressure from Alphabet’s earnings miss and Apple’s downgraded Q2 revenue guidance released post Thursday’s market close. The IT sector lost 3%, losses only surpassed by a 4% drop for energy shares.

WTI crude only lost 30 cents but Brent fell by $1.10 to $68.58. Gold fell $10 and exchange traded metals lost 1% or so on average, though iron ore added $1 to $72.94 to be virtually flat on the week.  The bigger story for commodities this week has been the resurgent coking coal price (apparently driven by tight domestic supply in China and concerns bad weather could be about to disrupt Australian shipments).

In stocks, together with Monday and Tuesday’s losses, the 2.12% drop in the S&P left the index 3.85% on the week. The S&P bottomed at 666 in the wake of the GFC and the Dow lost 666 points to 2.54% Friday, for a 4.1% loss on the week and inevitably spawning various ‘beast’ or devil-related commentary (and song references!). The FT’s John Authers opted for Iron Maiden’s ‘Number of the Best’ on Saturday’s but we’ve kept its local with one of INXS’ classics.

In FX no currency was spared pressure from a reversal in the US dollar, but with risk appetite hit (e.g. VIX to nearly 18 from 13.5 on Thursday) the AUD was the biggest causality, already under pressure since Wednesday’s slight downside CPI surprise. Incidentally, the drop back below 80 cents this week should make it easier for the RBA not to raise its anxiety level on the AUD when it meets on Tuesday (and Governor Lowe speaks on Thursday). In any event and as per Rodrigo Catril’s FX Strategy note on Friday, the AUD looks no more overvalued in real TWI terms today than when the RBA compiled its last set of forecasts back in November 2017.

CAD and NZD just about kept pace with the AUD’s downhill ski while the EUR fared the least badly against the USD. AUD/EUR has lost about 3% in the last week to 0.6361. The FX strategy view is still that we will see this cross sub-0.60 this year.

In Treasuries, the payrolls data drove extension of the recent longer end sell off with another 5bps added to 10s for an 18bps rise on the week (to 2.842%).  Of note though, 2s actually fell (down 2bps on the day). Whatever the reason, it’s worth noting that the US curve flattening has given way to bear steepening.  Since the earlier flattening went hand in hand with a weakening US dollar, will steepening herald its revival?  That’s a brave call with the DXY barely ¾% off its lows, but might mean dollar weakness from here on become less indiscriminate than it was in December and January. 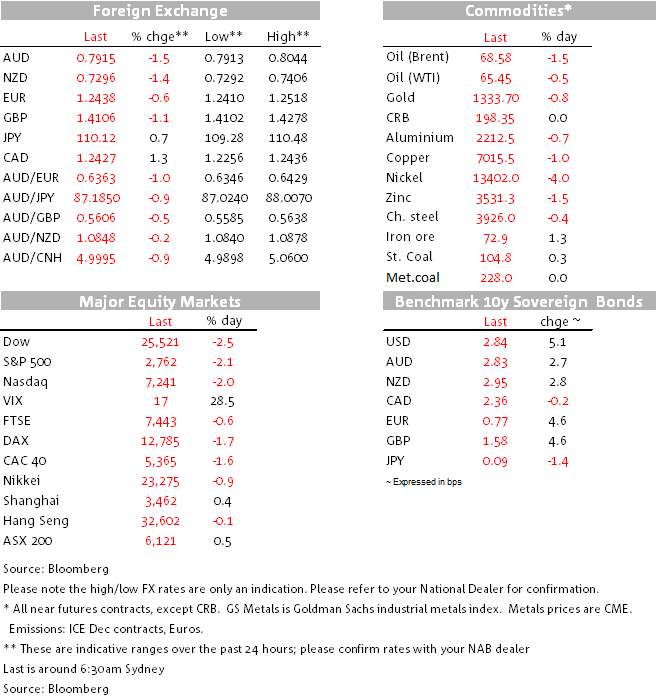