Markets Today: Dog days are over

Well it might be too early to call the recent rout in equity markets over, but price action over the past 24hrs suggests calmness has returned with European equities rebounding while US equities are relatively steady.

Well it might be too early to call the recent rout in equity markets over, but price action over the past 24hrs suggests calmness has returned with European equities rebounding while US equities are relatively steady. UST yields are higher with the move led by the back end of the curve and the USD is stronger amid news of US Senate bipartisan agreement to avoid a government shutdown. A stronger USD and price declines in the commodity complex have not helped the AUD.

As we are about to press the send button, the RBNZ has left the cash rate unchanged as widely expected and notably the interest rate track has been left unchanged, suggesting a first hike is pencilled in for Q1-2020. So a tightening bias remains, but it is still way out there in the long distant future. The Bank doesn’t see inflation reaching 2% until Q3-2020 and the unchanged final paragraph notes that “Monetary policy will remain accommodative for a considerable period. Numerous uncertainties remain and policy may need to adjust accordingly.”. Initial reaction to the announcement has seen the NZD gap about 35pips lower and the pair now trades at 0.7225.

Asia’s reaction to yesterday’s solid US equities close was mixed with Chinese stocks in particular closing in negative territory. Europe on the other hand was happy to followed the lead from the US and all major regional indices closed in the high 1%, so not quite fully reversing  all the losses from the previous days, but a good outcome nonetheless. After a solid start, US equities have crumbled in the afternoon session and look set to end the day close to flat. Meanwhile after yesterday’s roller-coaster ride, the VIX has steadily declined over the course of the NY session, it is now at 24, after opening the day at 31.38.

News of a US Senate bipartisan agreement to avert a government shutdown (see more below) appears to have been the driver for the rise in UST yields and rebound in the USD. 10y UST yields traded to an overnight low of 2.76%, but following the US Congress new a sell-off has ensued with 10y UST yields now trading at 2.84%. The move has been led by longer dated yields, bear steeping the curve. The 2y rate now trades at 2.13%, up 2.6 bps on the day.

The USD is stronger across the board with the yen the only G10 currency managing to edge small gains against the big dollar. In index terms, DXY is  +0.73% and currently trades at 90.24 while BBDX is +0.49%. USD/JPY is essentially unchanged at ¥109.50 and although the rise in 10y UST yields, on their own,  suggest USD/JPY should be trading higher, the lack of a rebound in Japanese equities (NIKKEI +0.16%) is probably the missing ingredient. After trading to an overnight high of 1.2406, the Euro now trades at 1.2270, in addition to the USD rebound, news that Merkel’s CDU and the SPD had reached a coalition agreement seemingly didn’t help the EUR. The agreement now needs to be put to +400k SPD members for a vote and a positive outcome is unclear at this stage.

AUD is amongst the biggest underperformers, down 1.05% with the rise in the USD as well as soft commodities performance the likely hindering factors.  Copper (-2.8%) and oil prices have led the move lower in the commodities complex (Brent -2.2% and WTI -2.8%) with iron ore once again bucking the trend, up 1% to $75.2. Yesterday the AUD was unable to hold above the 0.79 mark and the steady decline seen during our session accelerated in the latter part the overnight session, coinciding with the rebound in the USD and UST yields. AUD now trades at 0.7830, a few pips above the overnight lows.

With a Thursday midnight deadline approaching fast, US Senate leaders announced a bipartisan two-year budget agreement that provides nearly $315bn in additional funding. The plan includes the Republican’s wish for an increase in defence spending and gives more funding for domestic programs sought by Democrats. In theory the plan also includes a suspension of the Debt ceiling, but the time period has not yet been agreed. All that said, while the deal appears to have bipartisan supports in the Senate, support from the House is mixed. House conservatives are not happy to support an increase in spending while some Democrats said that they will oppose the deal unless there is a guarantee of a vote on immigration legislation.

In other news, speaking at a conference overnight, Fed Dudley said that the recent equity rout is not “a big story at all for central bankers.” Adding that that the only way the swoon would hurt the economy is if the market went down and stayed down. At the moment, at least, it’s looking like that might not be the case. Fed Evans was also on speaking duties and said that he sees a “hint” of inflation pressures picking up but, in his view, it’s prudent to wait until mid-year for the next rate rise. Evans, however, who is a non-voter this year and a renowned dove on the committee, caution that if  “inflation picks up more assuredly, as many expect…then we still could easily raise rates another three or even four times in 2018 if that were necessary.” A March hike is about 90% priced and for 2018 the market is pricing about 2 ½ Fed hikes. 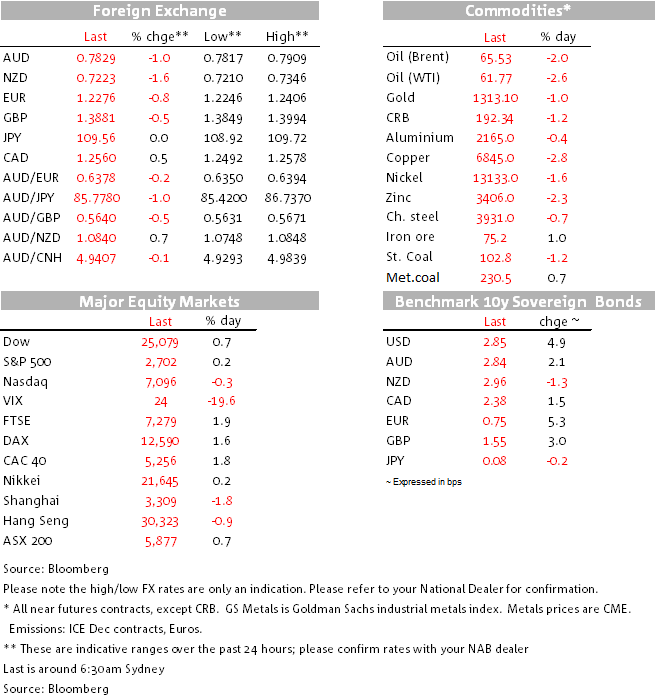