Markets Today: Driving down for Christmas?

US shares were pummelled on Friday as fears of a global slowdown widen.

Things went from bad to worse Friday starting with the RBNZ’s missive proposing that New Zealand’s large banks lift their total capital from 10.5% to 18%. Markets didn’t react immediately but within half an hour the S&P e-mini and very shortly thereafter NZD and AUD, hit the skids.   Weaker than expected China industrial production and retail sales data shortly thereafter pushed APAC equities, AUD and NZD further in the direction they had already headed.

And then came a pretty dire set of European PMI data, from France in particular – clearly impacted the ‘yellow vest’ protests – with both manufacturing and services falling below the 50 (the level that ostensibly separates expansion from contraction).  The French economy now looks to be shrinking (Italy already is) while German numbers weren’t pretty either, services leading weakness here, to see the overall Eurozone Composite PMI fall from 52.7 to 51.3.

US retail sales data that together with revisions and in underlying terms shows the US consumers to still be putting their money firmly where their (confident) mouths are, failed to ride to the rescue at the start of the NY session. It did though compound the otherwise safe-haven and EUR/USD driven bid under the US dollar to see the DXY make a new YTD high of 97.71.  AUD closed NY 15 pips or so below its 50-day moving average – a level that has been important this year – at 0.7172. It’s restarted the week little changed.

The three major US indices closed around 2% lower Friday with the China data and EZ PMIs compounding existing global growth concerns.  The health care sector fared worse within the S&P (-3.4%) after a Texas federal judge ruled that the ‘individual mandate’ provision within the Affordable Care Act (aka ‘ Obamacare) – the bit which requires all US citizens to have a basic level of health insurance cover – was unconstitutional and therefore so was the whole of Obamacare.  This sets up the first major battle between a Democrat controlled House and the Administration early next year.

Utilities (defensive) and real estate (rate sensitive) were the least worse performing sectors and consumer staples didn’t suffer as much as consumer discretionaries despite the strong retail sales data. Energy (and material) suffered as oil lost more than $1r – the stronger USD not helping here.   The VIX added a point to 21.6.

US stocks fared more than twice as badly as Eurozone stocks, and in index terms 0.5% worse than Shanghai, despite the latter’s poor economic news. Equally surprising is that Eurozone stocks are up on the week whereas all others are lower, but testament perhaps to the reliance on so many S&P500 on earnings from overseas.

Together with NOK on the aforementioned oil price drop, NZD followed by AUD were firmly at the bottom of the G10 scoreboard Friday, AUD closing at 0.6796 and AUD below its 50-day moving average at 0.7172 (this came in at 0.7192 Friday).  NZD underperformance is mildly ironic in that AUD has generally been the more sensitive to indications of slowing China growth, while one consequence of much higher capital ratios for NZ banks may be fewer profits to repatriate back to Australia as well as potential capital injections into NZ banks from their Australian owners.

GBP and EUR both lost about 0.5% on the day, Sterling on lack of any encouraging signals from Brussels on possible tweaks to the Brexit Withdrawal Agreement (re the Irish backstop) and the single currency on the EZ PMI data.

Retail sales rose by only 0.2% in both headline and ex-autos terms, but there were big positive revisions and the ‘Control’ measure that maps across to the consumption component of GDP rose an impressive 0.9% (with October revised to 0.7% from 0.3%).  Against this, industrial production at 0.6% was only positive because of a surge in utilities output, with manufacturing flat.  Nevertheless on the back of Friday’s figures the Atlanta Fed revised up its Q4 ‘GDPNow’ estimate to 3% from 2.4%.

On the week we have a mild US bear steepening; the 2/10s curve some 2bps steeper at 15.7 bps versus its recent low close to 10bps.

Internationally, German Bunds just outperformed USTs in price terms (weak PMIs to blame) while AU futures underperformed the US.  On the week, the standout feature is the slide in BTP yields on optimism that Italy and the EC are about to reach an accommodation on acceptable budget deficit targets for 2019 and beyond. 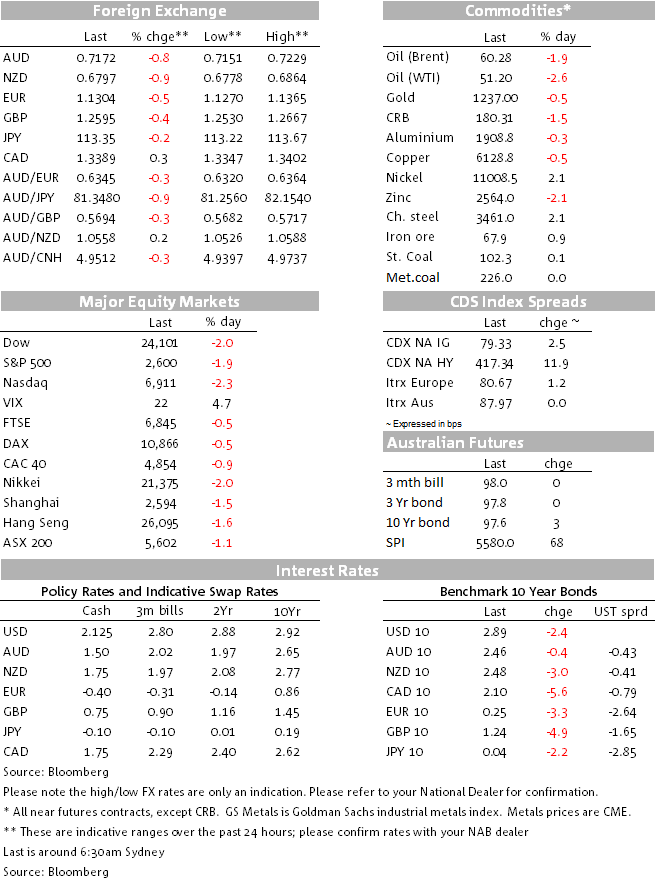