The easing of banks’ investment rules contained in the so-called ‘Volcker Rule’ has helped to boost stocks.

Overview: Back and forth

You go through changes in your life, One second you’ve got it made

Next second you’re down in the dumps..And it goes back and forth – UNKLE

After a choppy and low volume session

US equities have surged in the last hour of power. Financial have been supported by news of an easy in regulation, UST yields are little changed and the USD has consolidated recent gains. AUD and NZD are tad stronger, but remain comfortably within recent trading ranges.

US equities have ended the day with gains over 1%

But the overnight chart reveals a choppy price action as investors continue to grapple with mostly negative US virus news which continue to suggest there is an increasing  risk reopening plans in the US economy could be reversed. But as we have seen before, news of more supportive measures have yet again propped up the equity market.

Banks (S&P sector +3.57%) have lead the gains in US equities overnight (S&P 1.10%, NASDAQ 1.09%) following news regulators had voted to reduce the amount of cash that banks must set aside as collateral to cover potential losses on swap trades. The Federal Deposit Insurance Corp. voted 3-1 to pass the rule change, the Fed and Office of the Comptroller of the Currency also signed off on the changes. Regulators also removed limits on banks’ investment in vehicles such as venture-capital funds and credit funds. Those restrictions were part of a broader set of regulations known as the Volcker rule.

Moving on to US Virus news

US Initial weekly jobless claims fell by 60k to 1.48m. The fall in initial claims was smaller than expected (1.32m exp.) and the prior week’s total was also revised higher by 32k claims. Continuing unemployment claims also fell less than expected but still declined by 767k on the week. The good news is that the ongoing decline in continuing claims supports the notion of re-hiring as the economy reopens. But, on the other hand, the encouraging improvement in Jobless claims seen in May is certainly stalling in June (see chart of the day below). Thus the concern now is that the new surge in virus infections could hinder this progress. Unadjusted claims in Arizona jumped 31.8% on the week and Pennsylvania claims rose 7.6. Other states experiencing a surge in infection may follow this pattern. Following the Virus news, Apple said it was closing more stores as cases spike and Macy’s said it plans to cut about 3,900 jobs.

The USD has essentially consolidated recent gains and it is a touch stronger in index terms (BBDXY +0.1%, DXY +0.35%) and close to a four-week high. The euro is the biggest driver for the overnight USD gains while the  NZD and AUD have outperformed.

There hasn’t been any news that justifies the 0.30% euro decline overnight to 1.1218. Indeed the pair is weaker despite press reports of an improvement in the ECB’s legal entanglement with the GFCC. NZD is up 0.3% to 0.6429 and the AUD is +0.26%, comapred to yesterday’s level around this time and currently trades at 0.6887. Both antipodean currencies  continue to closely track movements in the S&P 500 and remain comfortably within recent trading ranges.

The GBP unchanged at around 1.24 after the UK’s chief Brexit negotiator, David Frost, said the UK would not agree to a mooted compromise over tariffs.  Brexit negotiations are ongoing, and there is a lot of ground to cover before UK’s scheduled leave date at the end of the year, but it remains a secondary concern for the market at present.

More so in Europe than the US, but the moves have been modest.  The US 10-year Treasury yield is 1bp lower overnight, at 0.67%, while the 10-year German yield fell 3bps to -0.47%.  The minutes to the ECB’s June meeting contained a lengthier discussion among Governing Council members about the merits of increasing its QE bond buying programme.

The US Senate passed a new Hong Kong Sanction Bill. The Bill, a bipartisan measure, would penalise banks doing business with Chinese officials involved in the national security law the country is seeking to impose on Hong Kong. A companion legislation has been introduced in the House, also bipartisan support and it needs to pass that chamber before it can be signed by President  Trump.

The Fed released its US banks stress tests report. Although the industry has performed well, a separate review of the effects of the coronavirus on the economy and financial system has led the Fed to conclude that the biggest US banks cannot increase dividends from Q2 levels or resume buybacks through at least the third quarter amid uncertainty over the course of a global pandemic.

Chart of the day: US Jobless claims looks to be stalling 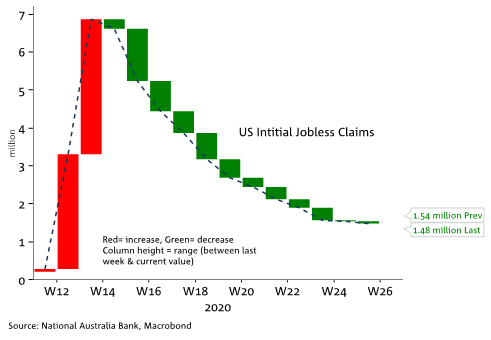 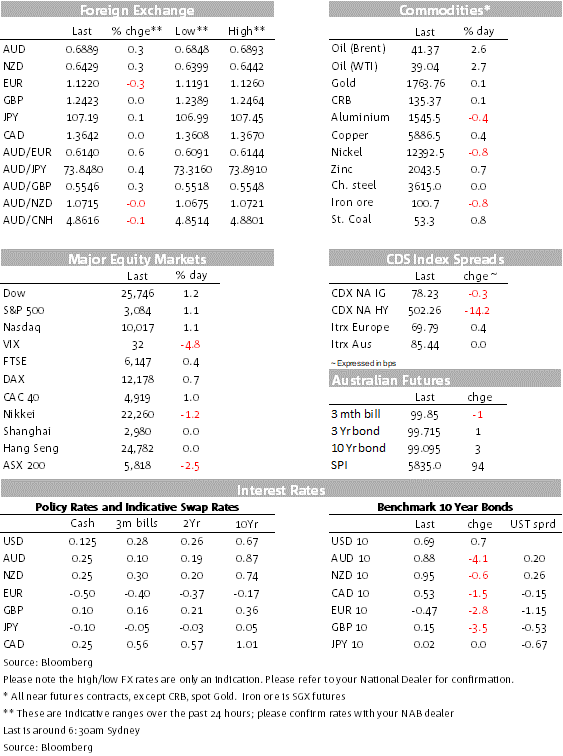