Asset markets continue to be drawn by bond markets.

Overview: Back in the high life again

Risk sentiment is back in the ascendancy, with the S&P 500 trade to a fresh all-time high (currently +1.2% on the day) and the NASDAQ +2.6% to be up almost 5% on the week, more than erasing last week’s losses. There is no blindingly obvious catalyst for this latest run up – approval of the Biden administration’s $1.9tn COVID relief plan (about to be signed into laws) was surely a long way to being discounted after the Senate approved a version of it last weekend – but it does leave us pondering whether earlier equity wobbles were more a function of the speed of the run up in US Treasury yields than the fact they have risen to above 1.5% at 10-years.  After all, 10s did jump from 1.1% to 1.6% in under four weeks, a sharper move that an least one major US bank’s strategist had surmised would be enough to trigger an equity sell-off. A 1.5% rather than 1% risk free rate is evidently no longer a problem for risk assets. Incidentally, US 10-year break evens inflation rates from the TIPS market have risen to a new cycle high of 2.295% (2.28% now), the highest levels since 2014. A further 2.5% rise in oil prices, with Brent crude back knocking on the door of $70, is a factor here.

US yields are little changed overnight, 10s +1.0bps to 1.52%.  The 30-year bond is up 4.5bps on a day when the Treasury sold $24bn worth of long bonds, though the run-up occurred pre-auction (and alongside the equity rally) with the sale itself going ok, tailing by just 0.5bp on pre-action levels. Of some note though foreign demand was some 30% lower than the last 30-year sale last Friday – and remember we are just in front of another supply onslaught to fund the $1.9tn American Rescue Act and where we view foreign investor reluctance to step up its demand as one threat to the US dollar as we go through 2021.

That said, yesterday saw the first signs that Japanese investors are putting a toe back in the water buying foreign bonds, albeit less than Y100bn, after two weeks of very heavy selling. Signs that carry is making a bit of a comeback, perhaps, and as such one factor that can keep the Yen relatively week, being a favoured funding currency alongside the Swiss Franc.  Yesterday’s NAB’s FX Strategy team revised its JPY forecast lower across our forecast horizon – including AUD/JPY now seen rising to at least Y90. The USD is in BBDXY index terms 0.5% down having been about flat when we left it yesterday evening – more below

The ECB meeting was the main set-piece event overnight. No changes to rates or the size of the PEPP programme (still €1.85tn  and to run until at least March next year). Forecast revisions were all relatively minor, meaning the ECB still show inflation missing its 2% target for the entire forecast horizon, CPI only seen reaching 1.4% by 2023. The key takeout was that the ECB will ‘frontload’ its QE bond buying in the coming quarter. Reuters reported that it would increase its bond buying next quarter well above the current €60b/month pace, but not as high as the €100b/month rate seen earlier last year, during the height of the crisis.  In the press conference, Lagarde warned that higher bond yields could lead to a “premature tightening of financing conditions”, which she labelled “undesirable .”

European bond yields fell in response to the ECB’s pledge to increase the pace of its bond buying.  The German 10-year bund yield fell as much as 6bps, before reversing most of that move, to close at -0.33% (-2bps on the day).  The real movers were in the periphery, which are the primary beneficiaries of the ECB’s bond buying.  Italy’s 10-year yield fell 8bps, to 0.6%, and the spread to Germany tightened back towards its recent lows (it itself, a EUR-positive development based on past correlations).  EUR/USD was initially weaker out of the ECB, losing about half a cent to around 1.1925, but has since recovered the loss and then some to be 1.1985 as I type, amid a broadly softer USD.

In currencies, the 0.5% fall in the BBDXY index has brought the USD some 1.3% back from its recent highs, so close to the middle of its year-to-date range. It still looks a bit premature to call a resumption of the 2020 downtrend with any degree of conviction.  All G10 currencies bar the (slightly weaker) JPY are up again the USD, with AUD just in front of CAD at up 0.66% vs. 0.64%. This puts AUD/USD up through 0.7780 (0.7888) which if we can close above on Friday will no doubt have some of the technical analysis fraternity claiming that the late February AUD correction is now over. In our FX Update yesterday, NAB maintained its forecast for AUD/USD being back at 0.80 by end Q2. 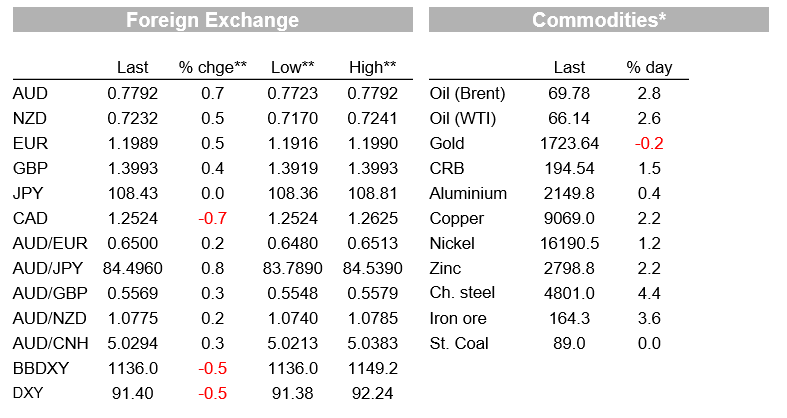 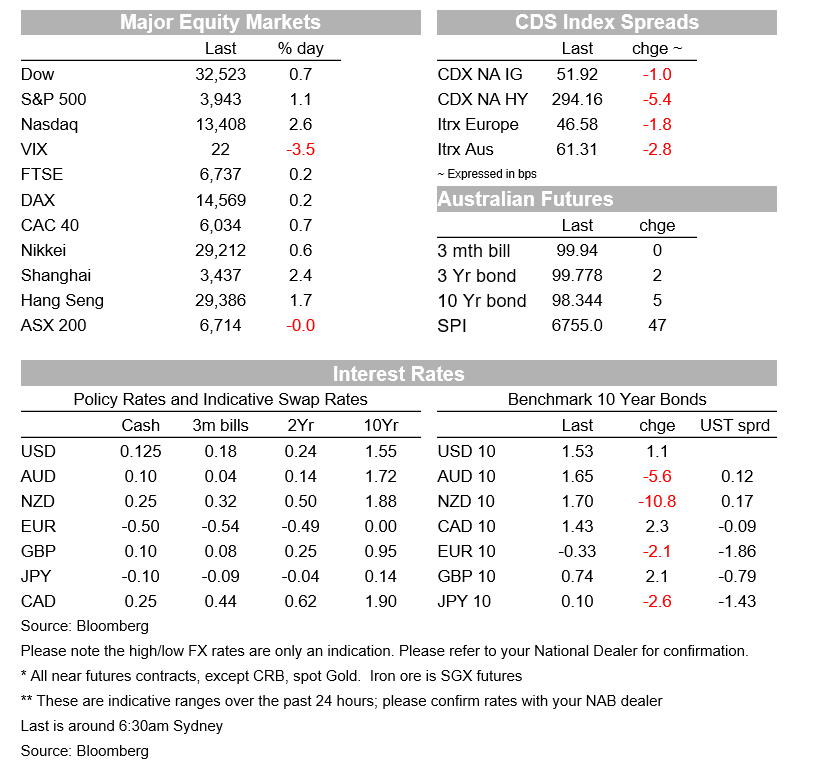