Markets Today: Equities bounce back ahead of ECB meeting

There’s been a rebound in risk sentiment.

Overview: shake it off

The S&P500 closed +2.0% after yesterday’s -2.8% decline, and the NASDAQ rose +2.7% after yesterday’s -4.1%. There was no obvious catalyst for the moves and suggests “buy-the-dip” was the most likely driver, though futures yesterday in Asia were pointing to a positive open (at Sydney close NASDAQ futures were up +1.1%).

Vaccine hopes remain high despite the setback from AstraZeneca halting trials after one person had serious spinal inflammatory symptoms, though it is unclear to what degree it is linked to the vaccine. The FT reports trials may restart early next week after investigations and the patient who had symptoms is expected to be discharged from hospital (see link).

Improved sentiment was seen in most asset markets (e.g. Brent oil +2.4% and back to a $40 handle ahead of oil inventory data today), though the small lift in gold suggests some caution remains (gold price +0.4%). Talk over a second US stimulus package continues, though with no resolution in sight – Treasury Secretary Mnuchin said “I don’t know. We’ll see. I hope there is”.

The USD was on the backfoot

With the DXY ‑0.2%. Driving USD moves in addition to improved sentiment was EUR (+0.1%, initially blasting through 1.18 to 1.1830 before meeting resistance to be at 1.1806). BBG headlines ahead of the ECB meeting today noted that some governing council members had become more confident in their forecasts for the region’s economic recovery. Further, those council members suggested the latest projections for GDP and inflation will only show slight changes to the June outlook, meaning an increased asset purchase program does not appear warranted at this stage.

Going into the ECB meeting there had been expectations of another dovish tilt. A survey prior to these headlines had a majority of survey participants expecting an increase in stimulus at the December meeting (63% of participants surveyed expect an increase in the Pandemic Emergency Purchase Program of €350bn by March 2021, with a slim majority pencilling in December 2020). You would have to say the headlines suggest reduced chances of a dovish surprise. Commentary around the recent appreciation of the Euro will also be closely watched.

The Loonie also rose (USD/CAD -0.3%) with the BoC meeting overnight dialling back some of its willingness to take even more aggressive action and sounding more positive about the recovery, recognizing that “the bounce-back in activity in the third quarter looks to be faster than anticipated in July”.

On the prospect for further easing

The BoC noted further easing is more likely to be done via QE then by rates where as previously all measures were on the table (“This QE program will continue until the recovery is well underway and will be calibrated to provide the monetary policy stimulus needed to support the recovery and achieve the inflation objective”).

BoC favouring QE while RBNZ also mooting negative rates. As my BNZ colleague Jason Wong noted in his daily, yesterday was a historic day in the NZ rates market, with the first trade at a negative yield for a nominal NZ government bond and swap rate. The 3-year bond closed the day just below zero. As an indicator of how potentially long the period of low rates will remain in NZ, the 5-year rate closed barely positive, at 0.03%, down 5bps on the day. OIS pricing continues to tread deeper into negative territory, and there is plenty of scope for swap and bond rates to grind lower from here, taking more of the curve sub-zero.

Global rates on the other hand edged higher, given the more positive risk backdrop

The 10-year Treasury yields rose +2.1 bps to 0.70%. The slight move higher in global rates was partly driven by the earlier ECB headlines reducing prospects of a dovish surprise, while the US debt issuance is high this week with $35bn offered of the US 10yr with the auction tailing 8bp.

Recent data has been strong suggesting consumers/households are still less scarred from the pandemic and from Victoria’s second wave than initially feared. Consumer sentiment for September was very strong (+18% to 93.8 from 79.5) with strong increases seen for expectations for the economy, while the time to buy a major household item also rose by a strong 16.3% to 105.1.

The rebound in sentiment means consumer sentiment is just 1.6% below the average over the six months prior to the emergence of COVID-19 in March.

Approvals are likely to slow with Victoria set to drag on the data given the extended Victorian lockdown sees in-person auctions and inspections in Melbourne not being permitted before October 26 or until the daily number of cases falls to below 5 a day.

The exception to the positive news flow overnight

Was the UK were new COVID-19 restrictions were put in place, restricting the gathering of people to no more than 6 people unless its work, school, university, a wedding or a funeral. The draft of the internal markets bill was also published with the well-flagged inconsistent provisions on Northern Ireland to the Withdrawal Agreements. The bill is touted as a safety net in case UK-EU trade negotiations fail. The bill would give Northern Ireland unfettered access to the UK and the UK could ignore EU case law on state aid. Bloomberg reports that the EU is considering legal action against the UK on this bill. Not surprisingly GBP is on the backfoot, down -0.3% and holding just near the 1.30 level.

A quiet day domestically with no data scheduled. Offshore most focus will be on the ECB meeting and on US Jobless Claims. 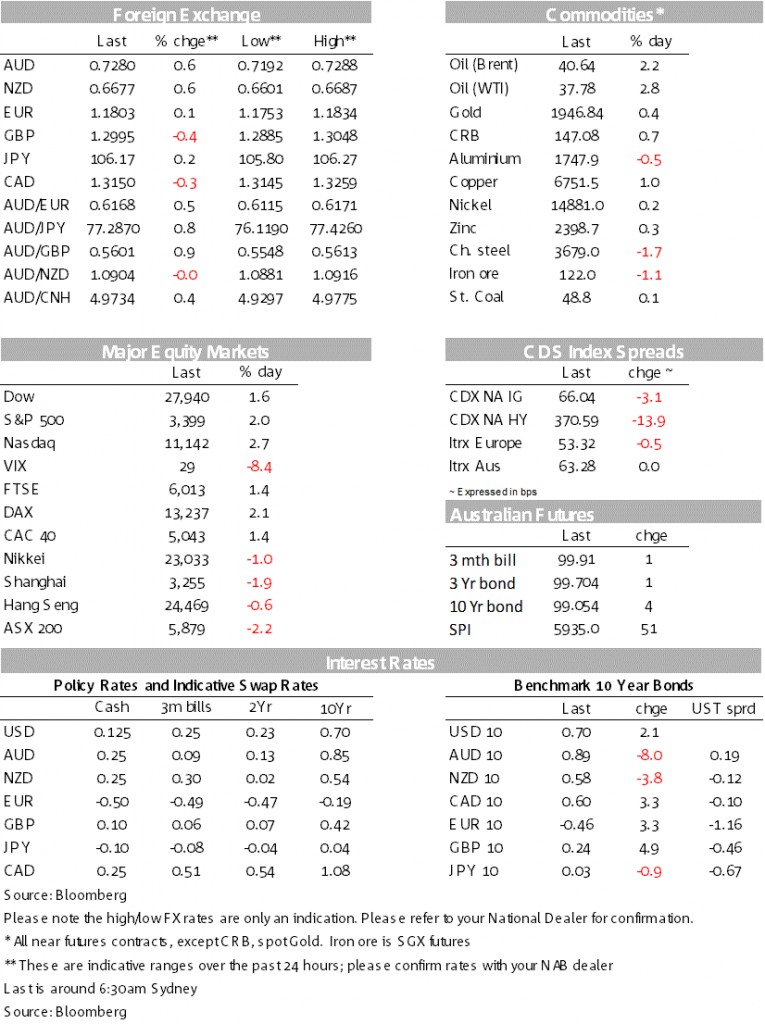