Concerns over the impact of a second wave in the US and Europe seem to be gathering momentum, driving investors to government bonds and safe-haven currencies.

Overview: Touch too much

Seems like a touch, a touch too much – AC/DC

In our regular catch up among my FX research colleagues yesterday evening, we were debating the extent to which the stock market weakness of the past three weeks was for the most part simply reflective of rotation away from the big US technology counters, where a degree of irrational exuberance had become patently evident, or whether the likes of three consecutive down weeks for the S&P500 constituted a more broad-based risk sell-off with more profound implications for other asset classes – FX included.

No sooner had we finished the call when the latter argument was seen to be winning out, losses of less than 1% for US stock futures and APAC equities rapidly morphing into a mini-rout across European bourses and a much bigger sell-off in S&P futures.

Major European indices finished with losses ranging from 3.4% (UK FTSE) to 4.4% (German DAX) with the Eurostoxx 50 ending in between at down 3.75%.

US stocks meanwhile have pulled their socks up in the last ‘hour of power’ the Dow ending down 1.8% and NASDAQ a much lesser 0.13%. The S&P ends down just 1.1% having been off as much as 2.75% earlier in the session.

IT is the only sector of the S&P 500 to end in the green Monday, suggesting the rotation play out of tech. is done, for now at least. That said, in our discussions with clients on the forthcoming US elections, we continue to warn of risks relating to likely anti-trust actions and potential regulatory changes should Biden secure the Presidency and in particular if this is accompanied by the so called ‘blue wave’ (Democrats also taking control of the Senate). This could be the case, to some extent, whoever wins on Nov 3 (or is declared the winner potentially many weeks later, an added source of uncertainty as we head towards the polls).

In grasping for the facts that fit the market figures

There seems little doubt that amongst them are the averse trends in covid-19 infection rates in several big European countries and too the United States – trends which have become more painfully evident since late last week – and the associated prospect of more draconian social distancing measures (whether self-imposed or mandated).

In the UK for example the Times (et al) was warning yesterday morning of Downing Street about to prepare the country for the prospect of new lockdowns that could last for six months or more.

We might add the lack of any tangible progress over the weekend of efforts to agree a new US fiscal support package before the income support being provided to millions of Americans under President Trump’s executive order runs out (some state have already run out of cash to meet their obligations here).

And not to be forgotten is that US stocks have been falling almost from the minute last week’s FOMC meeting concluded and where the formal shift to average inflation targeting was not accompanies by fresh physical policy measures. As our former NAB research boss was wryly noting in comment on last week’s Fed pronouncements “The Fed takes a deep scrape, but it’s still the bottom of the barrel”.

At the equity sector level

Financials have been among the hardest hit sectors (-2.5%) after the International Consortium of Investigative Journalists detailed more than $2tn in transactions between 1999 and 2017 that were flagged by global banks’ internal compliance officers as possible money laundering or other criminal activity, but the global banks “kept profiting from powerful and dangerous players”. The report raised the spectre of another round of punitive fines for banks at the centre of the investigation, who continued their behaviour even after the US had imposed penalties on the banks for such lax controls.

The risk asset sell-off has inevitably seen government bonds attract a fresh safe haven bid. In Europe, yield declines ranged from 2.7bps for 10-year gilts to -4.4bps for Bunds, while US Treasuries have experienced bull-flattening, at the NY close down 2.6bps to 0.67% at 10 years and -3.6bps to 1.42% for the 30-year. The 2-year note, which really has nowhere to go absent suggestions of negative Fed policy rates, is off just 0.2bps.

FX has had a volatile start to the week 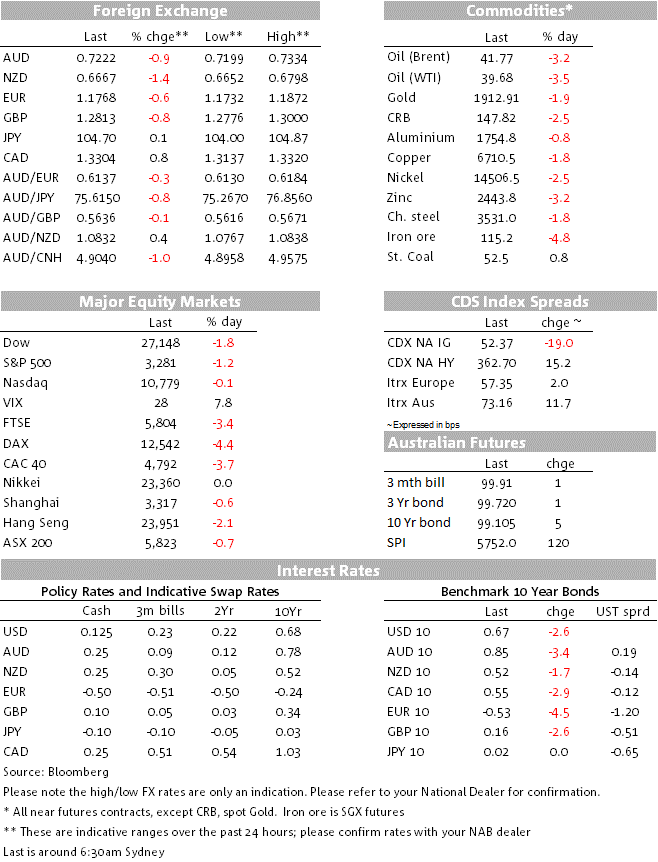