Deflation in Europe comes as no surprise but the markets are still adjusting to the shift in the Fed’s monetary policy.

Overview: Meet me in the middle

Oh baby, why don’t you just meet me in the middle? I’m losing my mind just a little,

So why don’t you just meet me in the middle? – Zedd, Maren Morris, Grey

Another day and another US data surprise

ISM beats expectations and adds further fuel to the US equity market with tech shares leading the move up. Meanwhile, US rates are a bit lower and the curve has flattened on the back of Fed operations and dovish Brainard speech.

The Euro briefly trades above 1.20 but ECB Lane comments puts the kibosh on its ascendency as the Bank highlights deflationary concerns. Speaking to Congress, Treasury Secretary Mnuchin signals willingness to find a middle ground on stimulus negotiations. AUD and NZD edge a little bit higher amid risk positive environment.

Solid US data and positive vibes on the US political front have provided further ammunition to an already fertile risk positive environment amid the Fed’s new inflation approach (average inflation) which implies ultra-easy monetary policy for  a very long time. The NASDAQ has yet again let the rise in US equity indices, closing at another record high and adding 1.39% on the day.

The S&P 500 added a more modest 0.75%, although notably compared to yesterday, overnight gains were broader with 8 out of the 12 S&P 500 subsectors recording gains for the day.

Meanwhile on the other side of the Atlantic

Mixed data and ECB comments contributed to European equities falling for a fourth session in a row, their longest losing streak in nearly three months. The Stoxx Europe 600 Index fell 0.4%, reversing earlier gains of as much as 0.8%.

Printing 56 vs. 54.5 expected its best reading since November 2018 with new orders reaching their highest level since 2004. On the disappointing side, the  ISM’s sub employment index, while rising to a six-month high in August, continued to show factories are cutting jobs. So the rebound from very depressed levels continues, but unfortunately we are not yet seeing an improvement strong enough to add new jobs to the US manufacturing sector.

Spain August Manufacturing PMI came at 49.9 vs 53.5 in July and  estimate of 53. Spain data had some of the flavour of the French PMI that went back into contraction mode to 49 from 52.4, although the INSEE survey was much less downbeat. Meanwhile Italy’s PMI came 53.1 vs 51.9 in July (Est. 52). The net effect left the  EZ manufacturing  PMI in August unchanged at 51.7, also hardly changed from 51.8 in July. So while still on expansionary mode, levels of expansion have remained below the ones recorded by the US ISM.

The EUR touched 1.20 for the first time since 2018.  The gains didn’t last though and it has fallen back to just above 1.1913 as I type, 0.20% down relative to levels 24hrs ago.  The stronger US ISM survey, comments from ECB Chief Economist Lane on the exchange rate, and profit-taking in a market which is clearly positioned ‘long’ all contributed to the reversal in the EUR.

The ECB’s Lane observed that while the central bank doesn’t target the exchange rate, the EUR/USD still “does matter ” because of its impact on economic activity and inflation.  While the ECB doesn’t target an exchange rate, it knows its monetary policy actions affect it, and it could increase its bond buying programme to try combat disinflationary pressure.  Eurozone core inflation fell to a record low of 0.4% in August, with headline inflation falling in to negative territory, although the reading was impacted by one-off factors (i.e. delayed summer sales at clothing retailers).

The move up in the Euro contributed to the initial move lower in USD indices overnight, but as the euro made U turn, USD indices recovered from a fresh two year low. DXY now trades at 92.31, up 0.18% on the day. The recovery in the USD has also weighed on the antipodean currencies with the AUD now trading at 0.7374, essentially unchanged on the day, after trading to a high of 0.7414 around midday yesterday.

The RBA kept its cash rate and 3-year yield targets unchanged, at 0.25%, at its board meeting yesterday.  However, it increased the size of its Term Funding Facility, allowing banks to borrow an additional 2% of their credit outstanding at 0.25% for three years.  Banks have drawn around $52b from the facility to date and the policy change brings the total allowance to around $200b.

NZD trades this morning around 0.6740

The outperformance in the NZD came despite the market increasing its OCR expectations yesterday and a slightly softer dairy auction overnight.  The Global DairyTrade index fell 1% while whole milk powder prices declined 2%.

Comments from US Treasury Mnuchin have also contributed to the solid US equities performance and rebound in the USD. Speaking before a House hearing Mnuchin there is bipartisan agreement on paycheck relief loans, funding for school. But sticking points remain, Mnuchin stuck to the current Republican negotiating line favouring a slimmed-down stimulus as the next step for Congress, leaving more contentious areas for later. Mnuchin said says he will call House Speaker Nancy Pelosi later today to discuss stimulus, That said we also know Pelosi has ruled out taking interim steps, so let’s see if they can find a middle ground. Watch this space.

The 10-year Treasury yield is down 3bps, to 0.67%, back to where it was before Chair Powell outlined the Fed’s new average inflation targeting regime.  The 30-year yield is 5bps lower, at 1.42%, although it remains a few basis points higher than it was pre-Powell.  There has also been a reversal in market-based inflation expectations, with the 10-year ‘breakeven inflation rate’ down 4bps to 1.77%.

Supporting the move the Federal Reserve’s daily purchase operation targeted 20- to 30-year bonds  and we also had a dovish speech from Fed Brainard  noting that “in coming months, it will be important for monetary policy to pivot from stabilization to accommodation ”, potentially signalling a shift to more bond buying and firmer forward guidance from the Fed at its meeting later this month.  Brainard added that financial stability (i.e. concerns around asset bubbles etc) was an important part of the new mandate, albeit macroprudential and prudential tools were the “first line of defence” to deal with these issues 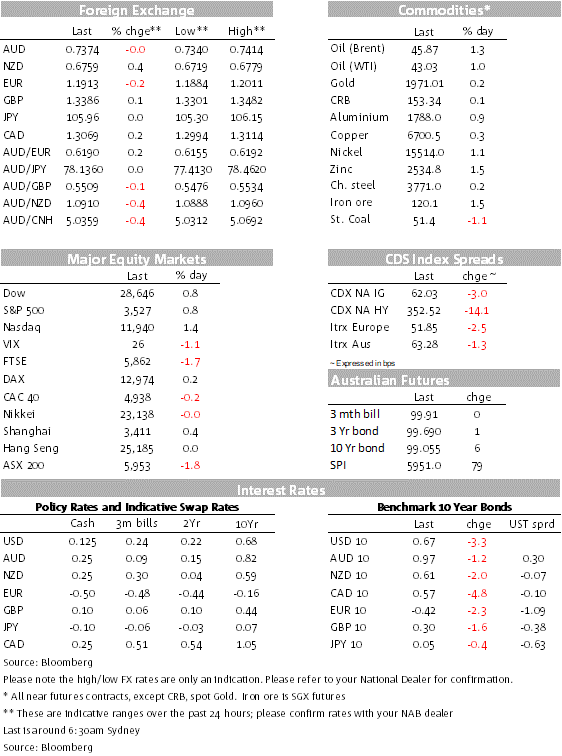