The US dollar and Treasury yields fell on Friday as Fed Vice Chair Richard Clarida said they were close to being neutral on interest rates.

Comments from Fed officials on Friday, in particular recently installed Vice-Chair Rich Clarida and Dallas Fed President Bob Kaplan acknowledging a global slowdown and downside risks as being relevant to Fed policy, and a WSJ interview with Philly Fed President Patrick Harker questioning a December rate hike, sparked a bout of US Treasury buying and US dollar selling.

The S&P and Dow posted small-scale gains on the day, with some afternoon support from comments on trade from President Trump that were seen as offering a further glimmer of hope that further tariff action could be held in abeyance following the Trump-Xi meeting in Buenos Aries at the start of next month. The exchange of barbs between US Vice-president Mike Pence and Chinese President Xi Jinping in PNG on the weekend – where disagreement resulted in the failure to agree and deliver a communique – continues to suggest this is unlikely.

The USD started falling across the board soon after 8:30am NY time Friday, immediately after first Rick Clarida and then Bob Kaplan started talking. “Certainly where the economy is today, and my projection for it and the Fed’s projection of where it is going, I think being at neutral would make sense” but then added “The global economy is something” the Fed has to pay attention to as there “is some evidence that it’s slowing.

Kaplan said “In the short run, you’ll see inflation pressures build, but I don’t think inflation’s running away from us…“So at the Fed, I think that gives us a little bit of latitude to be patient and gradual” when thinking about monetary policy.  The Fed might have further moves to go, but I’m going to avoid being rigid and predetermined.  Says risks globally are to the downside.

Later Friday, in a WSJ interview, Patrick Harker said “At this point, I’m not convinced a December rate move is the right move….but I need to watch the data over the next few weeks” before determining whether it is prudent to boost the cost of borrowing again, he said.

EUR, AUD, NZD and JPY all gained between 0.7% and 0.8% in conjunction with a smart fall in US Treasury yields averaging 5bps.  AUD got a small additional late-day lift after President Trump told reporters with respect to further tariff action that “We may not have to do that” and that he’s optimistic about reaching a trade deal with China.

EUR gains followed a bit of weakness earlier in the European session on comments from ECB President Draghi, in particular his remark that “underlying inflation in yet to show a convincing trend up”.  In market, the debate about whether the ECB might not commence ‘lift-off’ on interest rates before 2020 has already begun.

Sterling underperformed but still managed to claw back about 0.5% of Thursday’s more than 2% fall. Rising speculation that the current Brexit-related political and market convulsions could yet end up in a ‘People’s Vote’ second referendum is helping steady the ship here.

On the week, NZD is the clear winner for the third week running with a 2.1% gain, followed by AUD up 1.47% and – significantly – now sitting comfortably above the 0.73 level that it’s been flirting with three times in the last week or so.  The DXY is some 1.3% back from its intra-week high recorded on Monday.

CFTC/IMM futures positioning data for the week ended October 16th shows a slight pull back in the overall USD speculative long, due to a paring of net short in EUR, AUD, GBP and NZD, partially offset by an extension of net JPY shorts.  Paring of AUD and NZD shorts may have gone further though Friday, but is likely still significantly net short in both (now probably more so in AUD than NZD).

A mixed day overall for stocks on Friday and while the Dow, Shanghai and S&P500 all posted gains on the day, Shanghai is the only major stock market to finish the week in positive territory with losses of 1.5% or more from all other indices. Within the S&P, real estate was just about the best performing sector, consistent with its sensitivity to (now falling) interest rates.

US Treasuries rallied right from the start of New York trading on the Fed commentaries with 2s and 5s faring best as the market has a rethink about how much further rates might rise from here before the Fed considers them to be at neutral and might then pause.  On the week, bull steepening is also the theme with 5s the best performer on the curve, down almost 16bps.

Oil was relatively subdued on Friday with no major new news, while base metals did well, buoyed by the combination of a falling dollar and the aforementioned Trump trade soundbites.

On the week copper is up an impressive 4.1% while Brent and WTI crude are off 4.9% and 6.2% respectively on top of the previous week’s 4% gains:

Quiet start to the week with just NZ services PMI at 08:30, NZ PPI and Japan trade.  EZ current account tonight and ECB’s Nouy speaks in Frankfurt. More important than all will be NY Fed President Williams, speaking this evening (02:45 AEDT Tuesday morning) in a moderated Q&A.

On the week, RBA minutes tomorrow, Phil Lowe speaks at a dinner tomorrow evening. Its Thanksgiving on Thusday. EZ flash PMI on Friday will be important. 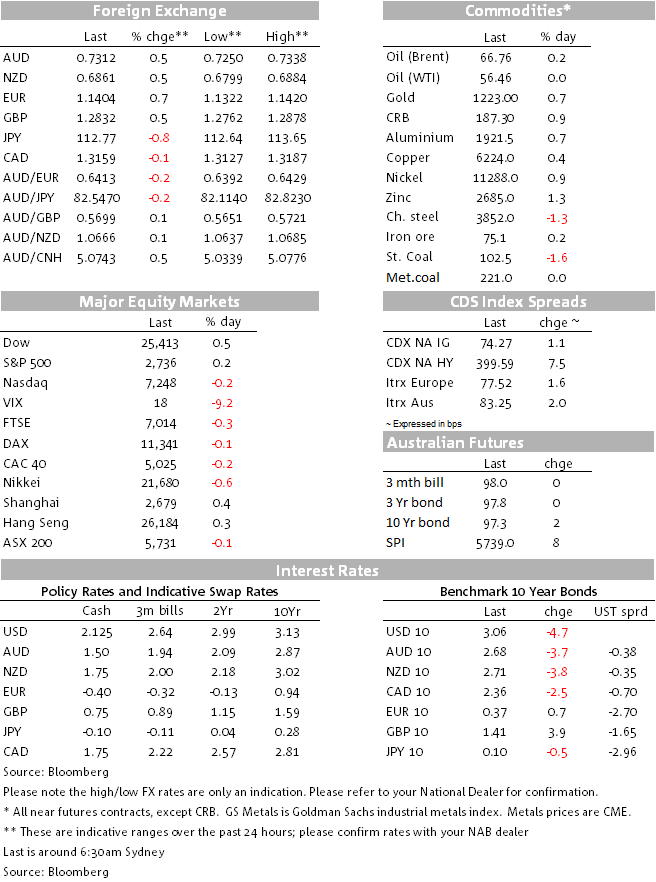