Markets have adopted a risk-on stance with the hope that there’ll be fiscal stimulus to counter the impacts of COVID-19.

Overview: Don’t dream its over

“There’s a battle ahead, many battles are lost; But you’ll never see the end of the road; While you’re travelling with me”, Crowded House 1986

Markets continue to digest the US election results so far

While counting continues, the probability of Biden securing the presidency is becoming more likely. The key battleground states left to count are Arizona, Pennsylvania, Georgia, Nevada. Biden is at 253 or 264 depending on which source you use, meaning Biden has a wider path to 270 than Trump.

The tail risk now appears to be with the Senate where likely run-offs in Georgia gives the Democrats a very narrow path to a workable majority if Biden becomes President and Harris VP. The Senate count is currently 48 v 48 with four left. Of those, Georgia’s two Senate races are looking likely to go to run-off on January 5 since neither contender has achieved 50% of the vote (Warnock-Loeffler race is already headed to runoff, while Perdue-Ossoff looks like it may with Perdue at 49.997%).

Winning those two races would be difficult for the Democrats, but does give a path, albeit very narrow.

That combination likely means a Biden Presidency’s ambitions will be curtailed in a grid-locked political scene reminiscent of the later Obama years, with few policy initiatives being enacted by Congress. Nevertheless, that also means less likelihood of regulatory changes (particularly favourable for tech) and tax changes which can be bullish for stocks.

It’s no surprise then to see the S&P500 up 2.4% with tech outperforming (IT sub-sector +3.1%). A fiscal stimulus plan in that environment can also be achieved, but ambitions of a further fiscal ramp are less likely which puts the focus back on the US Fed to support the economy in 2021.

Also adding to general sentiment overnight was further vaccine headlines with AstraZeneca stating it expects the results of its phase-3 trials to be available within the next eight weeks (the vaccine is in late-stage trials in the UK, US, Brazil and South America).

The Fed meeting overnight was largely as expected with policy unchanged

In the press conference Powell did note further monetary policy is likely to be needed and while the current pace of asset buying was right for the economy at the moment, the Fed did discuss the options around QE, including the ability to shift composition, duration and size of the bond buying program.

Those comments largely aligns with what Fed officials said in the lead up to the meeting and what markets were thinking regarding a Biden Presidency and a Republican Senate, so did not have much of an impact on markets. As for yields overnight, they were broadly steady with the US 10yr yield +0.8bps to 0.77%.

G10 FX growth proxies also continue to outperform (perhaps on notions of a Biden presidency being less confrontational on international trade) with AUD +1.4% to 0.7282 and NZD +1.2% to 0.6770.

The Aussie also outperformed on the crosses with AUD/NZD +0.2% and AUD/Yen +0.4% with markets continuing to downplay Australia-China trade headlines.

Initial Claims were little changed on the week (751k v 735k expected and 758k previously), while Continuing Claims that are delayed by a week fell (7.29m v 7.2m expected and 7.8m previously).

However, there continues to be an increase in other unemployment benefit programs, suggesting some of the decline in headline claims is due to people shifting to another program.

The Pandemic Emergency Unemployment program rose 277.6k in mid-October, while total numbers receiving unemployment benefits was 21.5m as at October 17.

The Bank of England surprised markets with a larger than expected QE expansion of £150bn v £100bn consensus (though was similar to that telegraphed last minute by British Press) .

Importantly the extension is for 12 months, with markets interpreting that maks negative rates slightly less likely (markets price -5bps by September 2021, down from -8bp on Wednesday). However, the risk remains to more stimulus and to negative rates given headwinds.

There was also a slight tweak to forward guidance which hints the BoE will allow inflation to overshoot the 2% target (“does not intend to tighten monetary policy at least until there is clear evidence…achieving the 2% inflation target sustainably”). 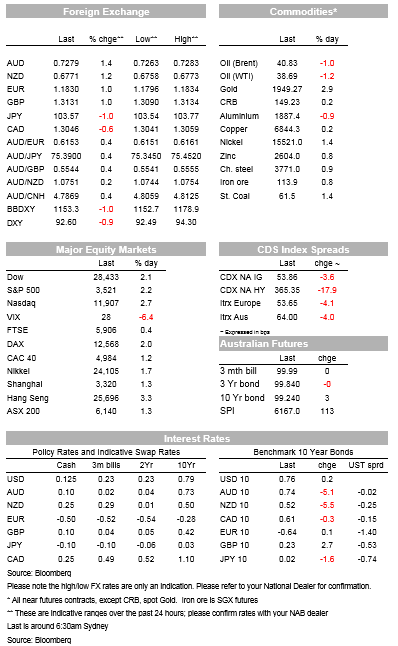