Risk sentiment has turned sour all of a sudden, with flattening yield curves preying heavily on the concerns of investors.

Overview: That don’t impress me much

The last hour of US stocks trading is often referred to as the ‘hour of power’ such is the scale of moves (both up and down) often recorded by the major US indices.  Today it would be better referred to as the ‘four hours of power’, with a large crack appearing under the market at exactly midday New York time with four hours of trading still to come.  Financials (-4.2%) have led the slide in the S&P500, a predictable response to the ever-flattening US yield curve, where the 2/10s spread has made a new post-June 2017 low just beneath 10bps (11bps now).  Adding to the malaise here have been comments from JP Morgan chief Jamie Dimon warning of flat earnings in the current quarter.

It’s not just about the yield curve though, with doubts about whether the Trump-Xi handshake and agreed 90-day moratorium on further tariff action was anything more than just that.  For one, the US administration has already had to row back on Trump’s twitter claims that China ahead agreed to reduce tariffs on US auto imports while officials on the Chinese side have been notably mum on what was agreed last Sunday (currently being ‘explained’ by the absence of President Xi and other Chinese official from the mainland).

Finally, ongoing Brexit related turmoil looks to have created some fresh ripples outside of the UK coastline, after the UK parliament ruled the government to be in contempt over its earlier failure to publish legal advice implying that the EU had a veto over when or whether the UK could avoid having to adhere to the Irish backstop contained in the Withdrawal Agreement (which as it stands would lock the UK (or Northern Ireland at least) into the Customs Union indefinitely). UK PM Theresa May currently looks to be scrambling to mitigate the risk of the government losing a no-confidence vote if parliament next week rejects the Withdrawal Agreement.

The US dollar is back – together with the Japanese yen – displaying its pre-eminent safe haven characteristics. Gains in the DXY accelerated a soon as the stock market slide accelerated, having earlier being given a lift by comments from NY Fed President John Williams who said he sees further gradual rate hikes over the next year or so (something the market is most definitely not thinking is likely judging from current market pricing that now has barely two more hikes priced into the money market curve between now and the end of 2019).  DXY has ranged between 96.0 and 97.70 in the last month, and currently sits at almost exactly 97.0, little changed on the day but up well over 0.5% from its intra-day lows.

USD/JPY is down 0.8% on Monday’s close, far and away the best G10 FX performer of the past 24 hours, having proved largely immune to the sharp US and global stock market falls in October amid an absence of repatriation flow judging from weekly Ministry of Finance data.  Perhaps this will now show up on the next few weeks’ releases.

Slippage in AUD/USD, down to 0.7340 from a high of just shy of 0.74 yesterday afternoon – latter linked to a spurt higher in the CNY – can be blamed on USD dollar gains in conjunction with the risk-off equity market tone that sees the VIX jump from just above 16 to a high of 22.  Yesterday’s RBA meeting passed largely without incident, albeit the post-meeting statement did play up the evident tightening in credit conditions for some households and reiterated concern about the prospects for household spending. GDP at 11:30 today will give us some more up-to-date colour on the latter.

The NZD has fared a little better than the AUD overnight, helped by a 2.2% rise in the Global Dairy Trade Index at the latest auction (a bit better than BNZ’s resident ‘cow whisperer’ Doug Steel had suggested yesterday). AUD/NZD is about 0.25% lower at 1.0590.

GBP meanwhile is back to flat on Monday’s close, all of the gains that came earlier on news of an opinion issued by the European Court of Justice that the UK could unilaterally rescind its March 2017 letter invoking Article 50 reversed, on news of parliament voting in favour of the government being in contempt over its earlier failure to publish legal advice to the effect that the EU had a veto over when or whether the UK could avoid having to adhere to the Irish backstop provision contained in the Withdrawal agreement (that as it stands could condemn the UK – or Norther Ireland at least – to remain inside the E Customs Union indefinitely).

The continuing bull-flattening theme in US Treasuries that carried further during our time zone yesterday was accentuated in the offshore session, with the 10yr UST making a low just above 2.88% a couple of hours ago (down some 8.5bps on the day) before pulling back up to 2.92% in the last hour.  The 2 yr note yield meanwhile has been restrained by the aforementioned Williams comments, at best down 3.5bps and currently off only 1.5bps on the day.  The 2/10s curve sits at 11bp and has been 10bps (new post-June 2007 lows).  We would point out here that as a recession lead indicator, it’s the 3m/10yr spread that has better predictive powers. This currently sits close to 50bps.

Oil is currently slightly flat on the day with hopes that OPEC+ will agree production cuts following their meetings commencing tomorrow offset by the impact of a stronger USD. Elsewhere it’s a fairly mixed picture (see table below) though iron ore has done well (+1.9%) as too metallurgical coal (+3.7%) so both reversing a bit of the recent sharp declines.

The official day of mourning for George H. W. Bush means that US stocks and bond markets (both cash and futures) won’t trade on Wednesday. Technically it will be a normal North American day for FX.

The key releases during our time zone will be first Australia’s Q3 GDP estimate, where following the various partial indicators the market consensus remains at 0.6% and NAB at 0.5%, though the partials do suggest risk to our own forecast is now to the upside.  Much depends on household consumption, not encompassed by the partials and where NAB has a 0.5% estimate (roughly 0.3% GDP contribution).

Following this we get the Caixin services and composite PMIs (former seen at 50.7 down from 50.8)

Offshore, ECB President Draghi speaks at 19:30 AEDT in Frankfurt, though the topic is ‘promoting safe and sound banks in the SSM (Single Supervisory Mechanism).  The ECB’s Sabine Lautenschlaeger also chairs a panel at the same symposium.  So probably not of much market relevance ahead of next week’s Council meeting.

The Eurozone has final services and composite PMI numbers, and the UK it’s one and only services (and composite) PMI.

Fed chair Jay Powell’s previously scheduled Congressional testimony has been cancelled (and not rescheduled) but the Beige Book will be released ahead of the Dec 18/19 FOMC meeting. 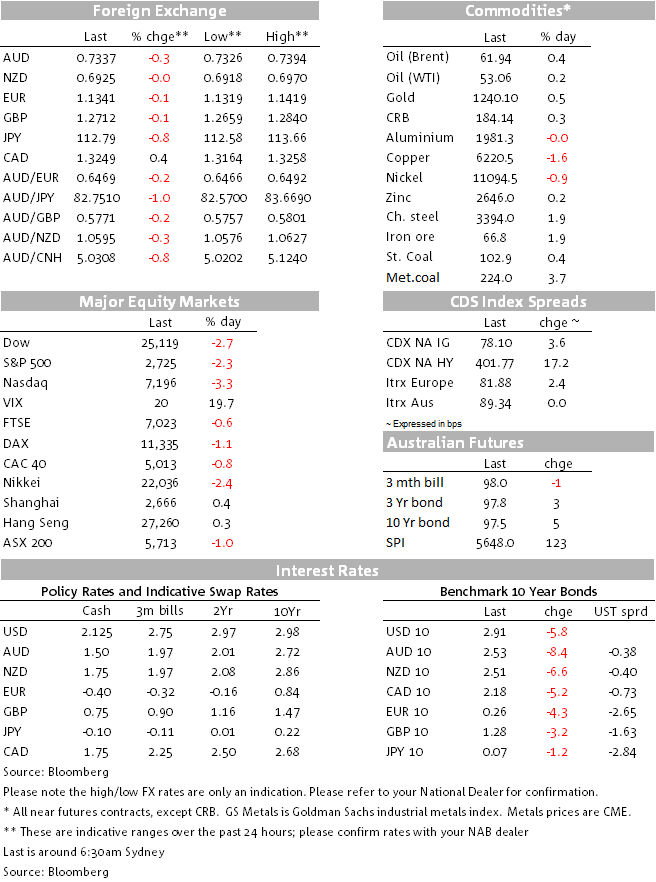