What follows the QE2 in September? NAB’s Ray Attrill says the market is expecting a flexible target, but that we can expect a ripple of surprises from the RBA today.

Not quite, but the UK prime Minister has all but confirmed – subject to sign off – that July 19 will now be Freedom Day, when all current covid-related restrictions on UK citizens will no longer be mandatory – before which, there will be full houses at Wimbledon at the weekend for the tennis finals and 100,000 spectators at Wembley on Sunday to watch the Euro 2020 final. These are just experiments remember (big petri dishes those) and the truth is that official policy is already lagging well behind where large swathes of the public already are, i.e. ignoring the restrictions.

No matter, the high expectations that England will be the first major country to formally start living with the virus, rather than fighting it at every turn, may have helped GBP be the second best performing G10 currency overnight (+0.2%) after NOK (+0.4%). An upward revision in the final UK June PMIs (to 62.2 from 61.7 for the Composite, also won’t have done any harm. All this is in the context of 64% of the UK adult population now being fully vaccinated, and over 80% having received at least one jab. Plans for a third booster shot in one arm alongside a flu jab in the other, remain under active consideration.

NOK outperformance follows the ‘no news’ of a failure to restart the OPEC+ talks on Monday as had been planned, after the failure at the end of last week to agree a phased production increase of as much as 500,000 per day from August, rising to 2 million barrels by December. The UAE’s insistence that it is currently bearing a disproportionate burden of cuts relative to its current capacity is, on the surface at least, the reasons for the impasse. Crude oil prices are up $1 on the news, Brent crude to above $77 for the first time since late October 2018. President Biden is not happy, with the US now in the thick of the driving season and higher gasoline prices something that almost invariably impacts negatively on US consumer confidence.

Not much movement in currencies elsewhere, but of some note CAD is among the weakest G10 pairs (0.15%) on a night when oil has pushed higher and the Bank of Canada’s latest Business Survey showed the Overall outlook lifting to 4.2 from 2.9, a record high, albeit the Future Sales Outlook index slipped to 47.0 from 52.0 (still close to all-time highs). The Bank of Canada meets next week and a further tapering of its QE purchases is generally expected.

In front of the RBA today, AUD was little moved during our day yesterday or overnight, currently sitting near 0.7530 (up les than 0.1% on last Friday’s New York close) . Neither yesterday’s Building Approvals data or final Retail Sales managed to touch the sides of either the FX or local rates markets. Building Approvals fell by a larger than expected 7.1% (market -5.0%) though April was revised up to -5.7% from -8.6%. The falls were led by detached houses and largely reflects the ending of HomeBuilder allowance, after the rush to receive approvals before the scheme expired at the end of March.. Final retail sales were +0.4%after a 0.1% preliminary read, thanks in large part to Victoria being revised up to -0.9% from -1.8%.

AUD was only temporarily impacted yesterday by China’s Caixin PMI services index falling to a 14-month low of 50.3 in June, well down on the 55.1 reading in May. With a greater focus on smaller firms, the survey is a more volatile version of the official PMI measure which also showed a fall in June. The fall in services activity has been put down to recent outbreaks of COVID19 in China, particularly in the Guangdong province and which has had a particularly big impact on travel. 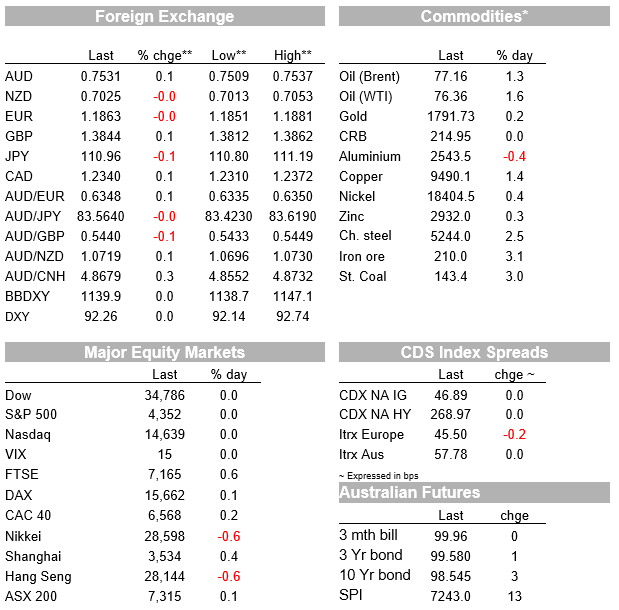 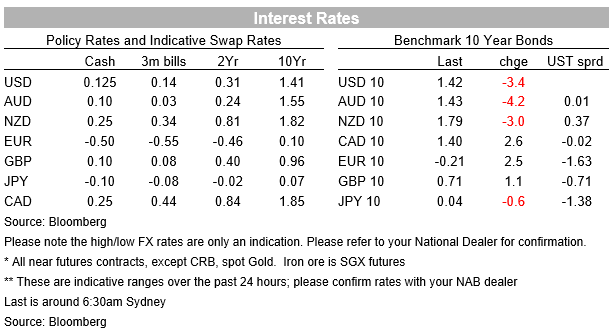