It’s been a hectic 24 hours, with shares falling them climbing back, with bond yields doing the same.

The hunter gets hunted,We all get confronted, Don’t just slip away – Red Hot Chili Peppers

Bigger than expected dovish actions by APAC central banks set the stage for an overnight hunt for yield with softer than expected German industrial production accelerating the move. Longer dated European bonds yields led the decline, but later in the US session a rebound in US equities alongside a soft 10y UST auction triggered a rebound in UST yields. After  falling close to 2% at the open, US equities have ended the day marginally in positive territory with oil prices also enjoying a reversal in fortunes following price boosting comments from Saudi Arabia. Move in currencies have been relatively subdued, the USD is little changed while NZD and AUD have bounce back after yesterday’s RBNZ shock and Orr.

It all started with yesterday’s surprising move by the RBNZ, announcing a 50bps rate cut to 1%, against expectations for a -25bps move. This was later followed by a larger than expected easing by India’s central bank (opting for 35bps than 25bps expected) and a surprise 25bps cut by the Bank of Thailand. US-China trade tensions have certainly spark concerns over a global growth slowdown and the decision by these APAC central banks to “go hard and early” has provided further fuel to concerns of a global recession.

This souring mood was not helped at the European open with German industrial production for June revealing a much bigger than expected decline (-1.5%mom vs 0.5% exp.). The  data release instigated a big demand for longer dated sovereign bonds. 30y Bunds  traded down to a record low level of -0.1467% before closing the day at -0.0962%. The move also weighed on UST yields with the 30y bond dropping 11bps to 2.12% at one point, (close to the all-time low of 2.0882% reached in July 2016) before a recovery in US equities alongside a weak 10Y UST auction triggered a reversal to the move lower in yields. The 30y bond now trades at 2.25% and the 10Y UST is at 1.73%, after trading down to 1.59% around midnight Sydney time.

The RBNZ’s move got the attention of Trump who tweeted about the three central banks that cut rates, but he blamed the US Fed, saying “…They must Cut Rates bigger and faster, and stop their ridiculous quantitative tightening NOW. Incompetence is a terrible thing to watch, especially when things could be taken care of sooo easily.”. With both the US and China now looking determined to drag their trade war for longer, both presidents are clearly looking at their respective central banks to provide support to their economies amid the trade induced headwind ahead. The PBoC is already acting by allowing the CNY to depreciate while President ups the pressure on the on an independent Fed to do its part.

In our view the PBoC’s allowance for a weaker CNY as a response to President Trump’s latest tariff action sends a signal that China is gearing up a long trade battle with the US. A protracted US-China trade war means global growth is likely to be under pressure at least over the coming six/nine months or at worst we could be facing a more severe and protracted slowdown. This also means that the Fed will need to come to the rescue, speaking overnight Chicago Fed President Evans told reporters that more headwinds since the Fed’s rate cut have emerged and risk management around the inflation outlook would alone argue for more accommodation. And “as we think we’re going to get closer to the zero lower bound with higher probability, that would also call for more accommodation”.  The trough priced in the Fed Funds rate is down to 1.02%.

After dropping close to 2% at the open US equities have staged a decent recovery with the S&P 500 and NASDAQ  closing marginally in the green, while the Dow ended at -0.09%. IT shares led the recovery and CVS health was the big winner, up 4.5% after raising its 2019 earnings forecast for the second time this year. In Europe the  Stoxx Europe 600 Index added 0.2%, after falling as much as 1.1% earlier in the session.

A recovery in oil was also a late factor for the move higher in US equities and UST yields. After entering a bear market on Tuesday, oil prices continued their decline overnight, but comments from Saudi Arabia late in the session halted the decline. Bloomberg reported that Saudi Arabia has phoned other oil producers to discuss possible policy responses adding that the kingdom won’t tolerate a continued slide in prices and is considering all options. After being down more than 3%, oil prices have reovered around 1% over the oast couple of hours to be down around 2.5% for the day.

Moves in currency markets have been relatively subdued when compared to price action in bonds and equities. The USD is little changed in index terms, but NZD and AUD to a lesser extent are the big movers following yesterday’s surprise move by the RBNZ.

NZD/USD fell by as much as 2.6% to a low of 0.6378 but it has since recovered strongly overnight to sit this morning at 0.6465, down “only” 1.2% from this time yesterday. Jason Wong, BNZ Market strategist,notes that one way to look at it is that the NZD held up surprisingly well after the escalation of the trade war (pre-RBNZ the NZD was only 30pips lower since Trump’s fateful tweet to ramp up tariffs) and the current level now better reflects the increased global risks, with the extra 15bps of easing priced into the OIS curve helping get the NZD down to a fairer level.

The weaker NZD dragged down the AUD, with the market taking the view that the RBA will also adopt an earlier and more aggressive easing policy. The market now prices a high chance that the RBA will ease again as soon as next month. The AUD fell to a multi-year low of 0.6677 and has since recovered its losses to sit at 0.6757, down slightly from this time yesterday. That being said, history would suggest the RBA has its own approach based on its own outlook of domestic and global drivers, so the RBNZ cutting aggressively doesn’t mean the RBA will follow. Governor Lowe speak tomorrow before the House of Representatives’ Standing Committee on Economics so it will be interesting to see what he has to say ahead of the SoMP that will be release a couple of hours later.

The market is looking for a widening in the adjusted current account surplus from ¥1305.7bn to ¥1756bn.  The widening is likely to have been driven by a larger decline in imports relative to exports.

China July’s trade balance in USD terms is expected to print at $42.65bn, about $8bn lower relative June. Details in the report are unlikely to paint a pretty picture with both exports and imports anticipated to show further declines in July. The market is looking for exports yoy growth to print at-1% (-1.3% prev.) consistent with the contractionary level of 46.9 in the new orders sub index of China’s official PMI. Meanwhile imports decline is seen accelerating with the yoy number expected to print at -9% vs-7.6+% previously. 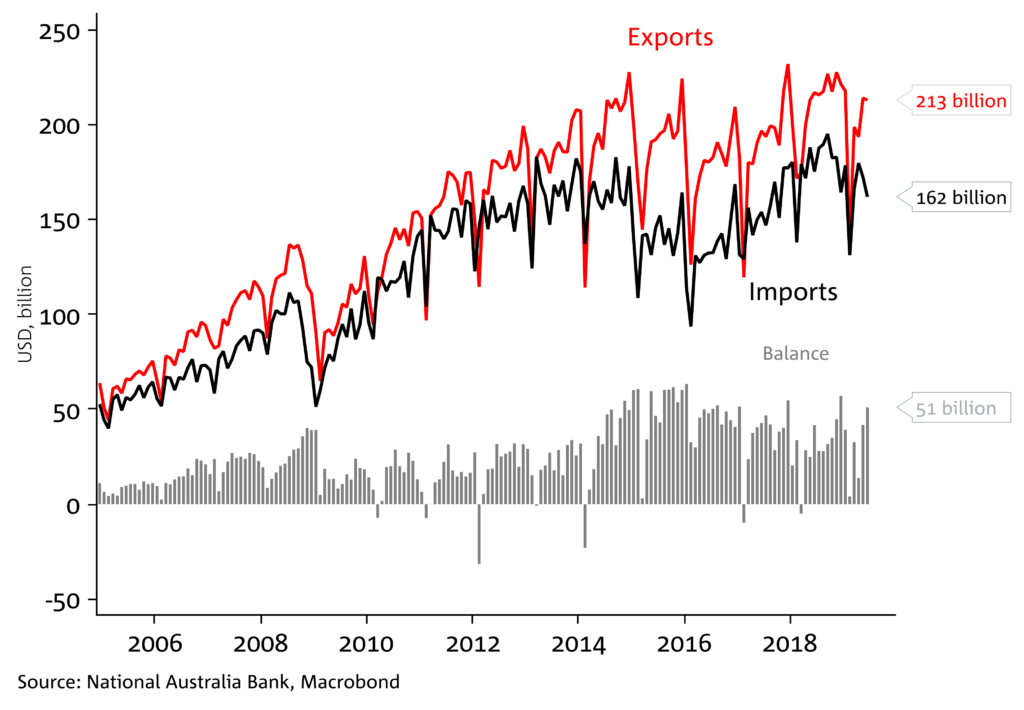 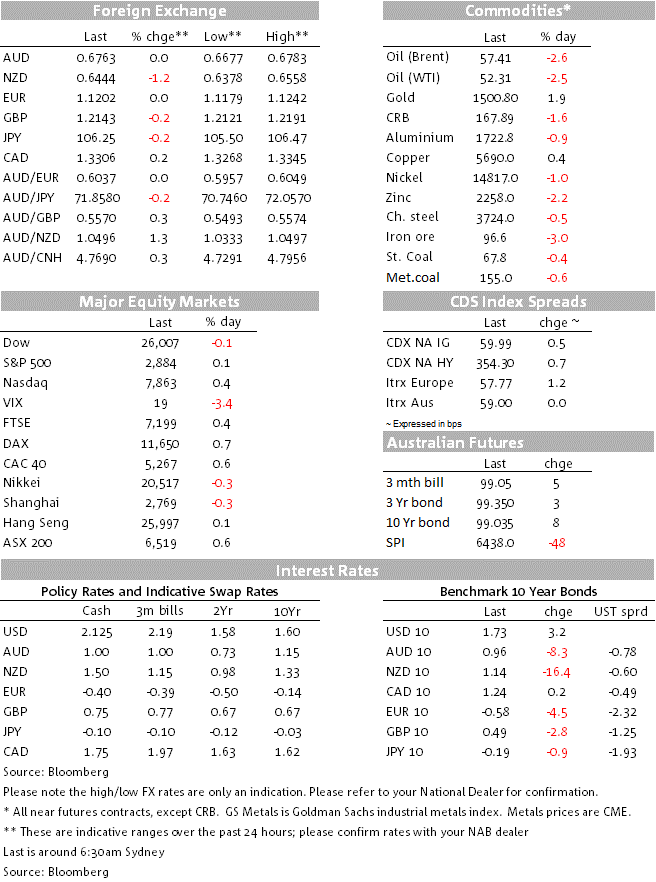