The sun has been shining on risk sentiment, commodity prices and commodity currencies overnight, the S& P 500 just finishing with a 1.7% gain, the NZD topping  the G10 FX leader board with a rise of more than 1% to be back above 0.70 for the first time this month and copper leading a 2.6% rise in the LMEX index of six industrial metals. This takes the LMEX gain in the first four days of the week to 5.9% in what looks like a much cleaner read of the strength of the demand side of the commodity price equation in contrast to the supply side issues that have plagued gas, coal and to a lesser extent oil in recent weeks and had such profound impact on prices.

Let’s see if the sun is still shining on commodity prices, commodity currencies and broader risk sentiment come Monday’s China Q1 GDP data and monthly activity data for September – where sequential quarterly GDP growth is seen at a lowly 0.4%, matching the pandemic-stricken decades long low of Q1 2020. But that is quite enough ‘glass half empty’ thinking and, for those of us residing in Greater Sydney, ahead of a sunny weekend weather forecast following yesterday’s vicious storms, plus the new-found freedoms that await on us on Monday.

Incoming earnings beats from Morgan Stanley, Bank of America, Citi and Wells Fargo haven’t been the big story behind the 1.7% overall lift to the S&P500, the biggest gainer being Materials (2.5%) on the back of commodity price gains that are led by a 3.5% jump in copper and 3.7% for zinc, commodities whose industrial uses best straddle both old and new (including renewables) economic sectors. Energy is only up 1.2% in the S&P500 even though oil is by around $1 for both WTI and Brent benchmarks.

As for the banks, while write backs of prior loan loss provisions were part of the story behind their better than expected earnings, Morgan Stanley’s investment bankers hauled in record quarterly earnings, while M&A activity was also a feature of Bank of America’s earnings lift. Shares of Morgan Stanley are up 2.4%, Citi 0.8%, and BofA 3.9%, while Wells Fargo are down 1.8% even though the latter’s EPS of $1.17 was well above the $1.00 street consensus – perhaps because boosted by a $1.7bn loan-loss write-back.

Morgan Stanley is the first Wall Street name to announce a post-earnings bond issue, of $5bn (4 and 11 years) with the $2.5bn 11-year sale (at 100bps over comparable Treasuries) not big enough to touch the sides of the latter with respect to hedging activity that can sometimes lead to a lift in yields. 10-year Treasuries are currently -2bps on the day, extending the curve flattening themes that has been a major feature of the week’s trading to data, albeit this time in (slightly) bull flattening fashion with the 2-year note currently down up but by just 0.2bp. Exemplifying this week’s curve flattening the market implied estimate of the ‘terminal’ Fed Funds Rate, as expressed by the likes of the 1-year rate 5 years in the future, has fallen from 1.97% to 1.63% this week.

This drop in terminal Fed Funds pricing might go some way to explaining why the USD sits slightly lower on the week to date at a smidge under 94.0, from 94.10 last Friday, despite having made a new YTD (and 13-monh) high above 94.50 earlier in the week. As noted in the intro, it’s commodity-linked currencies that occupy all the top spots among the major currencies, with NOK, AUD, CAD all up by 0.5% (AUD/USD to a high of 0.7427, its best level since September 7).  NZD/USD gains are more than double this, currently +1.1% in the last 24 hours to 0.7040.

Economic data released overnight includes US initial jobless claims which fell to a post-Covid low of 293k, below the 320k expected, and PPI inflation data where the core ex-food and energy reading came in a little below expectations at 6.8% (consensus 7.1%) albeit this is still above August’s 6.7%, more so on the monthly read at 0.2% against 0.5% expected.

Central bank speakers included Bank of England external MPC member Tenreyro, one of the most dovish members on the committee, who said in a speech overnight that raising rates at this point, to combat what in her view were mainly temporary inflation pressures, risked being “self-defeating”. This seems the minority view on the committee at present.  Meanwhile, fellow MPC member Catherine Mann pointed to financial markets having already done some of the tightening for the BOE, for instance by lifting wholesale interest rates, meaning she “can wait” before hiking rates – a version of the ‘Maradona theory of monetary policy’ espoused by former BoE Governor Mervyn King. Ask me if you haven’t heard this before and really want to know.

UK rates were lower overnight, but more reflecting global developments rather than any major change in the BoE rate outlook. The market continues to price around a 50/50 chance of a 15bps BoE rate hike at the next meeting in November with such a move fully price in by December.  Meanwhile from the Fed, Richmond President Thomas Barkin says of inflation that “Today, it looks more broad based”, but then went on to say only that “Because the risks are elevated, it seems like a sensible time to have the conversation about tapering” – nothing about interest rates themselves. 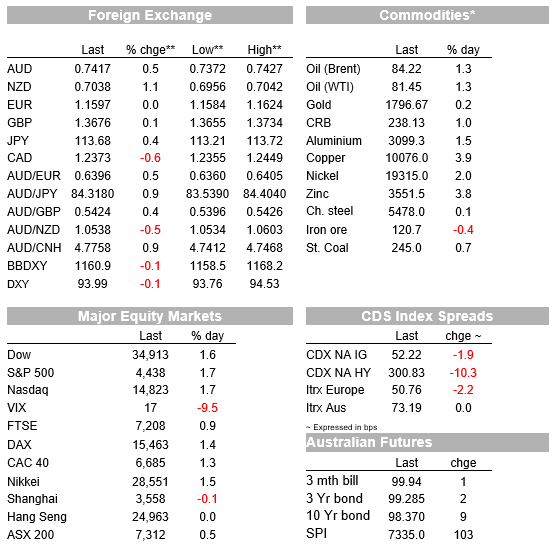 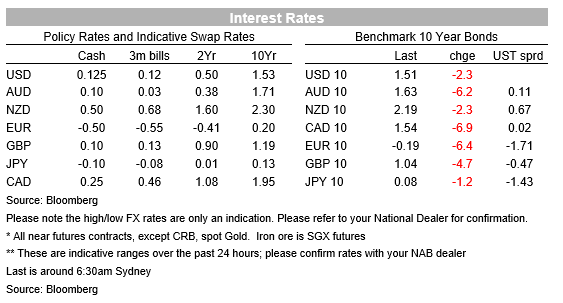