Two questions remain over the COVID-19 crisis: when is it safe to lift lockdowns and what will the debt-impact be on the economy?

If again the seas are silent, In any still alive It’ll be those who gave their island to survive

A rise in UST issuance plan with emphasis on longer dated maturities has triggered a sell-off in longer dated US Treasuries. The move up in UST yields has helped the USD, but a tinge of risk aversion is also in the air as the US continues its criticism of China’s handling of the COVID-19 pandemic. JPY outperforms, AUD briefly trades below 64c and the Euro falls below 1.08. Oil prices end their 5 day winning streak amid a supply demand reality check weighing on US energy and utility sector. European equities underperform not helped by dire EU forecasts.

The UST Treasury announced its refunding plan for the quarter and while an increase in issuance was expected, the market was surprised by the number and emphasis on longer dated maturities. Bloomberg noted that the total combined sales of $96bn for next week’s refunding – the 3, 10, and 30y auctions — compares with $84bn last quarter, a level that had held for the past five quarters. The US Treasury also confirmed that issuance of 20-year bonds would start from 20th May, the first time this part of the curve has been auctioned since 1986.

The announcement triggered a steepening of the UST curve with the move led by the back end of the curve. The 30y bond now trades at 1.415%, up 8.1bps relative to yesterday’s closing levels while the 10y note is up 4bps to 0.702%. Yields out to 5 years were little changed. European government bond yields rose in sympathy with the US and amidst concerns that the German Constitutional Court’s judgement earlier this week could constrain the ECB’s QE bond buying programme.  The German 10-year yield rose 7bps to -0.51% while Italy’s 10-year rose 11bps, to almost 2%.  French Central Bank Governor Villeroy tried to calm market concerns, saying the European Court of Justice had already decided that the ECB’s bond buying was proportionate and that the central bank would be as “flexible” and “innovative” as necessary to meet its inflation target.

The mood in Europe was also not helped by dire economic forecast from the EU commission. The euro-region economy is set to shrink 7.7% this year, facing the deepest economic downturn in its history. Officials warned that the grim economic outlook means unemployment and public debt are set to rise materially threatening the very future of the euro currency if the crisis is badly handled. In particular the commission cautioned that the crisis risks widening the gulf between northern and southern euro nations and pushing the bloc to the breaking point.

Germany announced plans to reopen all shops from Wednesday and restaurants from Saturday and said the German football league could resume (behind closed doors) in the second-half of this month.  Social distancing will remain in place until at least June and regional authorities will need to re-establish containment measures if new cases pick-up again.  UK PM Johnson said he would outline the easing of some containment measures on Sunday, with these to take effect from the coming Monday. Also on the positive side, US cases rose by 1.9% matching yesterday’s increase and printing a second day below the weekly average. But as the virus epicentre moves from East to West, California reported its largest one-day jump in new cases, adding 2,603 as deaths rose by 95.

President Trump has stepped up his push for reopening the economy, saying Americans should begin returning to their everyday lives even if it leads to more sickness and death from the pandemic. This view, to some extent, was also supported by Fed Bullard, speaking overnight the Fed official said that “The shutdown can’t go on forever because if it does, deep into the second half, then I think you risk getting into a financial crisis or even a depression scenario,” and “ if you get into that I think even health outcomes would be way worse.”

Playing into risk aversion in the air the FT is running a frontpage article noting that the White House and Capitol Hill are now looking to match the anti-Beijing rhetoric with steps to curb supply chains and investment flows. The article is consistent with official commentaries in recent days, but importantly it also shows that this is not just a US administration move, it clearly also has a fair bit of support from Congress.  Overnight US Secretary of State Michael Pompeo again stepped up his criticism of China’s handling of the virus and added that other countries are starting to see it the US way.

The USD benefited from the move up in longer dated UST yields but the tinge of risk aversion in the air was also a factor, evident by the fact that JPY was the outperformer on the day with USDJPY trading down to an overnight low of Y105.99, the pair now trades at Y106.10. The Euro now trades below the 1.08 mark weighed down by the double whammy of higher UST yields and dire economic outlook referred above.

The AUD now trades just above the 64c mark after trading down to a low of 0.6394 in the past hour. After the move below 0.64, technical analysts will be looking at whether the AUD support around the 0.6350 area holds today.  In a similar fashion the NZD has been trading with a downtrend since midnight and now trades at a 0.6008, a couple pips above its overnight low. The move lower in oil prices has also been a factor weighing on commodity linked currencies, Brent and WTI are down 3.6% and 1.7% respectively, ending a five day winning streak. The slip in oil prices was triggered by a report by the  Energy Information Administration noting crude stockpiles increased by 4.59 m/b and total petroleum inventories rose to the highest level ever, sustaining concerns about storage capacity.

European equities ended the day in negative territory, after trading in an out of positive territory. EU commission economic forecast was seen as the main factor for the underperformance, the Stoxx 600 Europe Index closed down 0.39%. After  a weak opening US equities accelerated their decline in the last hour of trading with the S&P 500 and Dow Jones indexes ending the day down  0.9% and 0.71% respectively. The energy and utility sectors were the big underperformers. Meanwhile IT  and consumer discretionary sectors kept  the Nasdaq Composite in positive territory as investors continued to bet on the likes of  Apple and Microsoft to perform well while most consumers around the world stay-at-home. 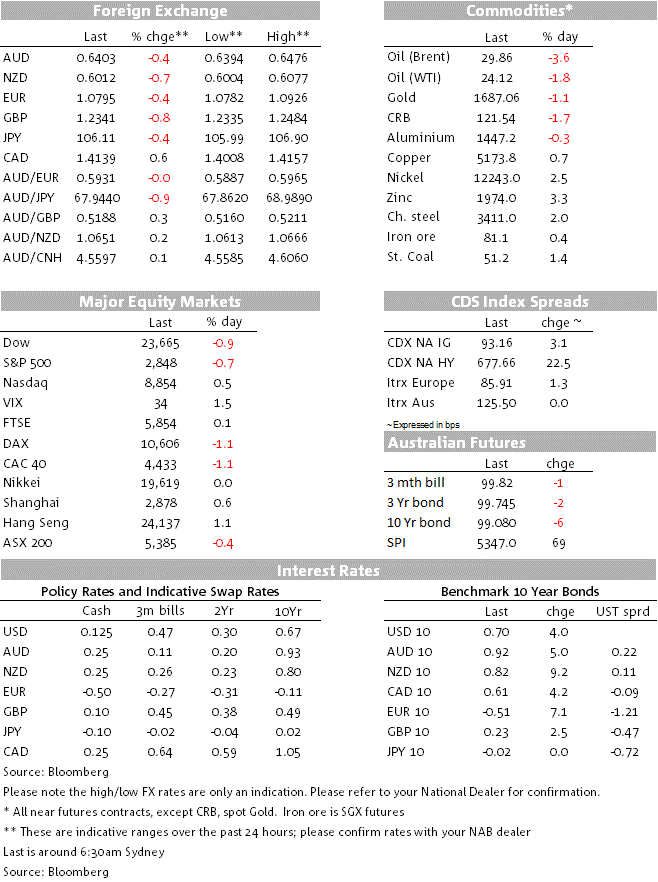