The markets are more focused on the short-term economic hit of lockdowns than the longer-term vaccine fuelled positive outlook.

Markets remain cautious, balancing a very positive medium-term outlook on well-founded vaccine hopes, against the current resurgence of the virus which has seen a number of new restrictions being imposed in the US.

New York City late Wednesday announced it would close schools and that it was “just a matter of time” before indoor dining is banned – that saw stocks late Wednesday fall into the close.

Tokyo also raised its virus alert level raised to its highest level after daily cases topped 500 for the first time.

Vaccine news remains positive overall – the latest from AstraZeneca/Oxford (albeit from phase-two trials and not from final phase-three) with their vaccine producing a strong immune response in older adults who are the most vulnerable age group to COVID-19. Astra/Zeneca also said its final-phase three results would be announced in coming weeks.

There remains little hope of a fiscal stimulus deal until after the Georgia Senate run-offs on January 5, while Trump’s reluctance to concede may dim hopes all the way to inauguration day. In this environment it will be up to the Fed to buttress the economy and the Fed’s Kaplan overnight played into that view.

The S&P500 managed to pull into the green late in the session, now up +0.1% after having been in negative territory for much of the session.

Tech outperformed with the NASDQ up 0.9%.

It is worth noting Tesla continues to surge ahead of its inclusion in the S&P500, Tesla shares rose 3.4% and over the week are up some 23%!. Tesla’s pending inclusion has also set of an acronym war for the S&P500 tech darlings – the most amusing your scribe has seen is FATMAAN (Facebook, Apple, Tesla, Microsoft, Alphabet, Amazon, Netflix).

Fed talk didn’t have an overwhelming impact, but it is worth noting that the Fed’s Kaplan said the Fed could potentially extend the maturities of its purchases if needed to provide support (“if we needed to, if this got bad enough, we could extend maturities but I wouldn’t increase the size ”).

Kapaln also noted the rebound could stall in the next few quarters and even potentially shrink in Q4 (“with this resurgence, the risks are all to the downside. The only good news, if there is a negative growth and the rebound stalls, our own view is that it’ll be temporary”).

Another complicating factor is the lack of a US stimulus package to build the bridge from the weak short-term outlook to the more optimistic medium term; note rent and student loan relief expire at the end of the year (up to 12m could be impacted).

In FX it has been a story of mild USD strength with DXY +0.1% with EUR -0.1% to 1.1857, GBP -0.3% to 1.3248 and USD/Yen -0.0% to 103.81. Weighing on GBP was the temporary suspension of EU-UK trade talks after a member in the EU’s team contracted the virus. The EU’s chief negotiator tweeted “ One of the negotiators in my team has tested positive for Covid-19. With David Frost we have decided to suspend the negotiations at our level for a short period. The teams will continue their work in full respect of guidelines.”

China’s foreign ministry yesterday outlined a number of grievance “ We have said many times that the root cause for the deteriorating China-Australia relations is Australia’s repeated wrong acts and remarks on issues concerning China’s core interests”, while a widely reported document cited Australia’s calls for an inquiry into the origins of COVID-19, comments regarding Xinjiang, and the introduction of foreign interference laws (for details please see the ABC). A thaw in relations is not yet on the horizon it seems.

US economic news was mixed

Initial Jobless Claims were higher than expected (742k v 700k expected and 711k previously), the first increase in five weeks and a likely indicator that the labour market is softening as virus cases mount and as cities and states implement new restrictions. Continuing Claims that are lagged a week fell (6.372m v 6.40m expected and 6.80m previously).

Though again there also remains the notion that some people are transferring between unemployment benefit categories given some have likely exhausted their state benefits with Pandemic Emergency Unemployment Claims increasing 223.5k in the week to October 31 to 4.4m (see US Department of Labour).

The manufacturing sector outperformed with the Philly Fed Manufacturing Index beating expectations (26.3 v. 22.5 expected and 32.3 previously) and pointing to another solid read in the Manufacturing ISM.

Yesterday’s strong employment beat did not have a durable impact on markets amid the more cautious global risk tone. Employment surprised sharply to the upside, lifting 178.8k in October (consensus -27.5k) with broad-based increases seen across most states.

The lift in employment now sees the level of employment just 0.9% below pre-COVID levels when excluding Victoria which was in lockdown during the survey period. There was a sharp rise in the participation rate and impressively when excluding Victoria the participation rate is above pre-pandemic levels and the equal highest in the history of the series at 66.1%. There was a trivial rise in the unemployment rate to 7.0% from 6.9% (consensus 7.1%).

The sharp increase in employment occurs at a time of tapering of government support, which don’t seem to have had a significant net negative impact so far on the labour market.

The reimposition of the search requirement to qualify for JobSeeker may also be partly behind the employment surge – PM Morrison said 260,000 JobSeeker payments were suspended because people failed eligibility requirements between August and October, while the ABS notes there was a large flow of people from outside the labour force back into employment in the month (5% of not in the labour force moved to employment, while 3% moved to unemployment).

It is clear that people were able to regain employment. Importantly for the outlook, the unemployment rate may again be set to peak lower than initially feared given the participation rate outside of Victoria is already above pre-COVID levels.

With Victoria re-opening more comprehensively from mid-October, we would expect a continued improvement in headline employment in coming months.

Domestically we get a preliminary read on Retail Sales for October. Offshore it is relatively quiet with only Japanese CPI and UK Retail Sales of note.

There are also a number of central bank speakers including the ECB’s Lagarde and regional US Fed Presidents. Details below: 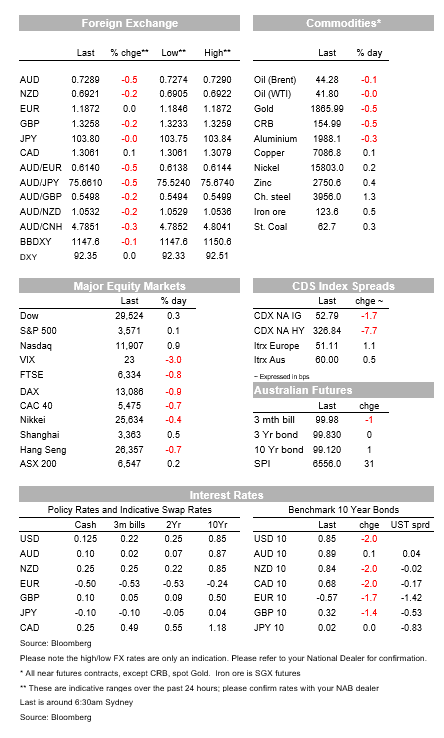