The Australian economy will take a hit from the stage four lockdown in Melbourne, but it’s not alone.

Overview: I won’t back down

You can stand me up at the gates of hell, But I won’t back down – Tom Petty

US tech shares led the charge on Friday, helping main US equity indices end a solid month of gains on a positive note. USD makes broad gains on Friday, but not enough to avert worst month in years. Month end flows a likely factor at play, but undercurrents also point to some cautiousness. Global virus hotspots, including Victoria, along with the need for more severe containment measures is a growing while US politician remain at odds on a new economic relief package.

After reporting solid earnings numbers on Thursday (after the bell), tech giants such as Apple (10%), Facebook (8%) and Amazon (4%) made solid gains on Friday, helping the S&P 500 record its fourth consecutive month of positive returns, up 5,51% while the NASDAQ climbed 6.82%. But a broader look at the US equity market depicts a more sobering picture.

The COVID-19 crisis has been good for tech companies

However other sectors in the economy are hurting, Exxon Mobil Corp. and Chevron Corp. posted the worst losses in a generation, oil over supply and  containment measures have had a big negative impact, meanwhile Caterpillar, an economic bellwether, is cutting cost to make up for a decline in sales and remains concern over the prospects for the rest of the year. The Russell 2000 index of small cap stocks, arguably more representative of the US economy than the now tech-heavy S&P500, fell 1% and was only up 3.38% on the month.

Looking at other equity markets

The Shanghai composite was the outstanding performer in July, up just under 11% while the Nikkei was down 2.59%. Both reflecting contrasting fortunes from the COVID-19 crisis.

US politicians remain at loggerheads unable to find a common ground for a new virus economic relief package. US employment benefits expired on Friday and now around 30m American face the prospect of no income support, harming the US recovery, which was already showing signs of losing momentum. White House Chief of Staff Mark Meadows said on Sunday he was not optimistic on reaching agreement soon on a deal for the next round of legislation to provide relief to Americans hit hard by the coronavirus pandemic. Treasury Secretary Mnuchin sounded a little bit more optimistic, noting that there was “still a lot of work to do” to find a compromise agreement, but talks were described as productive. The Senate is due to go into recess on Friday and the lack of breakthrough over the weekend could see risk assets struggle at the start of the new week.

…. is the increase in tensions between the US and China. Microsoft expressed interest in buying the US operations of the video-sharing app TikTok, but late Friday president Trump opposed the deal. Over the weekend, US Secretary of State Michael Pompeo said that the White House will announce measures shortly against “a broad array” of Chinese-owned software deemed to pose national-security risks. Chinese software companies doing business in the US are feeding data directly to Chinese authorities “whether it’s TikTok or WeChat — there are countless more,” Pompeo said on Fox News Channel’s “Sunday Morning Futures.”

Moving onto to currencies

The USD enjoyed an impressive rebound on Friday with JPY (-1.05%) and NZD (1.04%) bearing the brunt of it. Month end flows were probably a factor at play while some profit taking may have also played a part. Still the greenback gains on Friday were not enough to reverse the big losses for the month July with the BBDXY falling 3.3% and the EUR rising almost 5%, its biggest monthly gain since late 2010, buoyed by the €750b EU Recovery Fund.

The AUD traded above 72c on Friday ( intraday high of 0.7227), but the broad USD gains weighed on the pair before the close. The AUD closed the month at 0.7143, down 0.72% on the day, but up 3.30% for the month of July. The aussie opens the new week at 0.7130, so a little bit softer and likely reflecting weekend news from Victoria. The Australian notes this morning that Melburnians will spend the next six weeks under the strictest curfew in Australia’s history, following the introduction of new restrictions on the city’s residents. Premier Andrew’s conceded that his government’s existing strategy had failed to curtail the deadly sweep of the coronavirus across the state.

One of the factors weighing on the USD (albeit not so much on Friday) has been the steady decline in US real (inflation-adjusted) interest rates.  The 10-year US real rate fell to an all-time low on Friday, breaking below -1% for the first time.  Nominal interest rates were little changed (the US 10-year rate continues to sit just above 0.5%), with the latest decline in real rates more to do with rising market-implied inflation expectations.  The Fed is expected to alter its forward guidance, possibly as soon as its next meeting in September, to communicate a willingness to accept a period of above-target inflation.  Credit rating agency Fitch put its AAA rating on the US government on negative outlook late in the session, due to the deterioration in the fiscal outlook, but there was little market reaction.

The theme for UST yield over the month of July was a big flattening of the curve with the long end leading the move lower. The 30y bond was down 22bps and ended the month at  1.19%.

Eurozone Q2 GDP fell more than 12%, in-line with economist expectations, led by an 18.5% fall in Spanish GDP.  Higher frequency data, like the PMIs suggest the region has returned to growth, although the recent pick-up in COVID-19 cases in several countries is a risk for the outlook.  Spain reported over 3,000 new cases on Saturday, its most since mid-April.  Meanwhile, in the UK, the government announced that it was banning separate households in the parts of Northern England from visiting each other, to contain the spread of the virus, and there have been reports the government is considering sealing off Greater London from the rest of the country.

Finally a word on commodities

Gold had another glittering day on Friday, up 1.06%, but iron ore was not too far behind, up 1.05% and indeed for the month, iron ore was the outstanding outperformer, up just under 14% while gold gained 9%. Overall commodities had a good month of July with Steam coal the struggle, down 0,38%. 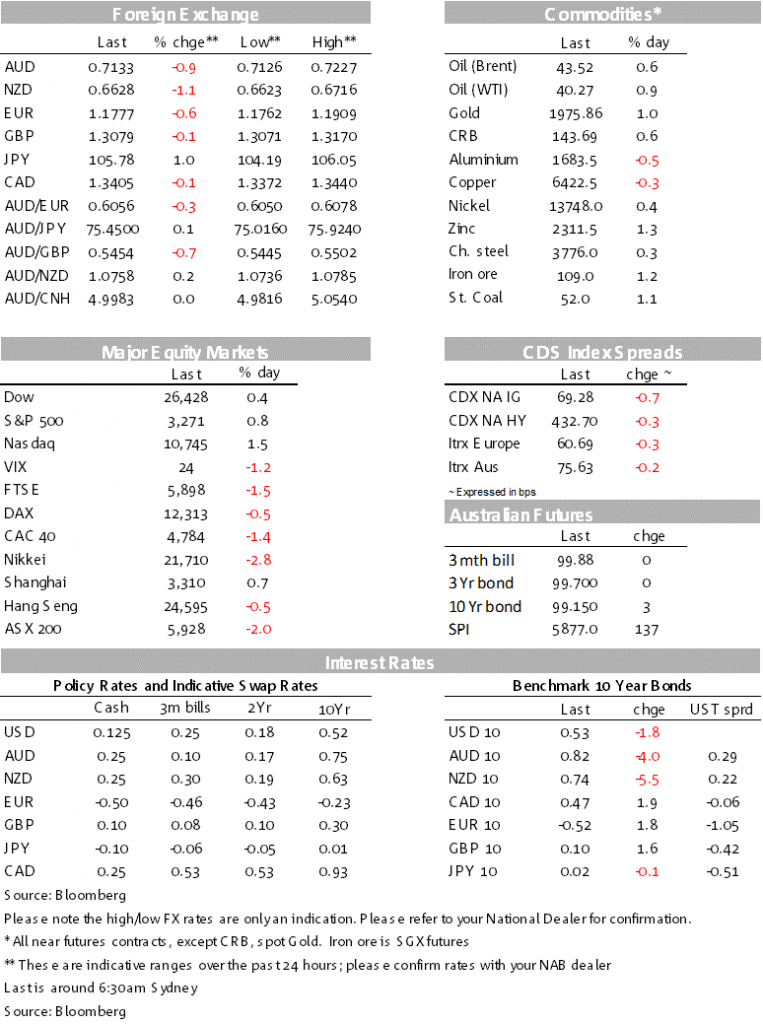