Markets Today: Where Is The Love?

Friday was a case of another day, another US dollar slide (plus new record closing highs for both the S&P500 and NASDAQ, but that almost goes without saying these days).

The week’s glamour stat., US December CPI showed core inflation rising at a higher than expected 0.3% on the month and 1.8% year-on-year from 1.7%, but you’d never have guessed that from just looking at the price action across currencies, stocks and bonds.

Nor too that US retail sales came in a fair bit stronger than expected once accounting for upward revisions to November. Headline sales printed 0.4% against 0.5% expected while November was revised up by 1/10%. But there were much bigger upward revisions to the core measures – ex autos, ex-autos and gas and most important the ‘control group’ that feeds the non-auto consumption component of GDP. October control group sales is now put at 1.4% not 0.8% and alongside December’s 0.3% rise was instrumental in the Atlanta Fed lifting its latest Q4 ‘GDPNow’ estimate to 3.3% from 2.8%.

In truth US dollar weakness had more to do with independent strength for the Euro and Sterling, the former on news early evening our time Friday that Angela Merkel’s CDU and Martin Schulz’s SPD had made an outline agreement on forming another German Grand Coalition, and the latter on reports that the Spanish and Dutch Finance ministers were said to favour a soft Brexit that kept Britain as close to the EU as possible.

USD weakness meant AUD/USD finally made mincemeat of the 0.7880-90 resistance area that had been functioning at mid-week, to a high of 0.7922 and close of 0.7917, the latter the highest since September 26th.  In terms of Fibonacci retracement levels , AUD/USD has now recouped more than 61.8% of the September-December decline and it has to be expected that we will retest 0.80 sooner rather than later and if so then quite possibly the 0.8125 2017 high.

There were significant comments from Boston Fed President Eric Rosengren on Friday, who is proving to be one of the leading lights advocating changes to the Fed’s self-imposed 2% ‘point’ inflation target, and who of late has been advocating four Fed rates rises this year versus the Fed’s median ‘dot’ forecast suggesting three.

Rosengren said the recent drop in U.S. unemployment could spark a surge in inflation that, given the Federal Reserve’s current policy framework, could trigger interest-rate hikes that bring on a recession.  “I‘m disagreeing with that framework” Rosengren said, referring to the Fed’s “balanced” approach to achieving a 2-percent inflation target and full employment. “My concern is if we get too far away from where we want to be on a sustainable unemployment rate, and we use this current framework, we will get to a situation where we have to raise rates fast enough that we will actually find it very difficult to get back to full employment without causing a recession.” Rosengren suggests replacing the 2-percent inflation target with a target range for inflation of between 1.5 percent and 3 percent, in line with actual experience over the last 20 years. Under current conditions of low productivity and labor force growth, he said, the Fed would target inflation at the upper end of that range, and would be more patient with rate hikes.

How this debate (and inflation) evolves once Jay Powell takes the Fed reins in February is a big deal for how the US dollar – already through the 2016 lows in narrow (DXY) index terms – behaves this year.  In particular, adoption of a target range for inflation and lengthy tolerance of inflation above 2% will imply real US rates will be falling not rising even as the Fed proceeds with gradual policy tightening. This would almost certainly be US dollar negative.  Added to this is the emerging debate about the USD implications of rising US twin deficits post December’s tax deal that is slated to add up to $1.5tn. to deficits in the coming decade.

On the European rates sides, Bundesbank President Jens Weidmann helped bring Bund yields down in late trade on Friday. Though Weidmann reiterated that he thought a firm end date for ECB QE was justified, he played down the chances of an imminent interest rate rise.  “It would be particularly stressful for the banks if the long period of low interest rates were to be ended by a rapid, sharp increase in interest rates,” said Mr Weidmann. “As far as central bank rates in the euro area are concerned, however, the immediate risk of change is currently low.” This is almost funny (and very far from ‘dovish’) in so far as no-one thinks the ECB had any intention of rates this side of QE ending, notwithstanding the shifting tone evident in last Thursday’s December ECB minutes.

Weidmann’s comments failed to prevent the Euro being the strongest G10 currency Friday thanks to the German political news, up 1.41% to 1.2202, its best since late December 2014, closely followed by GBP/USD, up 1.40% to $1.3728 and its best level since the day the Brexit referendum result was known.  As well as the aforementioned ‘soft Brexit’ news headlines, rumblings about a possible 2nd referendum once the terms of Brexit are known (or indeed if there is ‘no deal’) continue be heard.  It has to still be a long odds bet, though the Guardian penned a good piece on this over the weekend if you’re interested: https://www.theguardian.com/commentisfree/2018/jan/14/how-and-why-britain-might-be-asked-to-vote-again-on-brexi

Also released late Friday afternoon in China were the December credit and money supply data.  These came in a fair bit weaker than expected and versus November, in particular Yuan loans at CNY584.4bn down from CNY1,000bn. expected and CNY1,120bn last time.  Broader Aggregate Social Financing was CNY1,140bn (1,500.0bn expected and down from 1,598.2bn) while M2 money supply growth contracted to 8.2% from 9.1% and against expectations for a rise to 9.2%.

Together with Friday’s weaker December import figures, evidence of further tightening in financial conditions should lead to further questioning of the sustainability of the recent strong run up in commodity prices. The latter were mostly firm again mixed Friday, oil up another 50-60 cents (though Brent still shy of a close above $70); gold up $12 and the LMEX index +0.2%, though iron ore lost 30 cents to $77.37. 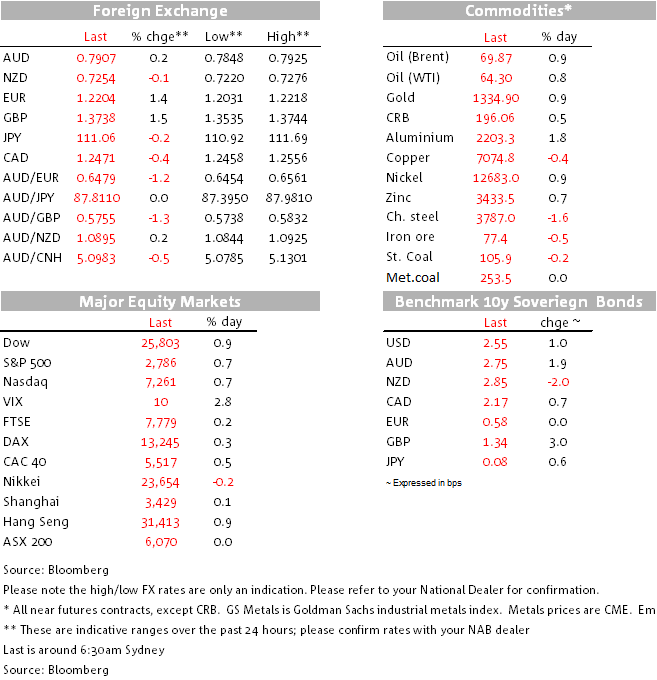