US and European equities are up again on reports President Trump is delaying auto-tariffs due to kick in this weekend.

Offshore equity markets have taken heart from press reports that the White House is likely to delay for six months a decision to implement auto tariffs of up to 25% on EU and Japanese cars and parts.  One trade war at a time please.  The Administration is yet to get the revised NAFTA through Congress and a further broadening in trade wars might be likely to diminish chances of success on that front, US political analysts think.

In the battle for the least ugly shirt, as Ray put it several weeks back, weaker than expected Chinese growth numbers yesterday were followed up by weaker than expected US Retail Sales and Industrial Production reports for April, some economic “sand in the gears” for the US economy for now.

The US 2-year Treasury yield is down 3.69bps overnight as the market moves to not only price in one cut by the end of this year from trade war news but less certainty about the pre-trade war domestic economic momentum. 10-year yields fell 3.7bps to 2.3732%.

US Retail Sales dipped 0.2% on the back of weak auto sales that was already signalled by separate sales data.  Even so, a 0.2% rise was the consensus and not only did auto sales decline by 1.2%, but there was an unexpected 1.9% decline in sales of building materials and a 1.3% drop in electronics.

The report flew in the face of higher-frequency Redbook sales, but these are the numbers and suggested a sot start to Q2 after what was then a re-assuring March.  The US job market and employment conditions remain strong, and with new housing demand strong in recent months (the NAHB Housing Index picked up to a very strong 66 in May after having dipped down to 56 at the end of last year), sales of building materials are set to recover.

Together with US Industrial Production undershooting, down 0.5% as it was for Manufacturing against expectations of a flat result, the Atlanta Fed wound back their GDPNow for Q2 growth from 1.6% to 1.2%.  Consumption is still expected to grow by 3.0% thanks to a strong end of Q1, though that estimate was wound back from 3.2%.

In the midst of these reported US economic growth headwinds and the mildly risk-on news of a decision delay to increasing auto tariffs, the DXY has not been making new headway.  The line of least resistance for the AUD remains down, first from the absence of a US-China trade deal and then followed up by a soggy NAB Business Survey for April (with its weaker employment index), uninspiring wages yesterday and softer than expected Chinese growth reports for April.

We can be confident that the Chinese authorities will inject more support for the economy to support growth as needed, through the likes of greater lending for business, fiscal support, and perhaps cuts to reserve requirement ratios.  The PBoC has less leeway with the USD-China exchange rate given a need to manage reserves.  The market thinks that the Fed will in time come to the rescue and ease to support the US economy, even though the mood music from Fed speakers makes clear they are sitting and watching to see how trade and other issues play out.

On the commodity front and despite top line news on Chinese industrial production “only” grew by 5.4%, cash iron ore rose $2.61/t overnight to $96.95, the highest since July 2014.  Of course, while this reflects in large part Vale’s production woes, the Chinese Steel PMI picked up in April to 52.1 from 46.8, the highest since last August, while “Ferrous metal smelting” production rose 8.9% y/y to April.

While there have been some hiccups with US growth, there was an element of reassurance from both the first cut of German GDP for Q1 and restated Eurozone GDP.  Germany’s came in at the expected 0.4% after a weak second half last year when the economy contracted by 0.2% in Q3 and was flat in Q4.  Though statistical elaboration in the initial GDP print is lacking, the Statistics Office reported that domestic demand supported growth, featuring Construction that rose 3.9%.  Eurozone GDP was unrevised at 0.4%/1.2%, including also France growing by 0.3%, the Netherlands by 0.5% and Italy by 0.2%.

The Euro was weakening into the London session last night, but has recovered on this report of delaying the auto tariffs, trading at 1.12 this morning. The CAD was also drifting lower in the earlier part of the session but saved by the auto tariff and US-Mexico-Canada trade agreement read through news.  US Treasury Secretary Mnuchin told the Senate that the US is close to a deal with Mexico and Canada to remove tariffs on their steel and aluminium.  Canada’s April CPI in headline terms was right on the expected 0.4%/2.0%, while the Median Trim Core rates missed expectations by one the tenth, the Common measure in line, the three at 1.8-2%, close to the BoC’s 2% inflation target. 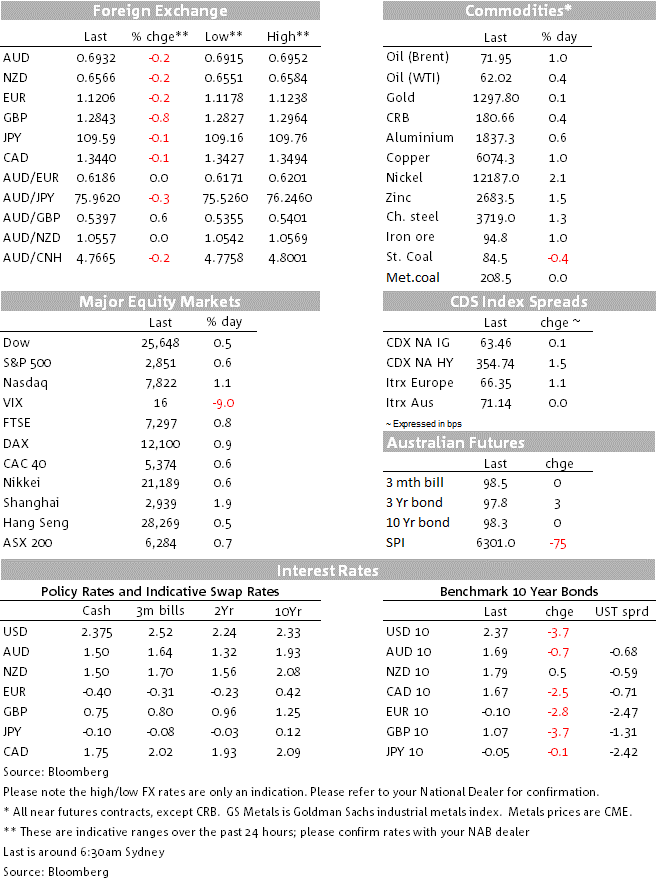