Markets Today: Markets cling on to stimulus hopes, but maybe after a Biden victory

Donald Trump continues to talk about a stimulus deal, even though he said it had been shelved.

Livin’ On A Prayer was Bon Jovi’s second number one hit from their third album Slippery When Wet. The track nearly didn’t make it to the album as Jon Bon Jovi didn’t think it was good enough. The success of the song is partly attributed to being released at the right time and the right place, a loving young couple trying to make it against a backdrop of relentless hardship in New Jersey. Well, equity market have extended their gains for a second day without any concrete developments justifying this renewed enthusiasm. Instead today’s equity  gains can be attributed to Trump’s apparent u turn on halting stimulus talks while House Speaker Pelosi suggested Mnuchin appears to be willing to talk again about a broad stimulus package. Meanwhile core bond yields have drifted lower, perhaps reflecting incredulity over the US political developments and some concern over the ramp up in COVID-19 infections in Europe and the US. The risk on tone has benefited commodity linked currencies with NZD lagging behind amid dovish RBNZ rhetoric.

As I type US equities are enjoying gains between 0.30% and 0.75% with all 11 sectors in the S&P 500 up on the day. The Energy sector is the notable outperformer up 3.56% with oil prices are up by a similar amount following news Hurricane Delta looks set to lose strength before coming ashore in Louisiana. Early in the session, European equity markets advanced to a three-week high with the Stoxx 600 Index ending the day up 0.8%.Rolls-Royce was the highlight, jumping  25% and up 53% on the week with investors seemingly liking the engine maker recent move to shore up its balance sheet.

Now onto the political US drama. Markets appear to be travelling with renewed hopes that Republicans and Democrats are back talking about a broad fiscal stimulus plan. House Speaker Pelosi rejected suggestions by Trump and other Republicans to look at stand-alone bills to aid airlines and other sectors of the economy and remained firm on the her position that Democrats are only willing to consider a broad stimulus package. The rejection added to the uncertainty, but shortly after, speaking to Bloomberg Pelosi said that after speaking to Mnuchin she drew the “inference” that the Treasury secretary was interested in broader stimulus talks and the two are expected to continue to talk on Thursday NY time. Adding to the hopes of a stimulus being agreed this side of the election, speaking to Fox Business, President Trump said that talks on an economic stimulus plan are now “starting to work out.”.

For now it seems that the US political drama still has more to play out. Market participants are travelling with the idea that a new round of US fiscal stimulus is coming regardless, the uncertainty is more around whether it will happen before the election and how big it will be. The fact that Republicans are back on the table has to imply they are willing to move closer to the $2.2 trn Democrats proposal. The other observation is that the erratic moves from the President are seemingly not resulting in an improvement over his chances for being re-elected. Markets don’t like uncertainty and investor confidence is growing that Biden will win the Presidential election by a clear margin, reducing the risk that Trump disputes the result. Betting markets put the probability of a Democrat clean sweep of the presidency, House and Senate at over 60%. Thus, it seems investors are embracing the prospect of a huge Biden fiscal spending plan with concerns over higher taxes and regulation likely to a story 2021.

Moving on to the rates markets, core global yields have drifted lower over night with 10y and 30 y UST yields down `2.4bps to 0.764% and 1.562% respectively. Against a backdrop of declining yields, overnight a 30y US bond auction drew tepid demand with a bid/cover (2.29) and indirect buying (62%) both roughly half a standard deviation below the one year average. US initial jobless claims were essentially unchanged last week, at an extremely high level, suggesting the labour market is losing steam and reinforcing the case for another fiscal stimulus. Early in the session 10y Bunds closed the day 3bps lower ta -0.526%, other core European yields also ended lower.

One dynamic that might be playing on bond investors mind is the rapid increase in COVID-19 infections around Europe and the US. Health Care systems are getting better at dealing with the pandemic, but the big increase infections rates ahead of the Northern Hemisphere winter does suggest more stringent lockdown measures along with self-impose restrictions seem likely. France and Spain posted record increases in coronavirus cases with new infections in France jumping by 18,746 while the seven-day rolling average of new infections, rose to 12,853, its highest level yet. New York and New Jersey recorded the most new Covid-19 cases since mid-May, New York recorded 1,836 positive tests and in New Jersey, the state recorded 1,301 new cases, the most since May 19.

The ECB September Minutes were released last night and arguably they reinforce the recent dovish rhetoric by ECB speakers. The Minuets highlighted the Council’s concerns over persistent weakness in inflation, including downward pressure from a stronger Euro as well as increased risks created by a resurgence in COVID-19 infections. Fast forward to today, excluding a slightly lower euro, the other ECB concerns have intensified since then. On the currency itself, worth noting that the ECB’s September meeting showed a bit more concern about the EUR exchange rate, with a further appreciation seen to present a “risk to both growth and inflation.”  The September meeting took place shortly after the EUR had reached 1.20 for the first time in over two years. The minutes noted it was “the pace of the euro’s appreciation, rather than the level of the exchange rate, that could become a concern”. The EUR dropped temporarily but it is now back to almost unchanged on the day, at around 1.1760.  We expect a renewed appreciation in the EUR next year, in the context of broad-based USD weakness alongside an up and running EU Recovery fund. Provided EUR gains are reasonably steady, we don’t think it should meet too much resistance from the ECB.  In other currencies, the JPY is unchanged overnight while the GBP is up marginally (+0.15%).

AUD now trades at 0.7165, up 0.36% on the day. The improvement in risk appetite evident in the equity market the likely main driver for the AUD gains. At current levels the AUD remains around the middle of  its recent 0.70 to 0.74 range held since late August. For now the AUD fortunes remain largely dependent on equity market’s direction with US stimulus dynamics/shenanigans the mains source of volatility.

The kiwi came under pressure yesterday following dovish remarks by RBNZ Assistant Governor Christian Hawkesby and Chief Economist Yuong Ha at a media briefing. RBNZ comments have reenergised market conviction in a negative OCR next year.  Hawkesby emphasised that inflation and employment were expected to be well below their respective targets over the next three years, which provided “a very clear signal in terms of our dual mandate to be providing stimulus.”  Ha reiterated that the RBNZ sees the path of least regret as meaning it would “rather do too much too soon than too little too late ”, in terms of easing.  The comments come after a run of stronger domestic economic data of late, implying a better growth outlook than the RBNZ had forecast, but the clear message is the RBNZ is still set on easing further.  NZD is little changed over the past 24hours, now trading at 0.6581, after trading to a low of 0.6547 yesterday afternoon following the RBNZ remarks 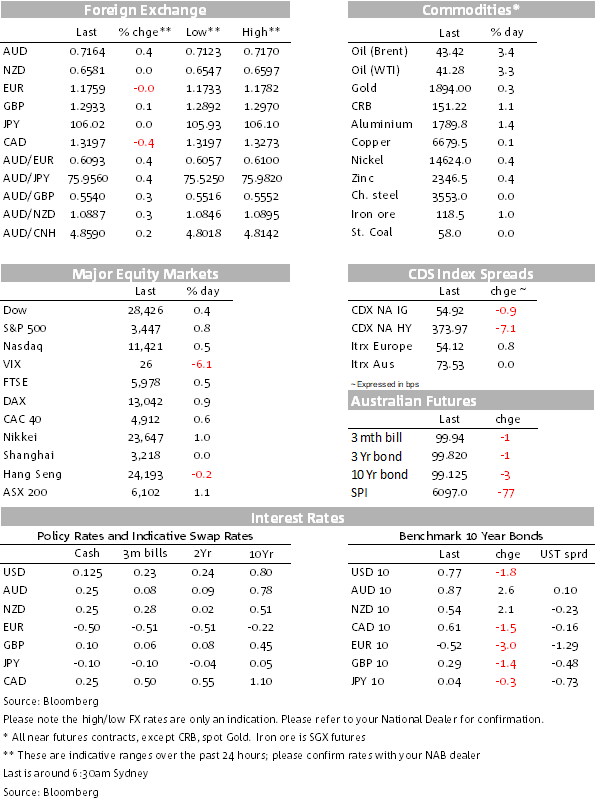