Overview: Falling to pieces (She wolf)

Where do I start? The past and the chase

News of tougher social restrictions in Germany and France has triggered a broad meltdown in risk assets with the market forced to reassess the prospect of the global economic recovery. The German DAX has led the decline in equity markets, the USD and JPY have benefited from a safe haven bid while commodity linked currencies have succumbed to the turn in sentiment. Core yields are little changed while oil prices have led the decline in commodities.

The acceleration of COVID-19 infections in Europe and the US has been a rising concerns for many weeks, but until yesterday the market was travelling with the hope the improvement of health care services in dealing with the pandemic would prevent the introduction of severe lockdowns.

At least in Europe, this dynamic has now changed with the rising in hospitalisation rates in Germany and France forcing politician to make a move.

The question now is whether US states will follow shortly given the spike in COVID-19 hospitalisations, especially in the Midwest.

German leaders agreed to impose a one-month partial lockdown from Monday that will see bars, restaurants and leisure facilities closed – while most other businesses continue operating – with advice to keep social contacts to an absolute minimum and avoid all non-essential travel.

French President Emmanuel Macron, confirmed media reports announcing the imposition of a new nationwide lockdown (starting Friday) less than a week after the country expanded a curfew to about two thirds of the population. Infections and hospitalisations are rising at such a pace that avoiding tighter measures was no longer possible.

The UK, Italy, Spain and Greece reported record daily increases in cases on Wednesday. New modelling by scientists employed by the UK government suggest England is likely to require the tightest restrictions by mid-December, with the current localised restrictions ineffective in containing the virus. So it seems fair to suggest tougher restriction are coming to the UK soon.

Yesterday’s media announcements of prospective lockdowns by Germany and France, sparked a turn in sentiment with the euro trading below 1.18 during our morning, but later in the day the opening of the European session triggered a broad meltdown with the German DAX leading the decline.

The Euro Stoxx 600 index closed down about 3%, with Germany’s DAX down over 4%. US equities gapped lower at the opened with the S&P 500 falling over 3% and never really recovered, closing the day at -3.53% .

On a day like today, the argument that core global bond yields have lost their safe haven appeal, given the current low yield environment and Central Bank interference is hard to contradict. However, options structures could be playing a role, specially bearing in mind risk events around the corner. The ECB meeting tonight, US election and FOMC next week.

Meanwhile in a more classical fashion

The USD and JPY have benefited from a safe haven bid with JPY the only G10 pair outperforming the USD (USD/JPY now trades at ¥1.0434, down 0,12% and technically looking with some room to trade lower). In index terms the USD is up around 0.5% in both DXY and BBDXY terms at 93.42 and 1166.96 respectively.

Commodity linked currencies are the big underperformers with NOK leading the declines, down just over 2%, not helped by the sharp decline in oil prices ( down 5%). Somewhat surprising CAD has done a bit better, only down 0.98% (@ 1.3297), so this time not massively affected by the fall in oil prices, although the BoC decision probably played a part too.

Overnight the BoC left rates unchanged at its effective lower bound ( 0.25%), but notably ahead of the RBA decision next week, the BoC “recalibrated” its bond purchases toward longer-dated bonds to aid more in lowering of household and business borrowing costs, also winding back its bond purchases to at least $C4bn/week. The Governing Council judged these bond purchase adjustments will provide as much stimulus as before.

The AUD was flying high, even when the Euro was heading lower as the market was assessing the lock down news. Close to the end of our day, the AUD traded to a high of 0.7157, but as equity markets began to collapse in Europe, true to its risk sensitivity, the AUD was unable to sustain its buoyancy, trading to an overnight  low of 0.7038 and now it opens the new day at 0.7042

In a similar fashion

The NZD has shown some reaction to the more cautious market tone that has been evident over recent days. From an overnight high of 0.6720, the currency lost almost a full cent, hitting a low of 0.6629, now currently around 0.6638.

EUR and GBP are mid-pack, down to 1.175i and 1.2986 respectively. With bigger macro factors in play overnight, GBP reacted little to positive news on trade talks.

Bloomberg reported that the EU and UK have made progress this week toward resolving some of the biggest disagreements, raising hope that a deal could be reached by early November. While differences were still said to be substantial, work had begun on writing the text for an agreement, seen to be a positive sign 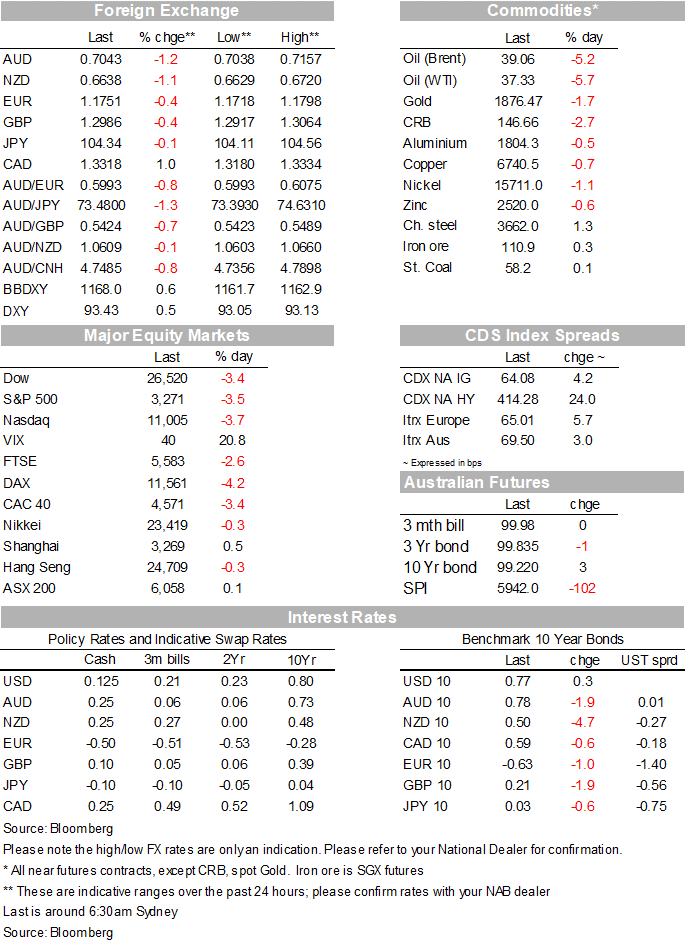 Strong management and a robust institutional framework are driving an optimistic outlook in the higher education sector for when international students return to campus life.

Markets continue to travel with optimism that Omicron will not have the severity of prior variants in terms of health outcomes, even if it is more transmissible.

Markets might be right on the interest rate outlook.

Positive Omicron reports coming from South Africa alongside an encouraging preliminary assessment from Dr Fauci over the weekend boosted sentiment with overnight news of policy easing in China, an additional bonus.