There were no big movements on US equities or bonds overnight, as markets wait to see what Jerome Powell has to say in his Congressional testimonies mid-week.

It was a quiet night overnight with markets largely treading water ahead of Wednesday’s Testimony by US Fed Chair Powell (10am Wednesday Washington; midnight AEST). Key focus will be on whether his interpretation of the mixed data to date leans towards a July rate cut – markets are still pricing the chance of more than a 25bp rate cut in July (1.1 cuts priced or 28bps), while 2.6 rate cuts are priced by the end of the year. Before that, today we get the Fed’s Bullard, Quarles and Bostic, while Powell is also giving opening remarks on stress tests (see Coming Up below for details). In terms of key moves overnight, yields were little changed with US 10yrs +1.4bps to 2.05%, while the USD (DXY) rose 0.2% with AUD -0.1% to 0.6971 and USD/YEN +0.3% to 108.79. Other major pairs were similarly little moved with EUR -0.1% to 1.1210 and NZD -0.1% to 0.6971.

The biggest mover overnight was the Turkish Lira, falling some 2% in reaction to President Erdogan’s firing of the Central Bank Governor on the weekend. In terms of justification, Erdogan said: “we told him many times to lower interest rates…he did not do what was necessary”. USD/TRY now trades at 5.74 (after having reaching 5.82), but still remains below its recent high of 7.24 reached back in August 2018. The other piece of geopolitical news were the results of the Greek elections, with victory for the centre-right New Democracy Party who campaigned on attracting investment and generating jobs. Debt investors liked the victory with Greek 10yr yields falling some -6.1bps to 2.04% – who would have thought just a few years ago that Greek debt would be trading close to 2%?

Stocks remain cautious with the S&P500 -0.4% and the tech heavy NASDAQ -0.8%. The fate of stocks will be closely linked to rates pricing with stocks having rallied strongly on aggressive Fed rate cut expectations. US earnings season is also a focus, with the season kicking off next week. So far 77% of 113 companies have revised their profit outlooks lower with consensus now looking for flat earnings growth for Q2. Under focus will be whether trade tensions are weighing further on profit growth and the latest news overnight news suggests there may be some headwinds – Apple’s iPhone sales fell sharply in India (iPhone shipments to India are down some 42% in the Jan-Mar period, and look to have declined in May and June according to Indian press).

There has been no further development on the US/China trade war. Trade tensions though appear to be spreading with Japan putting restrictions on companies exporting certain materials to South Korea that are used in the production of smartphones and memory chips.

In Europe, discussion continues on the timing of new ECB stimulus. Banque de France Governor Villeroy noted: “we have several Governing Councils in the next months” and that the ECB would not hesitate to act if needed (“there must be no doubt about our determination to act”). EUR though was little moved, with the debate on ECB easing more about when, not if.

Finally, for Australia Housing Indicators are continuing to show some tentative signs of stabilisation. Weekend auction clearance rates are likely to be above 60% for the fourth consecutive weak, while daily house prices have been flat since the 18 May elections, after around a year and a half of declines. In the past week, daily house prices were -0.1% in the 5 largest capital cities and are 0.0% since the May 18 election.

Datawise, a fairly light APAC session ahead. Australia has the NAB Business Survey for June and also the usual Weekly ANZ-Roy Morgan Consumer Confidence. For the NAB Business Survey, focus will on whether the lift in confidence last month is sustained, and whether that translated into better business conditions. Also under scrutiny will be the capacity utilisation series which has generally led the trend in the unemployment rate by around 6 months – this series has been pointing to a higher unemployment rate since late last year (see Chart below). Japan also has Labour Cash Earnings where consensus is for ‑0.6% y/y

Europe is also likely to be fairly quiet with only ECB speakers of note, here the ECB’s Lane will be speaking in a Twitter Q&A.

In the US central bank speakers are also likely to dominate. Bullard (voter) is giving welcoming remarks in St Louis (no Q&A), while Powell and Quarles are speaking on stress tests. It’s likely Bostic will have more scope to expand on monetary policy, he is doing an “armchair chat” at a Official Monetary and Financial Institution Forum Conference in St Louis. Datawise the US also gets JOLTS Job Openings and the NIFB – JOLTS likely more under focus given strong Payrolls on Friday jarred with the soft survey data seen over the past month. 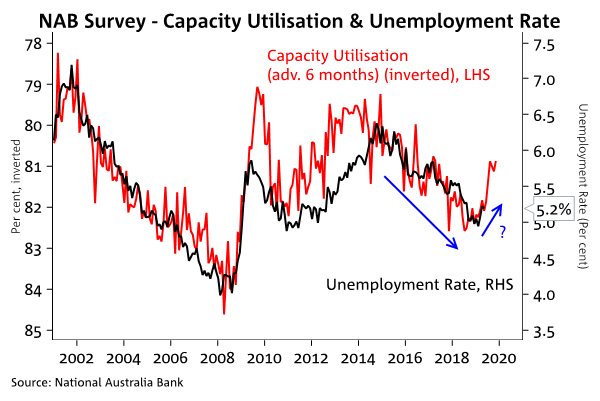 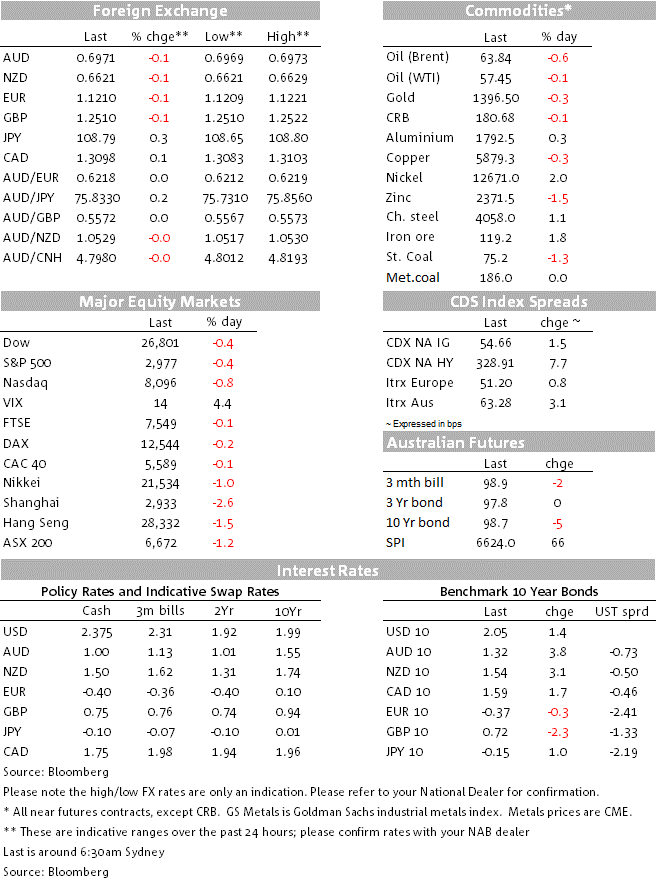