Equities and the US dollar have bounced back even if bond yields remain low.

Not so sleepy Joe Biden’s victories in most of the Super Tuesday state primaries offers an excuse to give a plug to Sharon Van Etten, who’s single Seventeen is one of my favourite songs of 2019. Comeback Kid’s not bad too. Biden’s performance has seen his odds of him securing the Democratic nomination come in to $1.20 and Bernie Sanders’ go out to $7 (according to Oddschecker).  Biden’s chances of being the next President have come in to $2.75 while Sanders’ have blown out to $13 (Donald Trump has gone out slightly, from $1.62 to $1.67). Health Care – a sector seen being decimated were Sanders to secure the Presidency – is the best performing sector of the S&P500, currently up 4.9%. More broadly, the flattening of the left tail risk represented by a Sanders Presidency is the main driver of the gains in US main board indices Wednesday, the S&P500 currently up 3.1% with half an hour of trade still to go.

Certainly the better showing of stocks has little to do with diminished concerns regarding the global economic impact of COVID-19, where the number of new cases being reported in various countries continues to rise sharply, albeit the latest – and prospective – monetary and fiscal policy response by government’s and central banks worldwide is providing something of a salve for risk markets. As out BNZ colleagues note, overnight a local emergency has been declared in the Los Angeles area after 6 new cases were discovered over the past 48 hours.  The total in the US is now 128.  The virus has now spread across most countries in Europe, with the UK seeing its confirmed cases jump from 51 to 85 yesterday.  There are reports that banks in the City of London are looking to shifting some staff to disaster recovery sites.  Meanwhile, the Italian government confirmed it would close schools nationwide until March 15.  On the economic impact, an internal EU briefing paper said that both Italy and France could experience a recession, which could potentially reawaken market concerns about Italy’s very high debt load.  The IMF joined the chorus of policymakers highlighting the risks of the global economy, saying the outlook had shifted to “more dire scenarios”.

And by way of an example of how ‘social distancing’ is already and will wreaking havoc on the services sectors of many economies in the months ahead, the makers of the new Bond movie have just announced a delay to the film’s release from April to November.  The world premiere had been scheduled to take place on 31 March at the Royal Albert Hall in London.  “Just one person, who may not even show symptoms, could infect the rest of the audience,” the producers say. “This is not the type of publicity that anyone wants.”

The Bank of Canada has been the latest cab of the rank with monetary policy easing, cutting its policy rate by a full 50bps (markets were divided on whether it would be 25bps or 50bps).  In making the announcement, BOC says that ‘While Canada’s economy has been operating close to potential with inflation on target, the COVID-19 virus is a material negative shock to the Canadian and global outlooks, and monetary and fiscal authorities are responding’.  Within G10 and just on the monetary policy side, attention will now turn to the ECB next week and Bank of England and RBNZ toward the end of the month (yesterday the RBNZ it would not be considering whether to ease policy before its next regularly scheduled meeting on 25 March, while incoming BoE Governor Andrew Bailey said the Bank needs more evidence before deciding on a move).

RBA Deputy Governor Guy Debelle was testifying to  Senate committee last night, where the key takeaways were that monetary policy is still seen to be working as it has before; that 0.25% is still seen to be the effective lower bound for the cash rate, any move down the QE path would be aimed at lowering the risk free rate (so buying government bonds, initially at least).  On GDP, Debelle suggest that the combined impact the hits to tourism and education rom COVID-19 will take about 0.5% off Q1 GDP (while noting the quarter has not yet ended) and which together with earlier estimated 0.2% hit from the bushfires, means 0.7% – and while he didn’t say so, patently means a high risk that Q1 GDP will be negative.

As for whether the Fed follows up this week’s 50-point cut with further action out of the March 17-18 meeting, James Bullard has been out warning market’s not to put weight on the March meeting, saying the Fed won’t have a lot more information at that meeting than it has today.  This has seen the March Fed Funds futures contract lose a basis point, but the 2 year Treasury yield is 7bps lower versus Tuesday’s New close. 10s are currently -1.5bps at 0.984% up from an overnight low of 0.93%.

Incoming economic news continue to be ignored by and large given it mostly predates the global spread of COVID-19.  For the record, the ISM non-manufacturing survey increased by more than expected, to an above-average 57.3 reading, while the ADP employment survey was strong (183k) but this has had an inconsistent relationship (month-to-month) with nonfarm payrolls.  On more relevance, the just-released Fed Beige Book, prepared for the March 17-18 FOMC meeting, reveals that the economic repercussions of the coronavirus outbreak weighed on U.S. businesses last month, with manufacturing industries particularly affected.  While economic activity was overall described as growing at a ‘modest to moderate’ rates, firms said they were worried the spread of the disease in China would hold up shipments and reduce Chinese demand for commodities. “Some supply chain delays were reported as a result of the coronavirus,” the report said. “Producers feared further disruptions in the coming weeks.”

The US dollar has recovered a little poise with the DXY index currently +0.19%, thanks to some slippage in the EUR ( a recent beneficiary of carry trade winds) CAD post the BOC’s 50-point rate cut and JPY.  The AUD, is the best performing G10 currency of the last 24 hours, benefiting more from the Fed’s 50 point rate cut on Monday than Tuesday’s 25 point RBA cut, and yesterday’s slightly better than feared Q4 GDP print of 0.5% plus an upward revision to Q3 to 0.6% from 0.4%, as outdated is this news is. Yesterday, we published a note reaffirming our forecast for AUD/USD rising to around 0.70 by the end of 2020, contingent on some dissipation of current CIVID-19 concerns, further USD weakness and the RBA refraining from going down the QE road.

As a keen fly fisherman, this story has me thinking I should shift my focus from attempts – often unsuccessful – to hook wily old brown trout out from New Zealand’s river systems.

Australia has January trade data.  The trade surplus is forecast to have shrunk by $0.6b to $4.6b in January (mkt: $4.8b). Our model of exports – based on commodity prices and ports data – suggests a $350m fall in exports in the month. Incorporating some downside risk to service exports from coronavirus and a pull-back in non-monetary gold after last month’s spike, we expect a larger pull back in the overall trade balance.

We’ll also take some notice of weekly Japan MoF data on capital flows in an out of Japan for the week ended February 28 – specifically whether there was a bigger exodus from overseas stock markets than the net ¥279bn during the prior week.

Offshore this evening, we have just weekly US jobless claims and Factory Goods Orders (the latter containing final Durable Goods Orders for January). 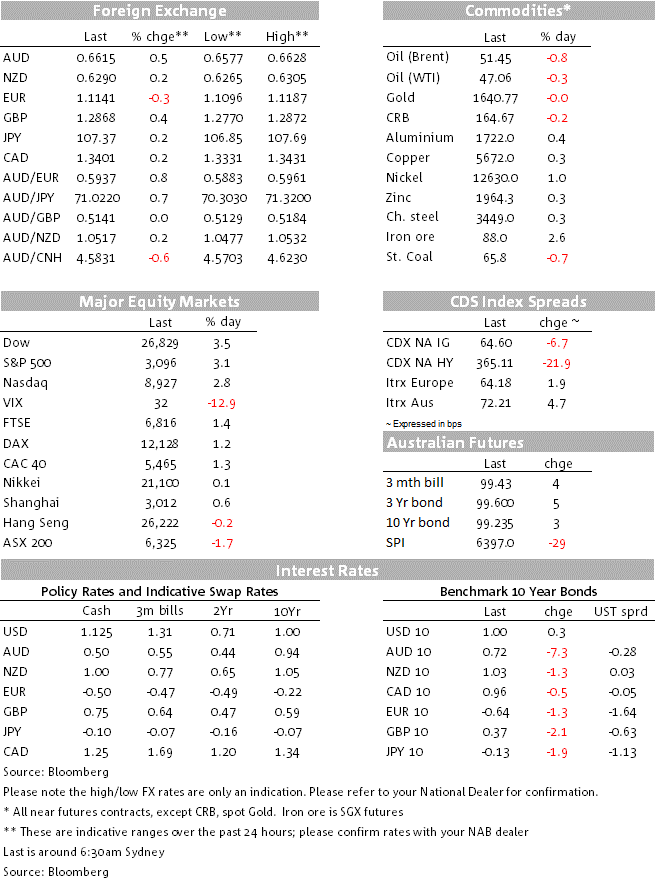