Markets Today: May presents cake as US wage growth crumbles

Theresa May has presented her Brexit strategy with the full support of her cabinet, apparently.

So after months of the EU imploring UK Prime Minister Theresa May to, “Tell me what you want, what you really, really want”, on Friday she finally gave a response. This following an all-day meeting at her country retreat in which she faced down the ‘Brexiteers’ in her cabinet, reportedly under pain of being sacked if they dissented and having to call a local mini-cab to take them back from Chequers.

Confirmation that the Government seeks a ‘soft Brexit’, at least with respect to goods and agriculture, so remaining in the single market for these sectors and some form of Customs Union, was greeted mildly positively in New York. Sterling added about 0.2% to gains seen earlier in the session in conjunction with an across-the-board sell-off in the USD in the wake of The June US payrolls report (more below).  This morning has Sterling add another 0.25% or so to Friday’s New York closing level, AUD/GBP down to around 0.5580 from above 0.56 on Friday.

The most obvious criticisms of the government proposals, as far as the likely EU response is concerned, are that they do not immediately endorse the principle of free movement of people endemic to the EU single market, and that they draw a clear distinction between good and services.  The status of the latter – representing 80% of the UK economy – are yet to be determined. This is at a time when the EU has grown increasingly wary of distinguishing different sectors such is the interconnection of goods and services sectors. Think of a UK truck driver – living in the services sector – delivering a consignment of goods to France.  The UK can – and doubtless will – therefore be accused of cherry picking.

That said, the UK has finally laid out a position and the ‘Hard Brexiteers’ have been quietened for now at least. So far this morning, we’ve heard from the Irish and Austrian Prime Ministers, who have said that while they have concerns about the British proposals, negotiators could be more optimistic than they were a week ago.  Of course, when England beat either France or Belgium on Sunday, that position could quickly change.

For broader markets, a slightly bigger than expected rise in US non-farm payrolls on Friday (213k) as well as upward revisions to the prior two months (by 37k) was no match for slightly softer than expected average hourly earnings growth (0.2% for an unchanged 2.7% yr/yr) and a 0.2% rise in the unemployment rate to 4%, albeit the latter was driven by a 0.2% rise in the participation rate.

As a result, stocks rallied, bond yields fell and the US dollar was universally weaker, DXY by 0.5% and the broader BBDXY by 0.4%.  NZD (+0.63%) and AUD (+0.57%) were the best performing G10 currencies over the 24 hours from Thursday’s NY close, having already enjoyed a small ‘buy the fact’ response to the earlier confirmation of US tariffs on $34bn of Chinese imports going into effect (and subsequently matched by equivalent Chinese tariffs on US goods).  The return of some semblance of stability to the Chinese Yuan and steadier Emerging Markets FX in general, is the real story here, after several weeks during which AUD in particular has moved (down) in lockstep with the CNY and broader EM FX sell-offs.

CAD slightly underperformed other commodity-linked currencies on Friday, even though the net result of Canada’s own labour market data (employment +31.8k, unemployment +0.2% to 6.0%) was to see market-implied odds on the Bank of Canada lifting rates by 0.25% on Wednesday lift from 81% to 87%.

The NASDAQ was Friday’s best performing global stock index and is also strongest on the week with a 2.4% gain, in stark contrast to losses of more than 2% for both the Nikkei and Shanghai.  In bonds, Treasury yields were +/- 1bps lower across the curve with the 2/10s spread half a basis point steeper on the day but still 4.7bps flatter on the week to 28.5bps.

In commodities, contrasting fortunes with WTI oil up but Brent down, and industrial metals, gold and coal all down (bar zinc). On the week, coal (both steaming at coking) has maintained its advance, gold is little changed but base metals are all down with the LMEX index losing another 4.5% to now be 12.7% off its early-June highs and to its lowest reading since mid-August 2017.

It’s a relatively quiet week as far as set-piece data and events go (US CPI Thursday, Bank of Canada Wednesday and locally, the NAB business survey tomorrow, among the highlights).

The UK Brexit White paper is now expected on Thursday, but any formal EU response might not come until after the summer breaks across Europe

How US President Trump responds to China immediately imposing tit-for-tat tariffs on a range of US exports to China, will be important.  There’s a good chance he’ll instruct the US Trade Representative to start compiling a list of $200bn of Chinese imports on which 10% tariffs could be imposed. 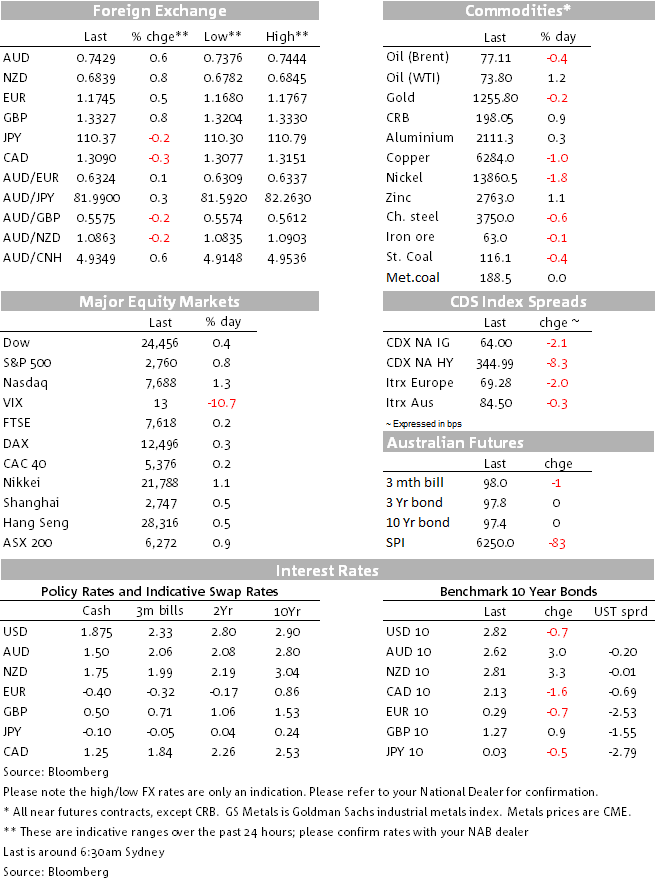