Overview: Everybody else is doing it, so why can’t we?

Everybody Else Is Doing it, So Why Can’t We? was the 1993 debut album from the Cranberries, fronted by the late great Dolores O’Riorden. Its most popular track, Linger, might have been being sung in the portals of Martin Place on Tuesday prior to the RBA’s announcement of another $100bn worth of QE (“Do you have to, do you have to, do you have to let it linger?”).  Yet notwithstanding deputy Governor Guy Debelle’s renowned singing prowess, we bet it wouldn’t have been a patch on the original.

In yesterday’s speech and Q&A by the RBA Governor

Dr. Lowe made clear the decision to extend the existing $100bn QE bond buying programme by a further $100bn and to continue buying government and semi-government bonds at the same $5bn per week rate as now, was because (1) it has lowered rates and the AUD is “lower than it otherwise would have been”; (2) other central banks are continuing QE; and (3) inflation and jobs are short of goals.

On what to do about the current 3-year yield YCC

Lowe said that the Board “will need to consider” whether to switch to target the Nov-24 bond (from the current April 2-24) depending on “flow of economic data and the outlooks for inflation and jobs.

Follow-through impact on the AUD from Lowe’s speech, after Tuesday’s immediate hit on the $100bn additional QE announcement, was limited by the support drawn from the sharp rise in the NZD following the stunning Q4 NZ labour market report, revealing a drop in the jobless rate 4.9% from 5.3% in Q3 and 5.6% expected.

Together with the Q4 Labour Cost Index of 0.5% on the quarter, on the surface the RBNZ has met its mandate in sharp contrast to the RBA (remember its inflation target is centred on 2%, versus 2.5% for the RBA).

Following the labour market data, our BNZ colleagues have tentatively tabled a first RBNZ rate rise for May 2022.

In looking at the limited follow-through reaction on the AUD (as well as in the rates market) we would note that the impact on the currency of what are relatively small changes in the Australia versus US interest rate structure as a result of QE and YCC, are small beer compared to the influence of commodity prices.

So yes, the AUD is, and will be, lower than otherwise had the RBA not been doing what it is, but we are probably talking les than a cent in terms of what it means for NAB FX Strategy team’s AUD/USD fair value models.

AUD is, alongside the NOK – latter supported by further gains in oil prices and where the global reflation theme seems to be back in the ascendancy – the best performing G10 currency, up 0.2% to around 0.7620.

The NZ is flat to its prior NY close.

Elsewhere the EUR, CHF, and GBP are all a little lower to NY close, to leave overall USD indices very marginally firmer.

One surprise perhaps is that the EUR has not done better, following the announcement that former ECB President Mario Draghi has accepted the invitation to try and form a new Italian government coalition.

The potentially positive economic implications of this, in particular with respect to perhaps the best prospect of meaningful structural reform in Italy for decades, has not been lost on either the Italian stock market (up over 2%) or the bond market where the 10-year BTP-Bund spread is down 9bps on Tuesday.

Seeing is believing of course, and we don’t yet know whether Draghi will succeed in forming a government, so for now, EUR/USD continues to be held in check by the relative superiority of incoming US versus Eurozone economic data and the much slower roll-out, to date, of covid vaccinations in the EU relative to the US.

On the data front

We had positive surprises from both the US services ISM and ADP employment, the former up to 58.7 from 57.7 and against a fall of 56.7 expected, and the latter 174k against the 70k consensus, so holding out a reasonably prospect of a rise in employment come Friday’s non-farm payroll numbers.

The gain in the ISM was led by a 6.5 point jump in the employment component, a curious result given what we know from things like weekly jobless claims – and a 3.1 point rise in new orders.

Prices paid, a series that correlates well with the Fed’s preferred core PCE inflation measure, was flat on the month.

Overall the data suggest the US is weathering its 3rd  COVID wave very much better than the first or second.

Eurozone core CPI inflation came in at 1.4% from 0.2% in January and well above the 0.9% expected, though (inherently temporary) base effects and the impact of the reversal of the temporary German VAT cut, look to have been underestimated by economists.

US equities are coming into the last hour showing modest gains (indices up 0.25-0.5%) with very mixed sector performance within the S&P 500 (5 up, 5 down and 1 unchanged).  Energy stocks, up 4.7%, on higher oil prices, are leading the gains.

Yesterday, despite all the RBA related commentary from Governor Lowe, 10-yr futures traded a relatively narrow 98.805 to 98.825 range, the implied yield settling at 1.185%. 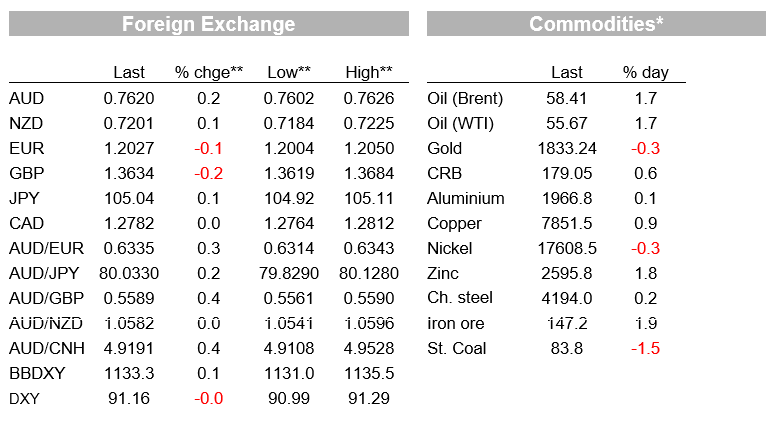 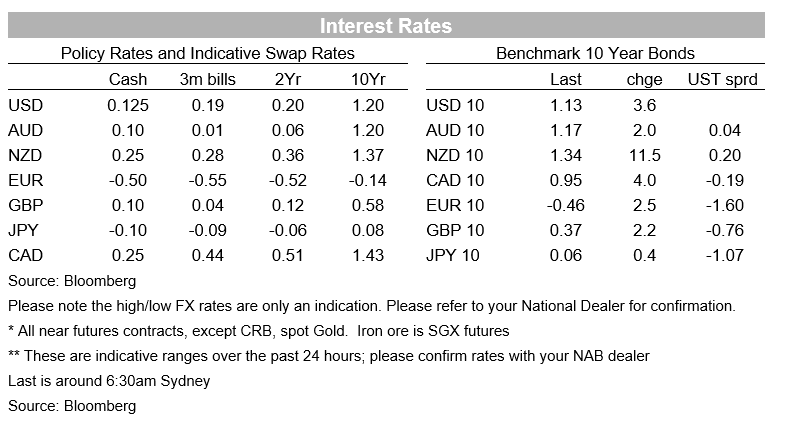