There has been a massive fall in oil prices.

How does it feel to treat me like you do? – New Order

Oh, what a night!

The collapse in oil prices and associated credit concerns for producers has added another negative layer to a market already on its knees  over the COVID-19 outbreak. Russia and Saudi Arabia’s pledge to flood the market with cheap oil triggered a sharp decline in oil prices during yesterday’s APAC session, triggering a huge sell-off in energy shares overnight with main European and US equity indices down between 6% and 8%. 10y UST yields have settled around 0.55% after trading to a low of 0.32% during APAC and the USD is broadly weaker although oil linked currencies have underperformed. NZD and AUD recoup yesterday’s flash crash losses and JPY retains its preeminent safe-haven status.

The oil price war triggered after the collapse in OPEC+ alliance on Friday has spooked the market with investors turning their attention to the viability of all producing companies. These concerns have also been exacerbated by comments from the International Energy Agency noting that all of the annual growth anticipated last month — just over 800k barrels a day — has been wiped out and oil demand is now expected to contract by 90,k barrels a day. Oil prices collapsed around 30% at the Asian open yesterday with WTI trading to a low of $27.38 while Brent  fell to a low of $31.25. Brent crude is trading this morning around $34.40 per barrel (down 24% for the session) and WTI is at $30.80 (down 25%).

A decline oil prices means that from an importer (winner) and exporter ( loser) perspective you have winners and losers, but the current focus for markets is on the producers with the collapse in oil prices exposing the US shale industry in particular. The US energy High Yield sector has led the widening in credit spreads including high grade credit. The Market CDX North American Investment Grade Index jumped 45bps to 130bps in early NY trading, the biggest increase since the height of the credit crisis in September 2008.The index now trades at 115, the CDX NA High Yield now trades at spread of 559 (a month ago it was around 225) and Europe’s XOver index closed at 467 ( a month ago it was around 213).

The US S&P500 slumped by 7% in early trading, triggering an automatic 15 minute trading halt. The index now trades at -7.60% with its energy sub-sector down 20.08% as I type. Main European indices closed with declines ranging between  6% to 9% with energy shares leading the declines. The STX Europe 600 energy sub index closed at -17.63%.

The flight to safety and panic in markets has seen the US 10-year rate trade to a  low as 0.31% during the Asia type, but there has been a bit al calmness during the overnight session UST yields initially settling down and more recently climbing higher. Yesterday the 2y note traded to a low of 0.2491%, but as I type it now trades at 0.4027%, similarly yesterday the 10y Note traded down to a low of 0.33% and now it trades around 0.57%.. The Fed Funds market is pricing in about 71bps of rate cuts by the time of the Fed meeting next week and the rate falling to about 15bps by year-end. Germany’s 10-year rate fell 15bps to a record low of minus 0.86%. The 10-year rate for the troubled peripheral euro area countries was higher across the board, with Italy up 35bps to 1.42%.

The big news over the past 24 hours was yesterday’s flash crash during our afternoon session. Intense JPY cross rate moves look to have been the trigger for multiple mid-session ‘flash crashes’ (Japan retail FX flow suspected but not proven) which saw AUD down 5% at one point ( to a low of 0.6313), NZD down to 0.6014, USD/ZAR up 6% and USD/MXN up 9%.  All these pairs have recovered all if not most of their losses suggesting this was indeed a flash crash (or in case of JPY melt up) event, we suspect the plunging oil prices provided the catalyst for levels where stops would have started to be trigged.

Of note however, while both antipodean currencies have made strong gains overnight with the NZD up ~1.7% to 0.6340 and the AUD up ~1.2% to 0.6587. For now the repricing of US yields is a downward force on the USD, we think this will eventually play its course and with the global downturn tacking a turn for the worse we still think the AUD and NZD look vulnerable to further declines, specially via the likely decline in their respective terms of trade.

JPY has managed to retained about half of its initial gains against the USD. Yesterday pair fell from around ¥105 to a low of ¥101.57 during Asian trading time, but then overnight it traded down to a low of ¥101.19 before recovering to ¥102.31 where it currently trades, as we have been saying for quite some time, JPY remains the pre-eminent safe-haven currency.

As markets have become more volatile talk of coordinated fiscal and monetary support are getting louder. Overnight we had reports that the White House is trying to put together an economic package that might include temporary expansion of paid sick leave, and a menu of policy options including tax relief and cashflow injections to help companies facing disruption from COVID-19. A joint action expected by the Bank of England and UK Treasury on Wednesday, but on the other extreme little confidence has been provided by EU leaders, with talk of discussing the impact of COVID-19 at the next summit on 26 March, far too late for action as far as markets are concerned.

The number of cases in Italy have continued to soared, up about 25%, cases in Spain have almost double and more cases have been reported in the US. The World Health Organization said the threat of a pandemic is “very real.”. So unfortunately in addition to oil price war ramifications, COVID-19 remains a growing concern. 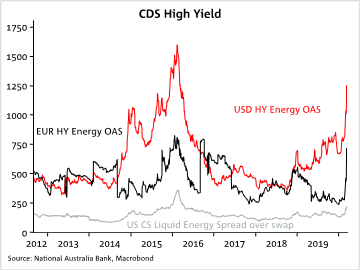 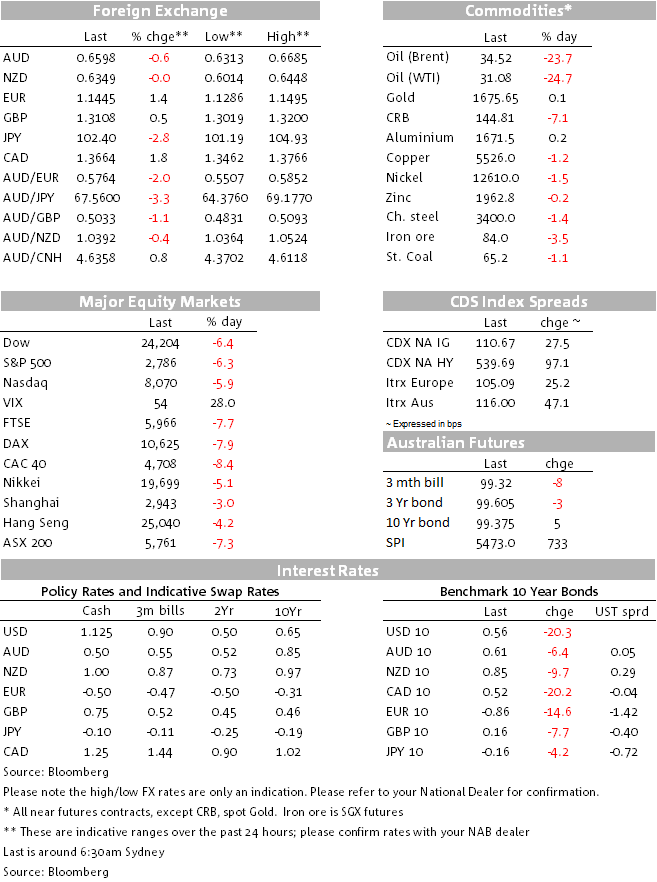