WTI lurched into negative territory with a vengeance.

If nothing else, the spectacle of oil prices deep into negative territory – minus $40 in fact for the about to expire May WTI futures contract – allows me to dust off one of my favourite Elis Costello tracks by way of a title for today’s missive. The impact of the fall has been relatively muted in other asset markets, with US stock indices finishing  +/- 2%, US bond yields only a couple of basis points lower and only the NOK and CAD taking much of a hit in FX markets. The USD is about 0.4% stronger overall since last Friday’s close and AUD/USD about 0.4% lower.

Having ended last week near $18 a barrel, the US West Texas Intermediate (WTI) benchmark fell below $0 Monday, the May futures contract trading to as low as -$40 per barrel, meaning sellers were willing to pay buyers to take oil off their hands. How come?  Well for sellers of oil, its expensive to shut down wells, oil pipelines and storage facilities are filling up towards capacity, plus there are costs and practical difficulties with transporting oil from inland hubs to ships on the coast which offer (increasingly expensive) floating storage. Tonight’s expiry of the May futures contract is believed to have heavily contributed to the fall in prices. Since WTI futures are deliverable, that those who own the contract need to have a place to store the oil. The scramble therefore has been to either roll the contract forward to June (where prices are still above $20) or close out altogether. Brent crude, where the May contract has already settled, is much less impacted by the goings on in WTI, down some 7% or $2 to around $26.

The ‘hope’ here, for those buying or holding June WTI oil contracts at $20 or more, is that by then the combination of the just-agreed OPEC++ production cuts will be in effect at the same time that relaxation of some social distancing rules in various countries will have seen an improvement in the demand side of the oil price equation. Seeing is believing. Other commodities, incidentally, have been little impacted by the WTI oil price moves, the LMEX index of industrial metals closing in London virtually unchanged. One asset class where the oil move has shown up is high yield credit, where for example the high yield CDS index is 50bp higher at 640bps.

US Treasury bond yields are slightly lower, 10s currently -2.7bps at 0.617% while the 2-year note is unchanged. A bigger moves is evident a,  have barely moved despite the carnage in the oil market.  The 10-year Treasury yield is 2bp lower, at 0.62% currently.  Market-implied US inflation expectations have seen a bigger fall linked to oil, the 10-year ‘breakeven’ inflation’ rate down 6bps, to 0.96% but still well up on its sub-0.5% mid-March low.

The oil-sensitive CAD and NOK have extended losses in the last hour or so, currently -1.0% and -1.2% on the day respectively. The USD is overall stronger against all currencies bar NZD, the BBDXY index +0.4%, matching a 0.4% fall in AUD/USD.

The NZD benefited yesterday from PM Arden’s announcement that NZ will reduce its Covid-19 containment status from Level 4 to Level 3 in light of the fact that there appears to be no (or very low) community transmission here. However, the alert level will not change until April 27 leaving New Zealand in lockdown for another week yet. Our BNZ colleagues’ back of the envelope calculations indicate that around 500,000 people, will, at least theoretically, be able to go back to work under Level 3, including those in construction, manufacturing, forestry and distribution.  It appears there will be two weeks in Level 3 before consideration is given to moving to Level 2. Level 2 would mean a more substantial opening up of the economy.

There has been more encouraging data on infection rates in Europe and the US. Italy reported its fewest new cases since March 10th (and according to the BBC, an absolute reduction in the current number of infections) while the UK reported its lowest daily death toll since April 6.  New York recorded its sixth day in a row of declining deaths Overnight, Germany allowed small shops to open and said schools should reopen in early May.  The race to find an effective treatment for Covid-19 continues apace too. After last Friday’s excitement over reports that Gilead’s Remdesivir drug had shown good results aiding infected people in Chicago, Swiss pharmaceutical firm Novartis said it would run trials on malaria drug hydroxychloroquine, which Trump has been championing as a possible treatment.

Australia local media, as of an hour ago, reported that Virgin Australia is about to go into voluntary administration, having failed to secure bail-out funding. If so, would be the first major COVID-19 related corporate failure in Australia. Virgin Australia employs about 10,000 people directly and, it is reckoned, some 6,000 indirectly.  The BBC is noting that Richard Branson, a minority shareholder in both Virgin Atlantic and Virgin Australia, is offering up his Caribbean island, Necker, as collateral against government bailout loans, but no word as yet on whether this may yet save the Australian entity from imminent collapse.

The fate of Virgin Australia will clearly be a headline grabber today, but the other main event should be a broadcast speech from RBA Governor Phil Lowe at 15:00 AET, where if his Four Corners appearance last night is anything to go by, should reiterate the message that government debt is a good thing at the moment and that the there has never been a better time for them to borrow. RBA Minutes of the April meeting this morning shouldn’t be market moving. 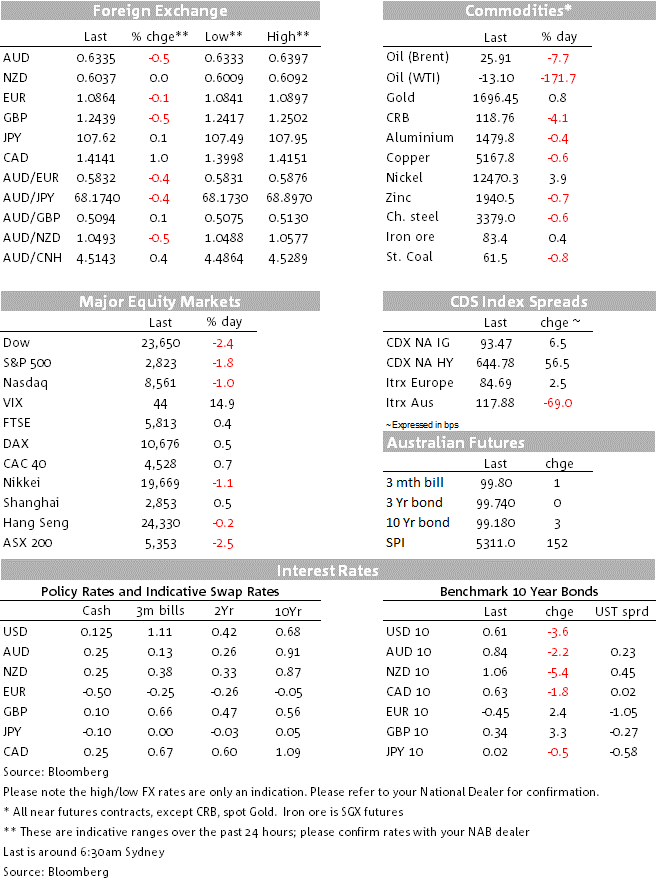