News of President Trump threatening sanctions on Germany had an immediate impact on the Euro.

Overview: Could do better

The two main economic events since Australia went home yesterday have been US CPI, which undershot expectations in core terms and a speech from the RBA’s Luci Ellis on “Watching the Invisibles’ in which she makes clear the RBA now pegs NAIRU at 4.5% with risk it could be lower, making clear this was a prime motivation behind this month’s Cash Rate cut.  The AUD added to its APAC session losses post-Ellis (low of 0.6925) though in truth this is more to do with USD gains than fresh outright AUD weakness.

US headline CPI came in at 0.2% m/m as expected to push the annual rate down to 1.8% from 2.0%, while the core (ex food and energy) measure rose by just 0.1% from 0.2%, pulling the year-on-year rated own to 2.0% from 2.1%.  As has been the case in each of the past few months, falls in used car prices (-1.4% m/m) were largely responsible for the downside miss. There was also a less strong rise in the heavily-weighted shelter category relative to recent months. Those wanting to claim core inflation isn’t really falling are pointing to the fact ‘core CPI ex-used car prices, rounded to one decimal place’ are running at a consistent 0.2% in recent months.  Hmm.

The CPI data didn’t go unnoticed in US rates markets, the money market now pricing a 92% chance of a Fed rate cut in July (based on a current Effective Fed Funds rate of 2.37%) from 88% the day before. The US Treasury curve has bull-steepened, 2s down by 4.9bps to 1.881% and 10s down a lesser 2.3bps to 2.12%, while the 30-year is virtually unchanged. Key to validating Fed rate cut pricing out of next week’s FOMC will be whether it drops reference to be being “patient” with interest rates. Chances are they will.

US equity indices are ending the US session lower by between 0.2% (DJIA and S&P 500) and 0.4% (NASDAQ).  It’s hard to say whether this is just some profit-taking after the strong run up in June to date or deepening concerns that this month’s Osaka G20 meeting, even if Presidents Trump and Xi do meet there, is not going to yield much by way of de-escalation of trade tensions. Certainly increased confidence in early Fed rate cut(s) didn’t offer much by way of support to risk assets last night.

The big losing sectors last night were financials (lower Fed rates not seen as positive for profitability) IT (trade concerns presumably) and energy, the latter off by 1.44% after the weekly DOE report revealed a surprise increase in crude oil inventories for the second week running, pulling WTI crude down $3.5, so back testing its lowest levels since January.  Other commodities are mixed, with base metals mostly lower but not aluminium (+0.6%) or iron ore, where futures prices are up another 0.2%.

In currencies, USD strength is superficially puzzling given the renewed decline in US yields and which have been a major driver of USD slippage in recent weeks, and with still no sign of safe-haven support (the VIX is actually down slightly o/n despite the falls in stock prices).  Rather, a drop in the Euro is a big part of the story, falling back below 1.13 after President Trump threatened to impose sanctions if Germany went ahead with the Nord Stream 2 gas pipeline from Russia. Also supporting USD indices has been a fall in GBP (-0.3%) after parliament rejected Labour’s cross-party motion intended to prevent a no-deal Brexit (by 308 to 298).

AUD/USD is actually the weakest G10 currency pair of the past 24 hours, off 0.5% to a low of 0.6925.  The Aussie flat-lined near 0.6950 out of the RBA’s Ellis speech (see below) then fell away alongside generalised USD strengthening in the New York afternoon session. The labour market data should be key today’s price action. (see Coming Up).

Finally, RBA Assistant Governor Luci Ellis spoke on “Watching the invisibles” last night, focusing on the NAIRU. She said the RBA’s updated work on the NAIRU suggests it had declined from around 5% a year ago to 4.5% now, something Governor Lowe mentioned in his February testimony. Ellis said there is still considerable uncertainty around this estimate where the 95% confidence interval ranges between 3.5 to 5.5%, although she added “given what [the RBA is] seeing in the data, right now we feel comfortable about being a bit more specific than that”.

The analysis also shows that the NAIRU has been revised much lower in history, with the estimated NAIRU now declining below 5% earlier this decade.  In noting that a tighter labour market can reduce structural unemployment as the long-term unemployed are “given a go”, she argued that the “single most effective policy would be to run the labour market a bit tighter so that there are more jobs to be filled”.  She also said she “couldn’t rule out” that we could “look back in a few years and realise the NAIRU is even lower than we thought today” and if “that turns out to be the case [it] would be an excellent outcome”.

For policy, the lower NAIRU meant that “it has become apparent that the unemployment rate that Australia can feasibly sustain is lower than it has been in at least the past 40 years [which] is great news”.  In addition to low and stable inflation, full employment is part of the Reserve Bank’s mandate and “if it turns out that full employment is even ‘fuller’ than we thought, getting there would be a real contribution to our third mandate, the economic prosperity and welfare of the Australian people”. She concluded that “if Australia truly can have lower unemployment – sustainably – policy should be used to try to get there”, which was “one important consideration motivating the Board’s recent decision to lower the cash rate”.

Today’s May labour market data are key for FX and rates markets today given the RBA’s repeated emphasis on the importance of the unemployment rate for near-term policy. NAB is forecasting a strong report given the employment boost from temporary workers hired to run the federal election. We expect employment grew by 40k (mkt. 16k) and the unemployment rate ticked down to 5.1% in May (mkt. 5.1%). If we are wrong and unemployment increases again – or even if doesn’t fall – then markets should price in heightened risk of a July follow-up to this month’s rate cut – rather than August as now.

That said and as one of our interest rate traders quipped last night post-Ellis, “We are all focused on a 5.1 or 5.2 outcome and what that means for pricing. 4.5 makes that all irrelevant. Everything above 4.5% is bad”.  As such, there is an argument that a July rate cut is under-priced by the market (currently put at 55%).

There’s not much of note offshore this evening. Fed officials are now inside the pre-FOMC cone of silence, while the data calendar sees only final German CPI, EZ industrial production, and US weekly jobless claims.  The Swiss National Bank meets. Policy should be unchanged, the -0.75% Libor target rate range floor remains the lowest policy rate in the world – but in light of recent renewed currency appreciation on safe have (trade-tension related) considerations and CPI forecast likely to be further downgraded, markets are now flirting with the notion of a further reduction to the floor of the Libor target range, to at least -1%, if not as early as today. 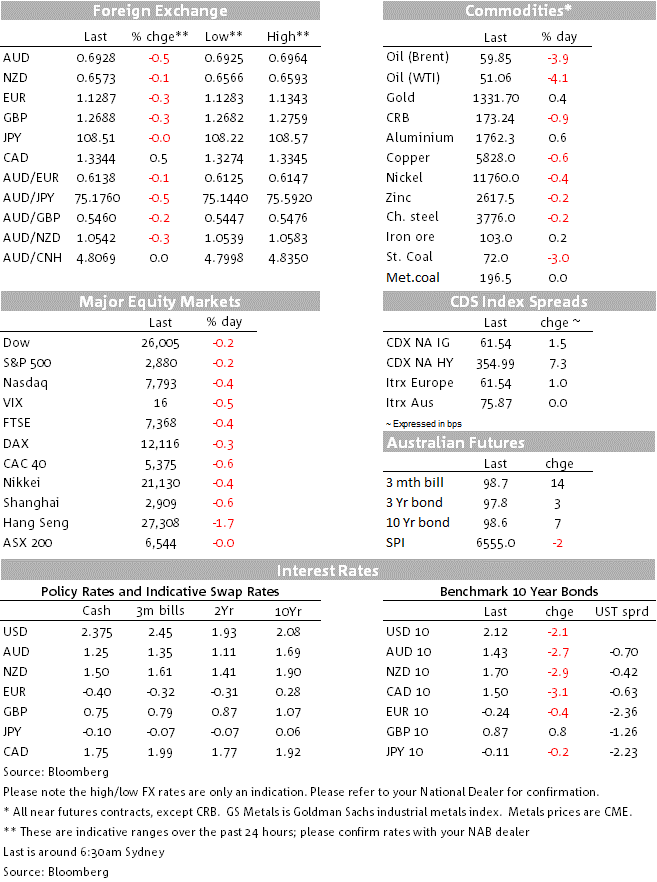