The pound lost further ground today as the EU objected to a new government bill that would unilaterally overturn the Withdrawal Agreement.

Tumble drain it made my day, The heaven screams their final raise..

The undercurrents always there, Our hopes are hard to bare – Maximo

It seems that the undercurrents that have been simmering in the background are now competing for some of the spotlight. Ahead of the US election we have been highlighting the potential for markets to become unsettled over September and October with many known unknowns entering crucial stages. Brexit is back in focus with the EU issuing an ultimatum to the UK over its Internal Market Bill intentions, hopes of a new US fiscal stimulus have faded even more alongside an uptick in jobless claims meanwhile the EU has surpassed the US in new COVID-19 cases. All of this against a backdrop of elevated equity prices.

European and US equity markets are a sea of red

Tech shares have led the declines with US equities essentially reversing yesterday’s gains. GBP has been pounded by the EU trade news, EUR gives back ECB gains and the broad risk off environment has boosted the USD and flattened the UST curve. After initially trading higher AUD and NZD have succumbed to the turn in sentiment.

But in the end Brexit developments stole the spotlight, adding further uncertainty to an already fragile sentiment in markets. After an encouraging opening session with S&P 500 up around 1%, US equity markets made a big U turn and have ended the sharply lower.

The NASDAQ has led the declines, down almost 2% while the S&P 500 fell -1.76%, meanwhile European equity declines have been relatively modest with the Stoxx Europe 600 Index closing 0.6% lower. Essentially saved by the bell, rather than reflecting any fundamental reason.

We don’t think there has been one catalyst responsible for the turn in sentiment.  The ECB meeting took place before the Brexit headlines hit the screens.  The ECB kept all its policy settings unchanged, including its deposit rate at -0.5% and its asset purchase programmes.  The ECB upgraded its growth forecasts for this year (growth of -8% compared to -8.7% previously) and inflation forecast for next year (1% vs. 0.8% previously).

All more or less in line with expectations, but on a positive note ECB President Lagarde noted in her press conference that the latest projections don’t include the full effect of the European Union’s 750 billion-euro ($891 billion) recovery fund, and that will “clearly have an impact”. The ECB remains committed to sustaining an easy policy stance into mid 2021 (and full use of the €1.35 Pandemic Emergency Purchase Program), but given their own forecast on inflation, most analysts expect more bond buying to be announced in due course.

As for the euro

The ECB noted that In the current environment of elevated uncertainty, the Governing Council will carefully assess incoming information, including developments in the exchange rate, with regard to its implications for the medium-term inflation outlook,” . In the Q&A, Lagarde took plenty of questions on the exchange rate and though her comments varied from “carefully assessing” to “extensively monitoring”, the read-through is the ECB is not going to overreact to the EUR’s moves; at least not at this stage. The EUR traded as much as 1% higher, to almost 1.1920, during Lagarde’s press conference but the subsequent Brexit-induced uncertainty and US tech led souring in equity sentiment  has resulted in the euro giving back all of this gains as the USD regains a safe haven bid. Euro now trades at 1.1814, essentially unchanged over the past 24 hours.

EU chief negotiator Michel Barnier has effectively call BOJO’s bluff . Following the UK’s move to published a bill to rewrite parts of the withdrawal agreement it signed in January, the EU issued an ultimatum effectively demanding that the UK government withdraws the controversial bill by the end of the month or face legal action. The European Commission said the UK had “seriously damaged trust” and risked jeopardising trade talks.  Cabinet minister Michael Gove said the UK had no intention of backing down however, saying he had made it “perfectly clear” to his EC counterpart that the UK government “could not, and would not” change the bill.

Today’s Bloomberg quote from George Ade seem pretty timely “Nothing is improbable until it moves into past tense”, thus we have Brexit back on the cards and GBP has been duly pounded. Cable fell as much as 1.7% overnight, from 1.30 to around 1.2780.  It has recovered slightly, to 1.2802, but remains the standout mover in currency markets (-1.72%).  The market is now pricing around 20bps of rate cuts by the Bank of England over the coming 12 months, to around -0.1%.

The falls in equity markets and broader risk-off sentiment have boosted the USD, with the Bloomberg DXY swinging from a 0.5% decline to a 0.2% gain.  In a mirror image and true to their risk aversion disposition, the AUD and NZD came under pressure after trading higher early in the session. The AUD traded to n overnight a high of 0.7325, but now opens the new day at 0.7258. Similarly NZD reached a high of 0.6709 and now trades at 0.6651.

US Treasury yields have fallen in sympathy with equity markets overnight, although the 10-year rate is close to where it was when Sydney was thinking about calling it a day. The yield on the German 10-year bond future has given back its modest rise after the ECB meeting (consistent with a 10-year bund yield of around -0.46%).

US data was not market moving

But the depicted a worrying development in the US labour market against a backdrop of fading hopes over a new round of fiscal stimulus. Initial claims were unchanged at 884K, above the consensus, 850K, but continuing claims rose to 13,385K from 13,292K, also above the consensus, 12,904K. So this means the pace of US gross job losses appears to be rising, suggesting that some firms that had attempted to hold on to employees over the first six months of the COVID-19 crisis are now beginning to lay them off.

The need for more fiscal support seems obvious, but the chances of imminent support have diminished significantly, overnight the US Senate voted 52-47 to advance to the floor a bill introduced by Senate Majority Leader Mitch McConnell. This was expected, but with talks or bill proposal on the table, it is looking more likely that there will be no further stimulus before the November election.

Another development that keeps simmering in the background , Bloomberg notes that Europe has now surpassed the US in new virus cases. The 27 countries in the European Union plus the U.K., Norway, Iceland and Liechtenstein recorded 27,233 new cases on Wednesday, compared with 26,015 for the US. That follows several weeks of resurgent infections in Spain, France and other countries across the continent. 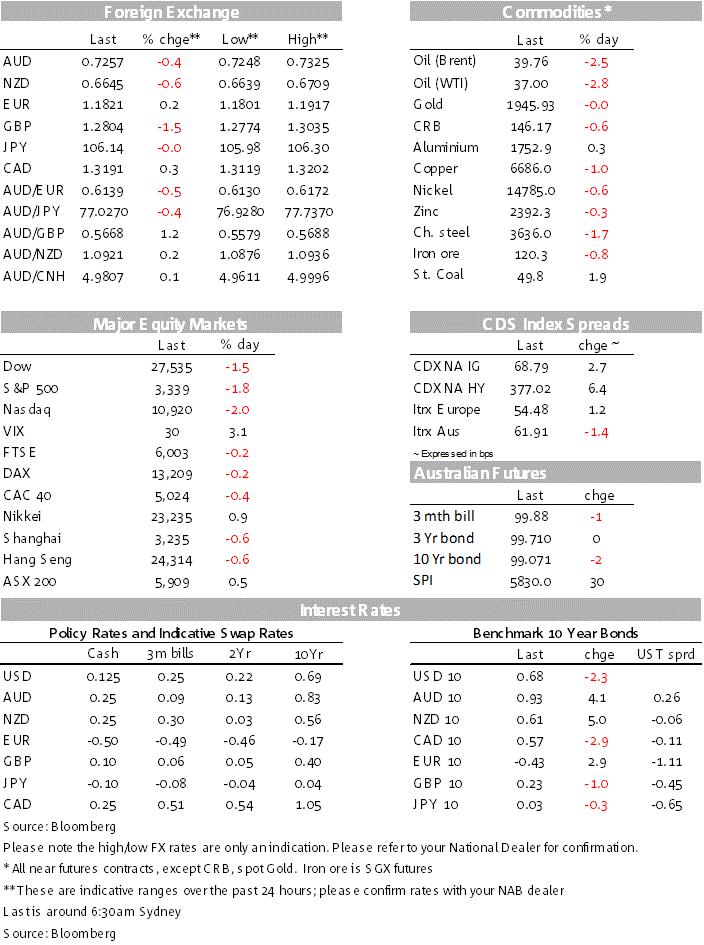