Brent Crude rose 20 percent at the market open on Monday morning, the biggest single move since the invasion of Kuwait in 1990.

Overview: All eyes on you

All eyes remain on oil prices following Saudi Arabia’s Abqaiq facility attack over the weekend. After surging close to 20% at the open, Brent and WTI oil have closed the day around 13% higher, recording their biggest daily rise since 2009. Question marks still remain on Saudi Arabia’s ability to restore Abqaiq’s oil output and the overall impact on global oil supply while the increase in oil prices also reflex a geopolitical risk premium. US and European equities closed a tad lower with energy and defensive sectors outperforming. NOK and CAD are the G10 outperformers with JPY giving back its safe haven bid. AUD is unchanged while NZD has drifted a bit lower.

After jumping nearly 20% at the open, oil prices eased almost 10% during the Asian session following reports that the supply disruption to the Abqaiq facility could be offset with stockpiles around the world in order to meet global oil demand. Oil prices then surged again during the overnight session following reports from Saudi Arabia suggesting  Abqaiq faced a “severe” disruption measured in weeks and months. Brent closed +13.09% and WTI was +12.96%.

The surge in oil prices also reflects an increase in geopolitical premium. For one the weekend attack shows Saudi Arabia’s vulnerability to more attacks while at the same time the US and Saudi Arabia are pointing the finger at Iran. Yesterday, President Trump threatened a military response (“locked and loaded”) depending on verification of the culprit of the attacks on Saudi Arabia’s oil supply. Since then, Saudi Arabia said that Iranian weapons were used in the attack and that the attack was not launched from Yemen, contradicting the claims that Houthi rebels were responsible for the attack. The WSJ reports “American officials say intelligence indicates that Iran was the staging ground for a debilitating attack on Saudi Arabia’s oil industry, and have shared the information with Saudi Arabia as both countries weigh retaliatory strikes”.

For now is probably safe to say that there is a lot that we don’t know and as such oil prices are likely to remain elevated and volatile. On this score, it is interesting to note that the Brent forwards curve is suggesting prices are only likely to head back towards levels seen last Friday around August next year.

Higher oil prices will have implications to the global growth outlook which was already facing a challenging environment from the ongoing US-China trade tensions. Price action overnight also helps illustrate the potential winners and losers. While US and EU equities closed only a tad lower, energy and defensive sectors such as utilities have outperformed. The S&P500 closed 0.31% lower but  the energy sector closed 3.29% higher, followed by real estate +1.02% and utilities +0.8%. Consumer discretionary (-1.31%) and materials (-1.63%) were the underperformers.

Looking at currencies, NOK and CAD have been the outperformers, both up around 0.3%. Early yesterday, JPY did show its safe haven attributes with USD/JPY losing close to 0.6% very quickly at the opened, however the pair has now given back all of its earlier losses to end the day unchanged. Perhaps reflecting the fact that Japan is still an energy exporter.

Similarly it is interesting to note that the EUR is amongst the biggest underperformers, down 0.65% to 1.1002. Some of the  weakness can be attributed to the new easing measures from the ECB, but like Japan is probably worth highlighting that Europe is an oil importer.

Meanwhile the AUD is essentially unchanged after having an up and then down and then up again session. Thanks to the increase in Australia’s LNG exports, the AUD appears to be showing a little bit of resilience to the move higher in oil prices. That said, if the surge in oil prices becomes sustainable, hampering an already subdued global growth performance, then it will be difficult to see the AUD retaining its resilience.

The NZD has underperformed, pushing down 0.55% to below 0.6350 this morning, the only puzzle being why it largely traded sideways through the Asian trading session. The relative terms of trade story on a sustained lift in oil prices justifies a weaker NZD in general and also helps explain the AUD/NZD outperformance with the cross now comfortably trading above the    1.08 mark.

GBP has reversed some of it recent outperformance, down 0.6% to 1.2420. Boris Johnson met EC President Juncker for the first time, with reports of a “constructive” meeting, although nothing substantial seemed to be achieved. Juncker’s team said that the UK has still not presented any proposals of a legally operational solution to allow the free flow of goods between Ireland and Northern Ireland. EUR is also on the soft side, down 0.6% to 1.1000.

US Treasury yields are down 4-6bps across the curve, with a slight flattening bias, seeing the 10-year rate down 6bps to 1.84%. All of the move reflects a fall in “real” rates, with implied 10-year break-even inflation flat at 1.68%. Germany’s 10 year rate is down 3bps.

There have been no key economic releases overnight while yesterday the key August monthly economic activity indicators for China were all below market expectations, providing further evidence of the trade war driving weaker growth and the economy showing a lack of response so far to a range of policy easing measures. Stimulus measures in China may need to be ramped up with inducements so far not enough to slow the drag from trade-sensitive areas. Now China also potentially has a new headwind from higher oil prices (China is the biggest oil importer). Softening growth in China (and the US) may motivate both sides to deescalate the trade war, though we still remain sceptical of a near-term deal that sees a reversal of the tariffs implemented to date 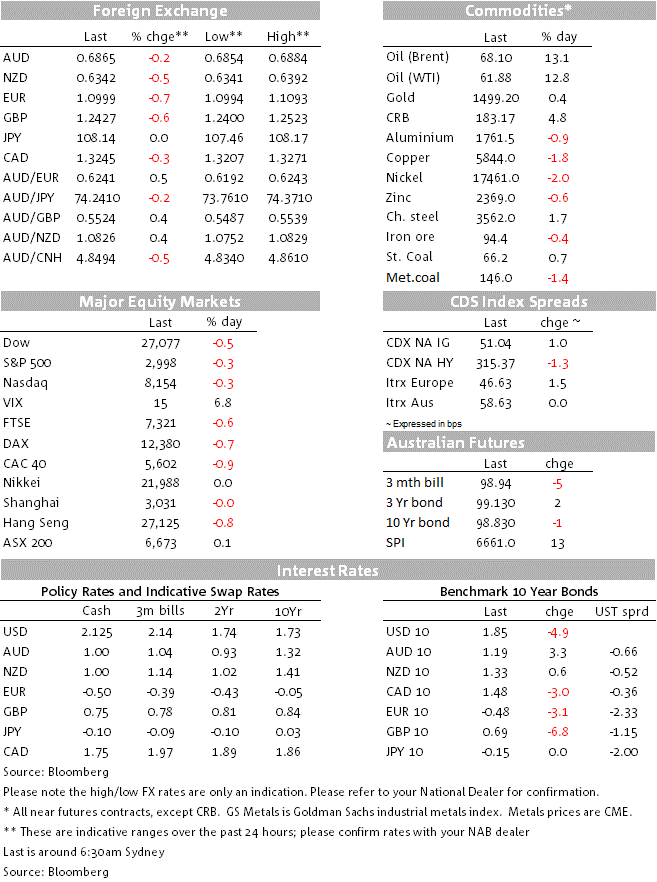